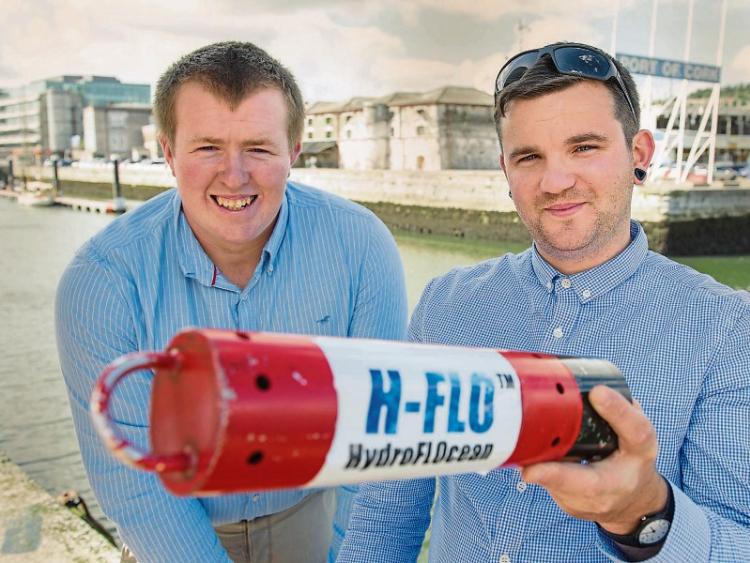 Gerard O'Connell and Arran Coughlan with their HydroFLOcean device

The marine safety innovation has won the prestigious Irish leg of the 2016 James Dyson award.

TJ O’Herlihy and Bryan Whelan drowned after their work platform collapsed whilst they were carrying out maintenance works on Thomond Bridge in August 2015.

Despite wearing life jackets, Mr O’Herlihy and Mr Whelan were secured to the platform when it fell into the water, which prevented them from swimming to safety.

The group of students, who attend Cork Institute of Technology, invented the HydroFLOcean as a response to the workers’ deaths, in the hope that it will prevent future tragedies of this kind.

The HydroFLOcean works by separating the worker from the platform when submerged in water. It is fitted between the harness and the safety cable connecting to the maintenance platform.

The device is made of two cylindrical metal shafts, connected by a stainless steel pin, and uses the same inflation device used in life jackets to activate a gas canister when submerged in water.

When put under water, the gas canister inside uses pressure to force the pin out, causing the device to split in two, separating the worker from the sinking platform.

Project manager Arran Coughlan said the idea came to the group in a brainstorming session shortly after they started back at college last year.

“The Limerick tragedy had only happened a couple of weeks before college started back, so it was pretty fresh in our minds. We were tasked with coming up with an innovative device, and it all took off from there.”

Four other Irish student inventors have been shortlisted to proceed to the international stage of the James Dyson award, including Mark Boda from University of Limerick.

His invention, the OmniDryer, dries clothes using 60 times less electricity than a standard tumble dryer by mimicking the natural process that occurs when clothes are hung out to dry, making very little noise in the process.