It's easy as A, B, C for Limerick Junior Cert pupils 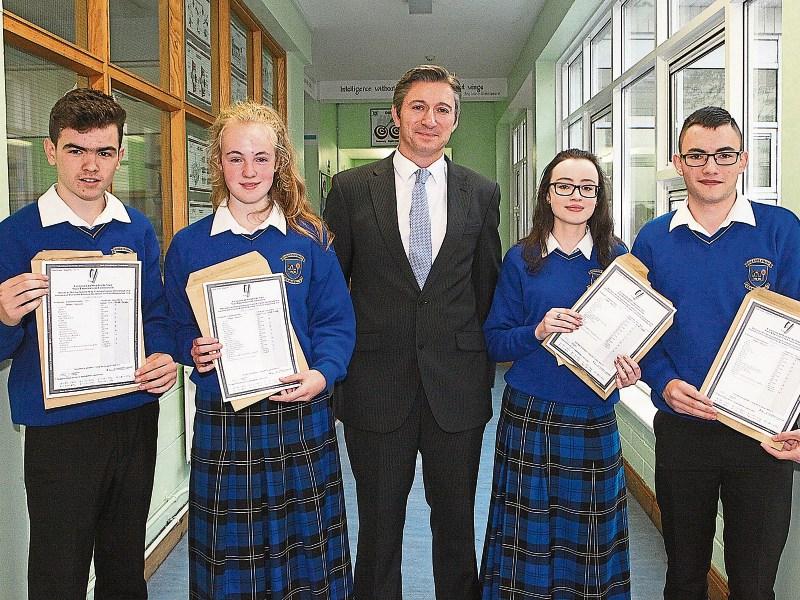 A TOTAL of 2,709 Limerick students took a major step on their educational journey this Wednesday when they nervously opened their Junior Cert results.

Like every secondary school there were shrieks of happiness, tears of joy and, perhaps, one or two of disappointment in Coláiste Iósaef, Kilmallock.  Grainne Barrett, aged 16, was definitely the former.

“I got seven As and three Bs. I am delighted! I am just really happy because I wasn’t expecting that. I started crying when I opened the envelope,” said the student from Athlacca.

Her voice shakes with excitement as she speaks to the Leader before giving the good news to proud mum and dad, Aine and Victor.

“I have to speak to them next. My dad is collecting me from school. My mum is working as a teacher so we are going to ring her together,” smiled Grainne.

Shane Enright, 15, from Kilmallock, also got seven As and three Bs but is as cool as a cucumber.

“It is better than I thought. I was surprised with some of the As but I did a lot of study. I rang my mum and dad, Eithne and Mike and they are delighted with them,” said Shane, who would like to study veterinary in a few years.

“Everyone is happy, there is no one disappointed,” he adds. Regarding celebrations, Shane says: “We’re going out tonight anyway!” Well deserved too.

Dylan Gubbins, Kilmallock, and Aine Ryan, Bulgaden, also have reason to celebrate after receiving six As and 4 Bs each.

“I was really surprised I got As in some subjects. I didn’t expect them in History and French,” said Dylan. But he will take them and is considering a future career in teaching or IT.

“I can’t believe it, I am still in shock. I worked really hard but I don’t know how I got that. I was really happy that I got As in Arts and History,” said Aine, who hopes to go to college in Dublin. But first things first is to tell her mum and dad, Anne and Robert, and grandmother, Peggy, her good news.

Indeed, one could argue the only melancholy face in Coláiste Iósaef was principal, Sean Twomey, as it was his last official capacity before heading off to classrooms new. He has seen the school population almost double in his six year tenure.

“There has been a lot of growth. We have a brand new building project due to start in the next couple of weeks. Unfortunately I won’t be there to see it come to fruition but I will be back for the grand opening,” said Mr Twomey.

He says he is very happy for the 81 strong Junior Cert class but the “most important thing is the kids are happy with them”. “They would have been a very good year group. They worked very hard and their results showed it,” said Mr Twomey.

Another proud príomhoide is Donncha Ó Treasaigh, of Gaelcholáiste Luimnigh. Four of his students achieved 10 As while 8 other pupils secured 9 As and a B.

But after the excitement dies down in every school, Mr Twomey stresses the Junior Cert is one thing but the Leaving Cert is the “major game in town”.

“It is about continuing and putting all that effort in once more. At the end of the day it is about reaching your potential and you only give yourself a chance to reach that potential by putting all that you can into it. For the ones that are disappointed the reality is life always offers a second chance and the second chance is the Leaving Cert. It is about knuckling down and getting into the hard work,” concluded Mr Twomey.

High hopes and jangled nerves made for a heady mix at Coláiste na Trócaire when the results were handed out.

But long before the appointed time, when principal Mary Kenneally and vice-principal Susan Browne took up position with their precious bundle of envelopes, students had queued along the corridor, edgily smiling and hugging and hoping.

“The sooner the better,” one girl muttered while another groaned about butterflies in her tummy.

But hope grew as, one after another, their fellow students emerged with big smiles, delighted with their success.

“It’s a lot better than I expected,” Matthew Lowry, Adare said. And he was particularly pleased with his A in English. “I found the exams hard but I thought it was good. It prepares you for the Leaving Cert.” 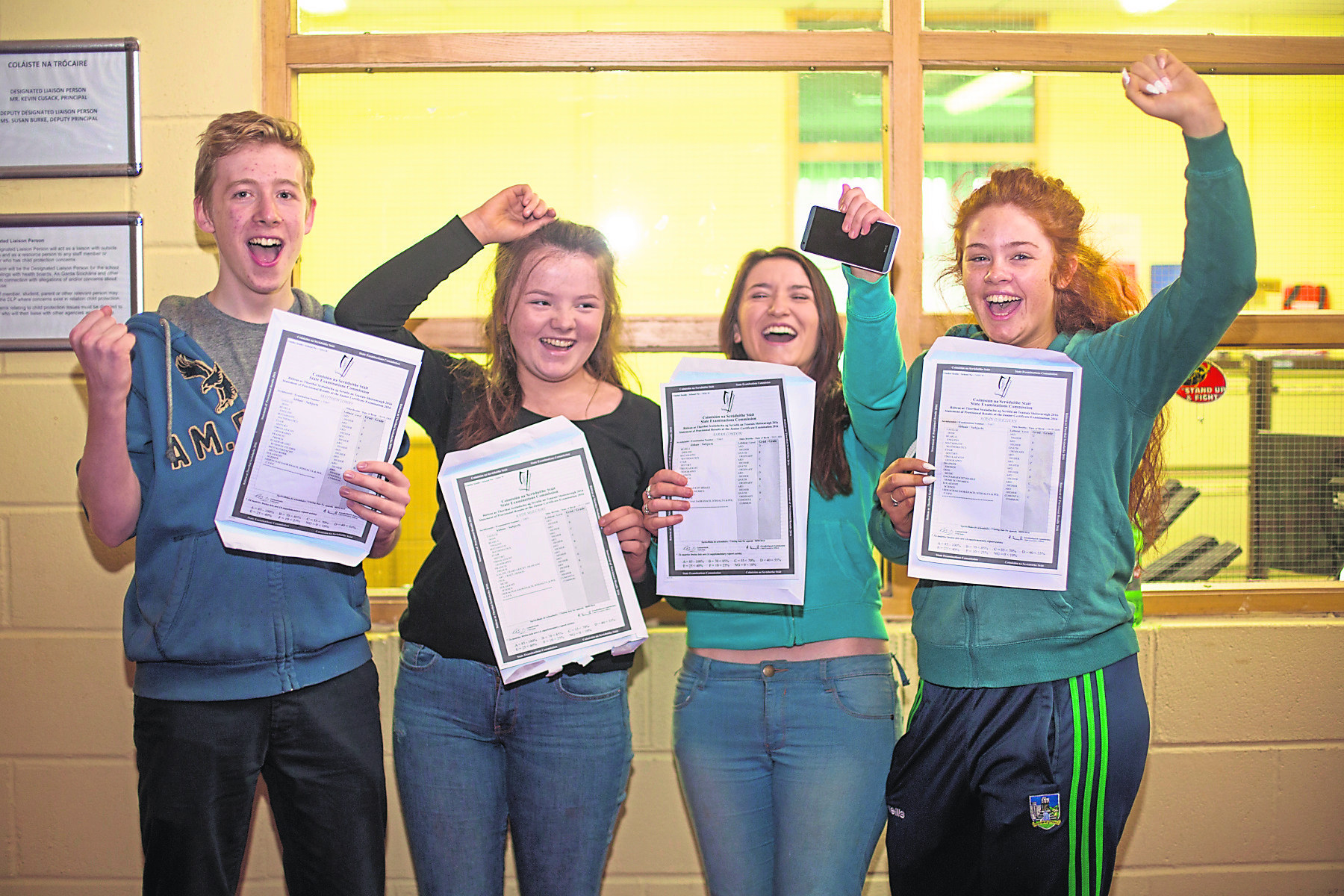 Matthew, who was planning to chill and relax for the rest of the day, is doing Transitional Year so doesn’t yet have to face making subject choices. Not so Eoin Sheahan from Ballingarry who went straight into fifth year with a very solid bunch of As and Bs under his belt.

“I am just exhilarated,” Aoife Murphy, Kilfinny beamed. She had nine As and one B to her credit and was absolutely delighted that she had exceeder her own expectations. Like her classmate Matthew, Aoife saw huge benefit in the Junior Cert. The exams, she said, were long but “I didn’t find any of them particularly hard.”

She already has a long-term plan for her future as a vet as has Holly O’Connell from Adare who admitted she was “very nervous” about collecting her results. “I didn’t want to get my hopes up. But I’m delighted. Thrilled.” She has gone straight into fifth year but said it was a bit difficult to make her subject choices without knowing her results. But, she said: “I had a good idea of what I wanted to do.”

Besides, she added: “I wanted to get back into study. I would probably get lazy otherwise.”

Nóirín Lenihan from Croagh, the first in her family to sit the Junior Cert, was particularly pleased with her A in history along with her 10 other honours while John O’Connor from Creeves was delighted with his success across ten subjects, particularly his A in Maths and Woodwork.

As his mother, Anne-Marie held the piece that won him that A, John explained that students were asked to create an item with a historical reference. He chose a 1916/2016 theme. “It was something I put a lot of work into,” he said. But he added, he worked hard too for his other seven As and two Bs.

“We are delighted,” principal Mary Kenneally said. “The students worked hard and we are delighted when it works out for them. And for those for whom it didn’t, they have another go.”

Students in the other second level schools in Abbeyfeale, Newcastle West, Dromcollogher and Askeaton were also celebrating results although some had to wait until the afternoon to know their fate.

Many of the students in the city received exceptional results, with two students in Villiers School – Vita Soldatkina, Caherdavin and Megan Coleman, Scariff – achieving an impressive 11 As each. 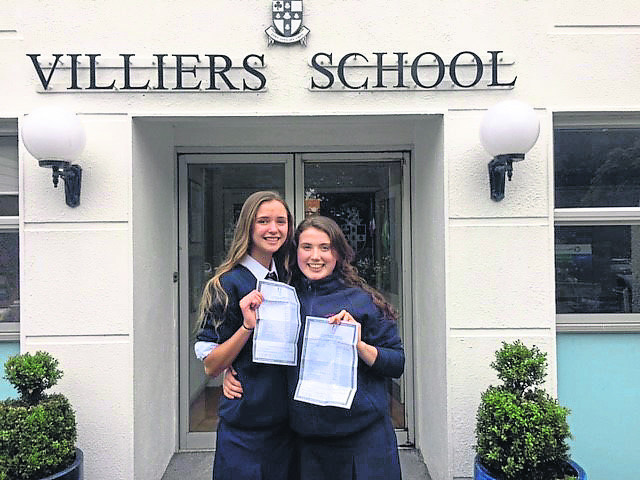 Gaelscoil Luimnigh also had four students who achieved 10 As in Juniuor Cert and eight other pupils secured 9 As and a B.

“We are very proud of our two students who have achieved 11 As each in the Junior Cert,” said delighted deputy principal Mary Quinn.

Over 80 students came to collect their results at the CBS on Sexton Street, where students of 37 different nationalities attend.

“We have plenty of Limerick students here but we also have students from a multitude of nationalities – Africa, Asia, all around Europe – and we make them all feel welcome,” said principal Denis O’Connor, who just took over the post this year. 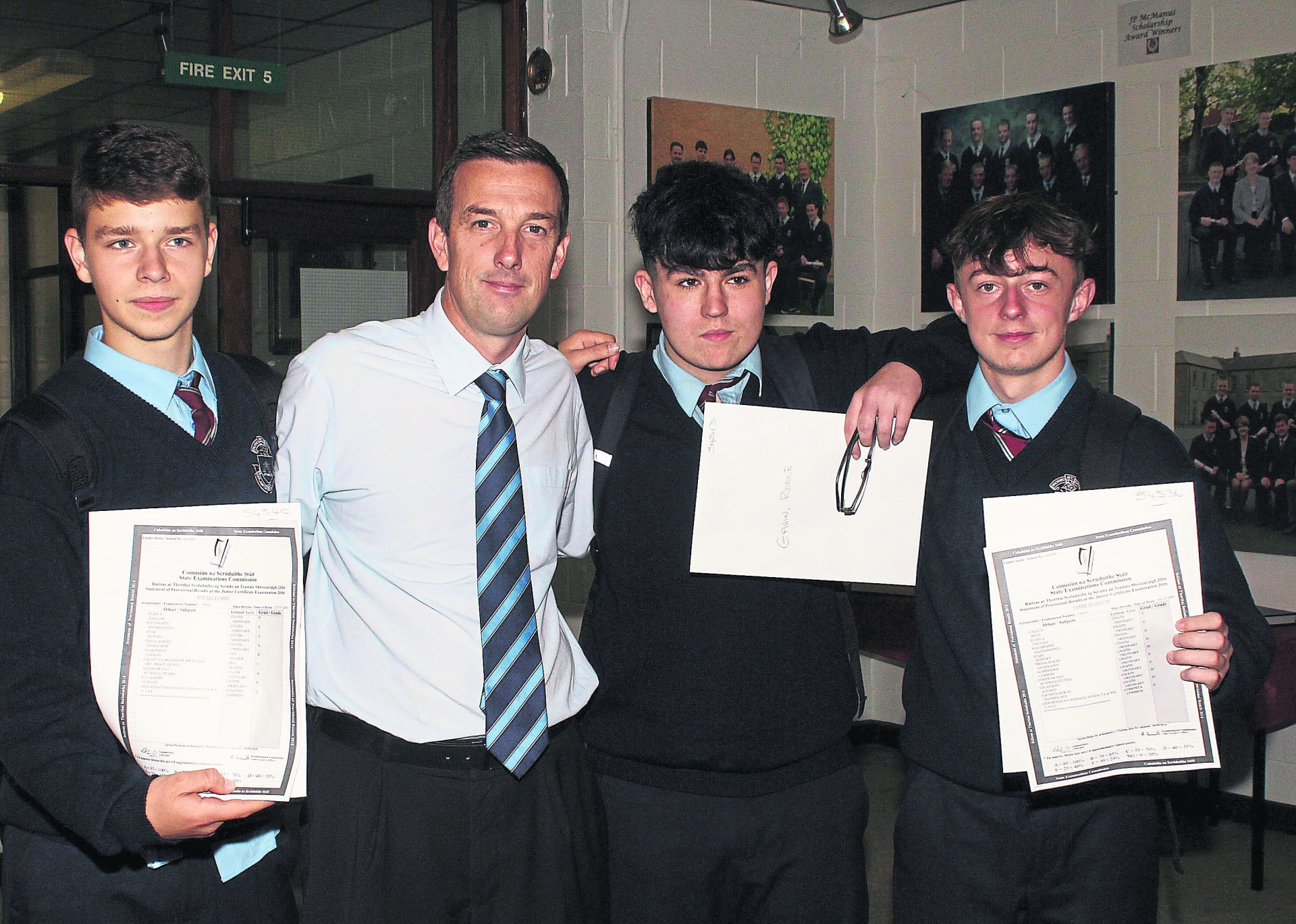 “I’ve only been principal here since the start of the year and I love it. The reason I love it is because of the students. It’s great to see the smiles on their faces and the effort being put in and now they’re getting their reward.”

Two especially happy students at the school were brothers Khalid (16) and Jamil (15) Muhammad, who joined mid-way through the school year after moving to Ireland late last year.

“We moved to Ireland before Christmas from Afghanistan,” said Jamil.

The two boys had very little English before starting at the school, but still managed to secure an impressive seven honours each in English, maths, history, geography, art, business and CSPE.

They both said that they were “absolutely delighted” to have achieved such high marks.

Khalid hopes to become a politician after school while Jamil wants to study business. They are currently living in Perry Square with their family.

“We like it here a lot in Limerick. It’s a really nice place. Everyone made us feel very welcome,” said Khalid.

He also said that his parents will be “very happy” with his results while Jamil Joked: “They will be surprised because I got good marks!”

The happiest student of all in Colaiste Nano Nagle was Magdalene Postawa from Sexton Street, who received the highest marks in the whole school.

“I’m really happy. I studied for an hour every single day and it paid off,” said the proud 16-year-old, who wants to study game development or computer programming.

“One hour was enough, I wouldn’t have been able to study for five hours!” she joked.

Her friends Shannon Hickey (15) from Garryowen and Rebecca Kiely (15) from Raheen were equally as excited.

“I was really happy with my results. They were better than I expected, I didn’t think I’d get so high,” said Ms Hickey, who wants to pursue a career in medical engineering.

I did much better than I was expecting as well. I put in a lot of study and it paid off,” added Ms Kiely, who wants to do cosmetic surgery.

“The students were delighted and the results were brilliant,” said proud deputy principal Brian O’Donoghue.

“It really sets them up for the leaving cert and it’s great to see so many happy faces.”