Tragedy of Rhodes fire is remembered in Limerick 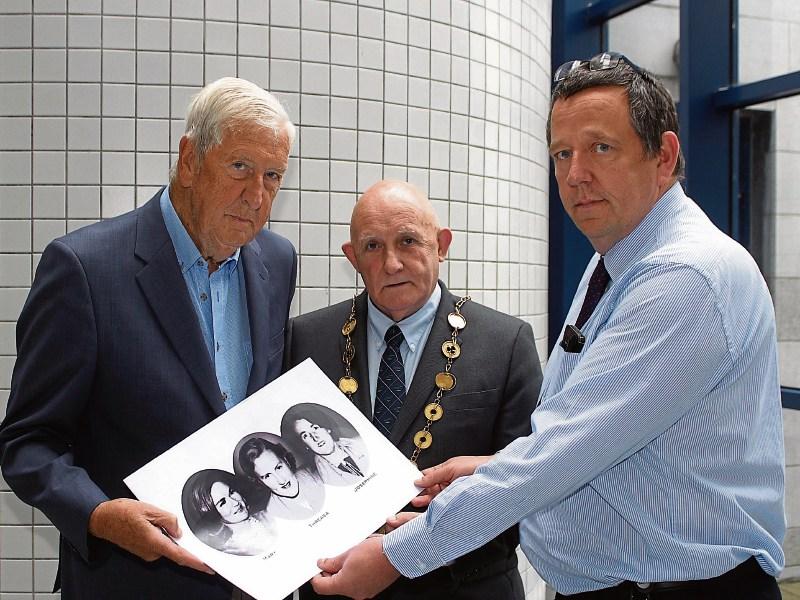 Denis O' Shaughnessy, Mayor Kieran O'Hanlon and Pádraig Power with a photograph of the three Limerick women who died

“WHEN those girls left home, nobody ever thought that it was their last goodbye.”

Mayor Kieran O’Hanlon spoke sorrowfully of the three Limerick women who died in a fire whilst on holiday, at a recent memorial service, saying that “it’s important to remember” the tragedy.

The service took place in City Hall for the women, whose lives were tragically cut short more than 40 years ago in Greece.

Theresa O’Shaughnessy, 39, Mary Allen, 40, and Josephine Deenihan, 40, died in 1972 when there was a fire at a restaurant on the island of Rhodes.

The women’s families attended the service to remember the three friends, who were on holiday together when they were killed in the blaze, which took 33 lives in total.

For the first time in 44 years, the tragedy will be recognised by Greece with the unveiling of a plaque later this month.

Mayor Kieran O’Hanlon, who attended the service and will travel to  Rhodes for the unveiling, said: “I am honoured as Mayor to be able to remember these people on behalf of the people of Limerick.”

Pádraig Power is Theresa’s nephew, and the driving force behind gaining recognition for the tragedy.

“We pursued it because there was no record of the event ever happening,” he said.

“We felt that the girls deserved some place in history and we’re very thankful to the Irish Department of Foreign Affairs and the Irish Embassy in Athens, who have lobbied on behalf of the family for the last three years to have the girls recognised so that they won’t be forgotten.”

Mr Power described the pain that the women’s families have endured since their deaths, saying that the plaque in Greece will provide some closure.

“I hope it will heal some of the wounds for the families, because it’s been very sensitive,” he said.

“We had to open up a lot of old wounds with our research in order to have the Greek authorities erect this memorial.”

“I hope the memorial will help to alleviate some of the pain and suffering of the last 44 years,” he added.