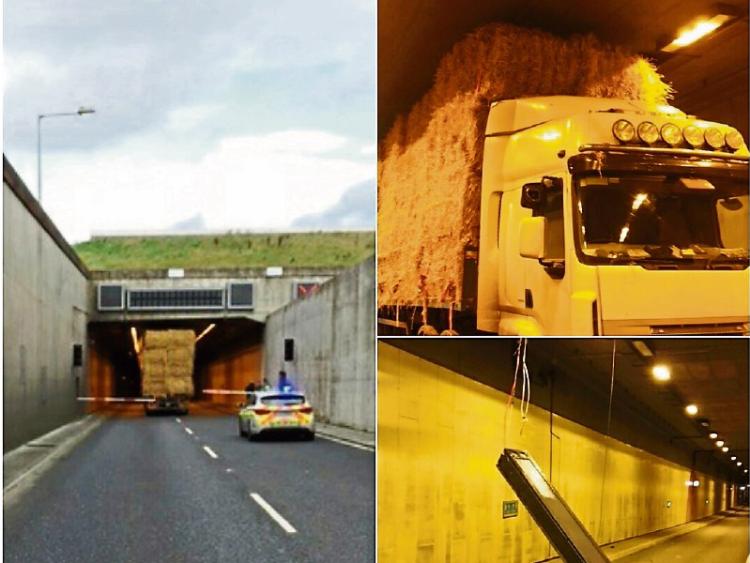 A truck carrying hay caused damage to the tunnel, creating travel chaos in the area

THE northbound side of the Limerick Tunnel remained closed this Monday morning leading to chaos for commuters.

A two-way traffic system was put in place yesterday evening following an incident in which an oversized truck carrying hay became stuck in the tunnel. This means the south-bound side of the link, normally two-lanes one way, is now one lane in each direction.

As a result of this, speed limits through the river crossing have been reduced to just 50 km per hour.

Operators DirectRoute (Limerick) have warned the contra-flow system will remain in place "for a number of days".

Due to tunnel closed NB, and the bad weather. Routes into Limerick city from Raheen are extremely heavy. @aaroadwatch

Declan Cahill, the chief executive of DirectLink, said the five-metre high truck entered the tunnel at 8.30am this Sunday.

The maximum height of vehicles in the tunnel is 4.65m, and – Mr Cahill claimed – the driver ignored the warnings, driving through the barrier at the entrance.

“We have had quite a substantial amount of damage to signs, lights and electronic system,” he told Live95FM news.

In a statement, DirectRoute warned motorists travelling northbound on the N18 to expect delays.

The company confirmed equipment in the tunnel damaged is being removed by specialist contractors.

“Replacement of this equipment will take a period of time. An assessment is currently being undertaken,” a spokesperson said.

Mr Cahill confirmed work to repair the tunnel’s northbound lane will take “a number of days”, with vehicles sharing the southbound road for the time being.

The company added: “DirectRoute (Limerick) Ltd apologises for any inconvenience this unavoidable disruption has caused to our customers. We will send further updates when we have more information.”

Meanwhile, there was a collision on the Caherconlish to Hospital Road at Herbertstown this Monday morning. Gardai and towing services attended the scene and it has been cleared.