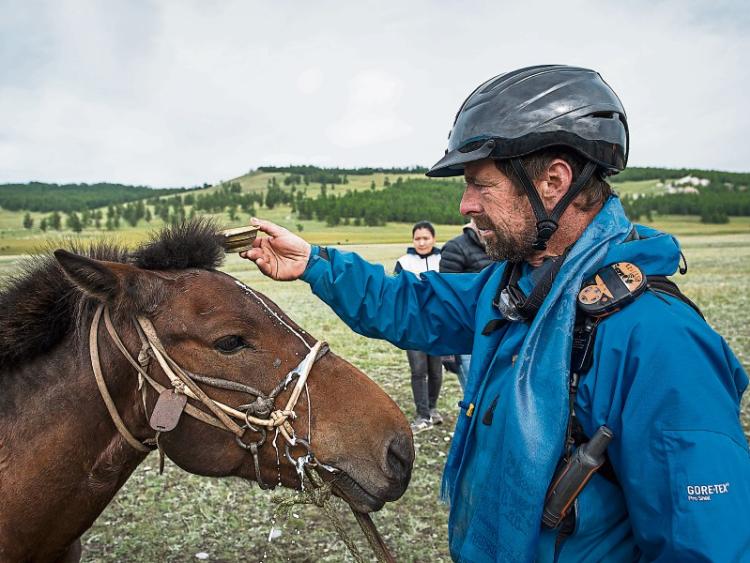 Man and beast as one: Peter pours water over his pony before quenching his own thirst

THE Mongolian Derby has no winners, only survivors.

“I’m alive, just about,” said Peter Molony, after completing the toughest racecourse in the world.

The route followed the long distance postal system set up by the infamous warrior and ruler - Genghis Khan - in 1224. Peter, owner of Rathmore Stud and manager of Spring Lodge in Manister, completed the 1,000km marathon to raise money for the Irish Injured Jockeys Fund. Peter sustained bruised ribs, slept in a cow shed and lost almost a stone in weight for a charity that is close to his heart.

He was part of a team from Qatar Racing that included joint owner of the global breeding and racing operation, Sheikh Fahad Al Thani and David Redvers, racing and bloodstock manager.

“Parts of it were very tough but overall it was an incredible experience and something I am delighted I did. I think this is the eighth running of it. It is becoming better and better known. People from all different aspects of equestrianism from eventers to show riders to endurance riders to racing people were involved,” said Peter, Irish representative of Qatar Racing.

Of the 41 who started Peter was one of just 19 who managed to finish.

They rose every morning at six, had a quick bite to eat if possible, packed up their belongings and were on their ponies at 6.50am ready to go at 7am on the dot.

“The ponies stand about 13 hands high. They are incredible animals to carry the likes of me. I was one of the heaviest people doing it. You had to be 85 kilos or under in your riding gear and I was 84 kilos [just over 13 stone]. We are just allowed to carry five kilos in your saddle bag. The ponies’ stamina was unbelievable,” said Peter.

The rules state that you are not allowed to start riding before 7am and you must stop by 8.30pm.

“Basically you would ride up to 13 and a half hours a day. It was a lot of cantering and galloping depending on the terrain. It varied from marshes to rocky ground to mountains to forest - everything. The ponies had no shoes so they were incredible - they have hard feet so to be able to handle all that and carry us…”

They would change ponies every 35 to 40kms.

“The ponies were tied-up, waiting for you. You picked one, tacked it up yourself and away you went.”

Peter’s years of working in the horse racing industry came in handy here as he could use his experience to pick the best one. However, he disagrees.

“It was a bit of luck of the draw - you try to pick fast ones, good performers, if their feet were well worn it meant they were well used, don’t pick a fat one, pick the lighter ones because they are fitter.”

As everybody was going at different speeds there was no guarantee where you would be sleeping at night.

“The derby organisers paid nomadic families to move to a spot which we called a horse station. Here you could change ponies and get something to eat. They live in gers - large circular tents - so if you were there at the right time you could stay with them.”

Otherwise it was every man or woman for themselves.

“Basically you would knock on somebody’s door and they would take you in. The people were incredible and fed you. Alternatively you found whatever bit of shelter you could find - one night David Redvers and I slept in the back of a Hiace van. I slept in a cow shed one night so wherever you could lay your head and get a bit of shelter.”

Mutton stew won’t be on the menu in the Molony household for the foreseeable future.

“That was the staple diet which was tasteless but hunger is a great sauce. You ate it when you got it.”

Peter overcame the mental and physical duress to complete the Mongolian Derby in eight days.

And even such an experienced horseman as Peter - who has jockeymanship in his genes from his legendary National Hunt jockey father, Martin Molony - had plenty of falls.

“Everybody did because the ponies are barely broken, they are half wild. You could be bucked off or the other big hazard was marmot holes. These are little animals that burrow into the ground and there are holes everywhere. So you are galloping across a plain, your horse puts its feet in a marmot hole and you go head over heels.”

Riders had to retire for a number of reasons including nasty concussions, dehydration and back injuries.

Despite being a relative newcomer to horse riding Sheikh Fahad lasted almost four days before injury stopped his quest.

Peter suffered bruised ribs but he laughs it off considering the charity he was raising money for - the Irish Injured Jockeys Fund.

“The charity is very close to my heart being neighbours of Robbie and the late John Thomas McNamara, and my father being an ex-jockey,” said Peter.

He certainly deserves every cent he gets for putting his body on the line and you can still donate by logging onto www.everydayhero.ie and searching his name.

To see more photos from the adventure of a lifetime see http://richarddunwoodyphotography.com