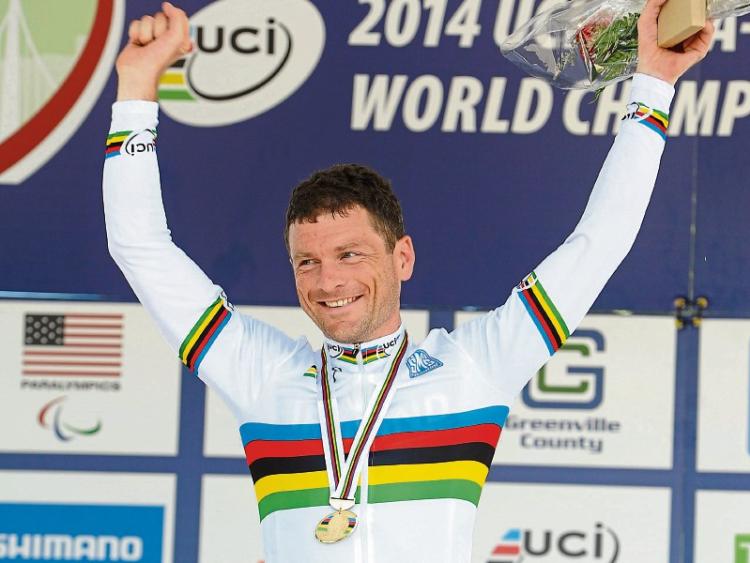 A WORLD champion cyclist from Bruff, who is gearing up for at least two gold medals at the Paralympic Games, has said that he is anxious to commence the races in Rio de Janeiro this week.

Eoghan Clifford, 36, will start in the velodrome this Friday with an high-intensity 3km speed race, followed by his key road races next week.

The NUIG lecturer, who joined the Irish Paralympic team in 2014, is the reigning world champion in the men’s C3 Time Trial competition, and is tipped to win gold in his inaugural Paralympics.

Speaking from Rio, he told the Leader: “I am waiting very anxiously to get started. There is a good bit of pressure on, and the sooner I get started, the better.”

In 1994, the gold medal hopeful was diagnosed with hereditary motor and sensory neuropathy (HMSN), which prevented him from engaging in contact sports, in his late teens.

“Cycling is not a contact sport, but you do crash a lot. So I have picked up more injuries cycling than I have in any other sport. It is a sport that suited me because it is very endurance-based, and it is a sport that you need to do a huge amount of training for, compared to other sports. It definitely suited me more than, say, rugby.”

One of the greatest challenges, leading up to the Paralympics, has been his balancing of work, exercise, and his family life. Eoghan has a 10-month-old daughter, Zofia, with wife Magda, in Galway.

“In all of the years where I have been doing sport or bike racing, this has been the hardest year. My wife just had a baby in November, and I have been away a lot. I travel a lot with work, also. It has been a very hard year, but I have had great support from Cycling Ireland and from NUIG, where I work,” he said.

Though he is delighted to be competing at the highest level, he is determined to bring home medals for Bruff.

“It’s fantastic to be here. But, as well, it puts pressure on you. Being here isn’t enough at this stage. You want to make sure that you perform and, to be honest, win medals. That is what I am here to do. It has been a great campaign.”

“On a good day, all going well, I could get a medal in all three. Possibly win all three, but that would require everything going right. But picking up two medals is within my reach,” he said.

Prior to his first race on Friday, the time trial and road race next week, Eoghan’s training routine will include light gym sessions, and moderate-to-hard cycling for up to two hours. And the day before his race, he will “take it easy” on the bike.

His proud father, Michael, who is a retired teacher, is flying to Rio with Eoghan’s brothers, Fergus and William this Thursday.

Eoghan’s mother Elizabeth, a retired nurse, sister Sorcha, and his wife and daughter will be supporting the Bruff Paralympian from the Galway Cycling Club.

Michael said: “This is what he has been working towards over the past two and a half years. The training has been everyday. There is no rest. And we spoke to him the other night, and we think he is very relaxed. We are absolutely proud of him.”

Aaron Tier, 21, from St Mary’s Park, is Ireland’s goalkeeper for the ‘Games.