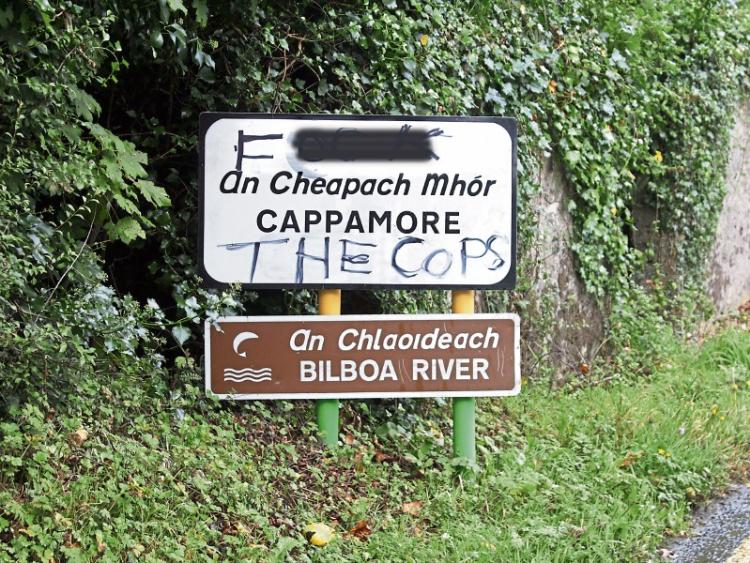 Graffiti - which we have partially blocked out - on a sign located on the Doon side of Cappamore.Picture: Michael Cowhey

GRAFFITI with an anti-garda message has emerged in east Limerick in the weeks following a major drugs find in the area.

“Fock the gardai” has been daubed on a Cappamore sign outside the village. Somebody then returned and wrote over it to correct the spelling, changing the O to a U.

Graffiti on another sign named a serving member of the force following by a derogatory comment on the outskirts of Cappamore. On the Limerick side of the village “IRA rule” was written on a sign.

Gardai dealt a “major blow” to a gang based around the Pallasgreen, Cappamore, Doon areas last month when they dug up cannabis herb, cocaine and prescription drugs in a field at Brook’s Bridge.

The graffiti started appearing since then and gardai are investigating if there is a link between it and the successful searches.

A garda spokesperson said graffiti is a criminal offence under the Public Order Act.

”We are investigating the matter and are appealing to the members of the public who may have witnessed the people doing this or know who they are to contact Bruff garda station, in strict confidentiality, on 061 382940,” said the spokesperson.

Deputy Mayor of Limerick City and County Council and local councillor, Noel Gleeson said he had seen the graffiti.

“Cappamore is a good community and we don’t want to see that happening. That’s the bottom line to me.

“They shouldn’t be interfering on signs – they are there for a purpose to direct people. I am going to contact the council to clean off the writing,” said Cllr Gleeson.

Deputy Niall Collins said he had been informed about the graffiti by constituents.

“The community is outraged at the lack of respect being shown to the gardai by some individuals. Gardai risk their lives on a daily basis to protect the public in the midst of a major lack of resources.

While no arrests have been made to date following the major drugs seizure it is understood that gardai are following a number of definite lines of enquiry.

At the time of the find, Chief Superintendent David Sheahan commended his officers on “excellent police work”.

He said the investigation has been ongoing since a large community meeting in Doon last year. This was in relation to a spate of hay barn fires that caused fear and anxiety in the area.

Chief Supt Sheahan thanked the community for their help and assistance and for standing with the gardai.