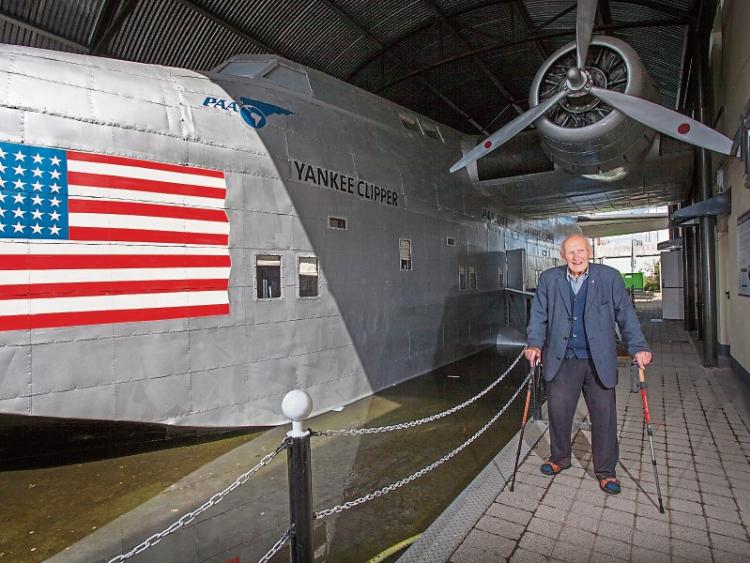 Standing beneath the fuselage of the replica Yankee Clipper in the Foynes Flying Boat Museum, John Walsh is transported back to the glory days in Foynes when it was truly the crossroads of the world.

He was in his early 20s in 1937 when the Short flying boat, Caledonia, completed the 1,900 mile flight across the Atlantic from Foynes to Newfoundland.

At the time, his father was the manager of the BP terminal in the village.

“I would have pumped petrol into the Caledonia,” he said.

Born in Clonmel, Co Tipperary, John moved with his family to Foynes in 1927 after his father was appointed manager of the BP terminal.

The remarkably fresh and active 100-year-old recently made headlines after buying an electric car. Last week, he returned to the village in which he grew up and paid a visit to his old home, which now forms part of the museum.

“We spent the first night or so in a little hotel near the Post Office and backing up on to the railway, and then took up residence in part of the building known as the Hotel,” he recalled.

Since getting in touch with museum director Margaret O’Shaughnessy some years ago, John has become a regular visitor to Foynes and always looks forward to his trips there. “While I lived in Foynes I never really became a Foynes person, but by God, I am really in there now,” he said.

His memories include watching the big oil tankers unloading their cargo at the port before undertaking the tricky process of turning around and setting out to sea again. “It was quite spectacular with the bigger ships and tricky if there was a westerly wind counteracting the tide,” he said.

Another memory is of meeting the renowned sailor Conor O’Brien - who some years previously had made headlines for his successful circumnavigation of the globe - at the port. However, the maritime legend’s rather earthy language left John cold.

“Of all the foul-mouthed sailors, he must have been the king,” he noted.

Having spent much of his teenage years in Foynes, John then took up an accountancy apprenticeship in Limerick city. It was there he met the woman that would later become his wife, Brigid, or Ciss as she was known. After moving to Dublin with his job, John continued to travel to Limerick regularly to meet Ciss, whom he married in 1943.