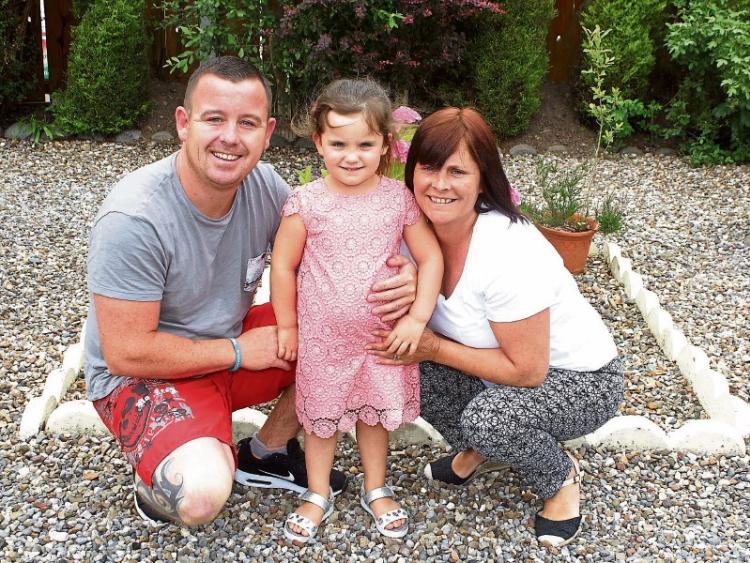 A LIMERICK mother who suffered seven miscarriages and the loss of a prematurely-born baby has described the HSE’s newly launched national standards of bereavement care following pregnancy loss and perinatal death as “badly needed”.

Noreen Thompson, Murroe, had the miscarriages and a premature baby who died shortly after being born, before Ellianna was born to herself and husband Ger four years ago .

The changes, she said, were a brilliant idea and could “definitely help people and improve things” for those who have suffered pregnancy loss.

The standards, which will impact the hundreds of Limerick parents who are affected by this type of loss each year, will establish how parents who experience loss through miscarriages, ectopic pregnancies, stillbirths or perinatal death will be treated and supported in each of the maternity hospitals around the country.

While Mrs Thompson spoke highly of the help she received from hospital counsellors to cope at the time of her losses, she believes the updated standards would have benefited her when she went through that difficult time.

“You feel that you’re on your own when these things happen. You feel like there’s nothing there to help you through it.

“A lot of people wouldn’t take it [the counselling] because some people find it hard to talk about it or might not know what services are available to them.”

Clinical midwife manager and bereavement midwife at the University Maternity Hospital Marie Hunt said that the standards will provide “specific rules and guidance about the standard of care that should be given for bereaved parents” and will see “specialised bereavement care teams” introduced in the hospitals.

“The aim is that these teams will be composed of a clinical midwife specialist and a bereavement care coordinator to implement these standards,” she explained.

The updated standards, she said, will focus on four main elements: bereavement care, the hospital, the baby and parents, and the staff. With regard to bereavement care, they will involve “supporting and providing compassionate care for parents and how we would go about that,” she explained.

They will make sure that the hospital “will have systems in place to ensure that the bereavement care and end of life care for the babies is central to the mission of the hospital and is organised around the needs of the particular baby and their family”.

In relation to the baby and parents, they will ensure that “each baby will receive high quality palliative and end of life care that is appropriate to his or her needs and to ensure that there is compassionate care and comfort provided for babies born with a life-limiting condition or who may not survive after birth”. They will also give “care for the family and provide counselling throughout the pregnancy”.

They will also require that all “staff must have education and training to make them aware of the fact that we need to provide care for these families and staff will be supported in providing that care,” said Ms Hunt.

One of the main changes that the new standards will bring about, she said, is “the structure of the hospital for us here in Limerick.

The highly anticipated new hospital, which will be based on a site alongside the University Hospital Limerick, will be designed to ensure that at no point will “a bereaved parent going to come across somebody who is pregnant,” said Ms Hunt.

The updated standards will also change how the parents are informed about the condition of their babies.

The standards, she said, will give “guidance for the hospital and the professionals on the standard we should be aiming for, for this particular group of parents.

“From the time they come into the hospital, the aim is that they would be greeted with compassion from all staff, and that we create an environment where everybody feels safe and supported in their grief.

“We also acknowledge that their loss is huge and has a huge impact on them and we care for them in a very sensitive way and create a sensitive environment for them.”

Mrs Thompson spoke highly of the counselling services already available at the hospital and encouraged parents to avail of them.

“We [Noreen and her husband, Ger Thompson] did use the counsellor there at the time. She was actually very good. She’d always ring up if she didn’t hear from you to see how things were going and I’ve never had a problem with them. It did help big time,” she recalled.

“Because I suffered so many miscarriages over the years, it did help to talk to someone, because a lot of people don’t talk about things and try to just get on with their lives. It was nice being able to talk to a stranger because I think that you get more out and feel more comfortable when you’re in a room with someone who knows what they’re talking about.”

Mrs Thompson added that there “definitely could be improvements”, and hopes that the new national standards will benefit parents in Limerick who experience this terrible loss.