Strategy aims to deliver thousands of homes for Limerick 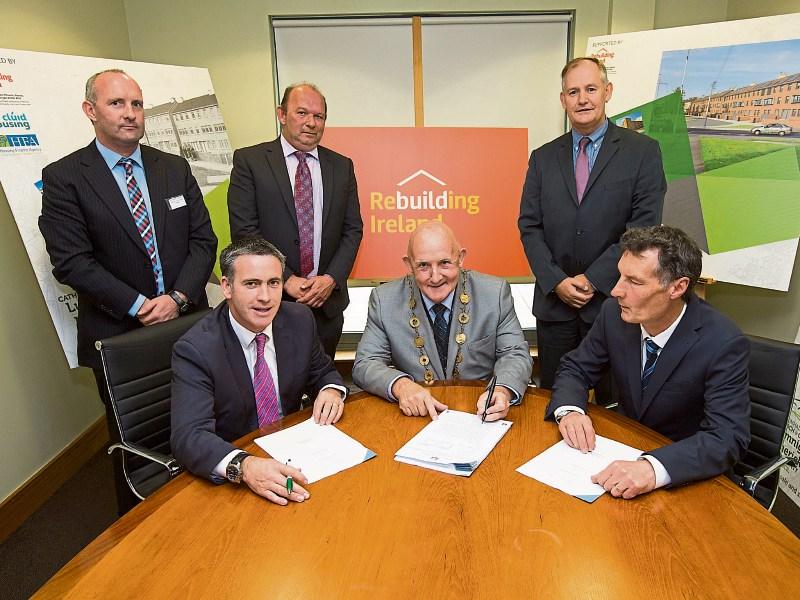 A COMPREHENSIVE new strategy, which aims to deliver thousands of new social housing units in Limerick by 2021, has been launched this week.

Environment Minister Simon Coveney was in the city to launch the Limerick aspect of the Rebuilding Ireland – Action Plan for Housing and Homelessness, which promises 47,000 new units nationally in the next five years.

It is not yet clear how many of these will come to Limerick, but City and County Council is to be asked to submit its plans to the Department of the Environment in quick order.

Vacant units will be brought back to life, while Mr Coveney said it will be up to Limerick council to decide whether modular homes are appropriate.

And Mr Coveney said although it is too early to predict how many units Limerick council will be tasked with delivering, he would be effectively ‘naming and shaming’ local authority who do not meet the targets to be set down by the Department of the Environment.

“We want to make sure Limerick council does what it says it is going to do. We have asked all the local authorities to come back in writing with plans around social housing provision, working with approved housing bodies, the private sector, and building directly themselves,” he said in an interview with the Limerick Leader, “We will publish what each local authority is doing so everyone will see the top performing local authorities.”

His Junior Minister Damien English added: “Those who deliver the most will get the most. If you’re not a productive county, you won’t get the resources.”

For its part, Limerick City and County Council – which has 4,434 people on its housing waiting list – has expressed confidence it can deliver the targets in the action plan.

Chief executive Conn Murray said: “Limerick is ideally placed to deliver on the objectives of the plan and with central government support I am confident we have the capacity to deliver.”

“If you look at Limerick, there isn’t a shortage of land. There is about 400 hectares of zoned greenfield housing land, and there is around 40 hectares of infill brownfield land. These are quite big tracts of land where you can build mixed tenure estates, social housing, and private homes for sale,” Mr Coveney said.

In a presentation, Limerick council outlined 23 sites in Limerick City it had identified to build social housing on, which could bring 359 units initially, as well as two sites in Newcastle West, which could see 25 new units brought in.

It was also revealed that one in every ten housing unit in Limerick is vacant, a total of 11,709 units.

On top of this, the Cork-based minister has revealed plans for a €200m infrastructure fund to possibly get many private developments completed.

The money, which will include a contribution from the local authority, could be used for bridges, road connections or water mains.

“One of the many reasons a lot of private developments have not been happening is due to the cost of infrastructure. So the state will pick up some of the cost of developing necessary infrastructure to get projects moving,” he said, pointing out that developers will be able to submit bids to the department from next week.

Mr Coveney and Mr English were greeted on their arrival to Limerick by demonstrators protesting a perceived government row-back on rent controls.

In response to this, Mr Coveney said he had committed to a new rental strategy by the end of the year.