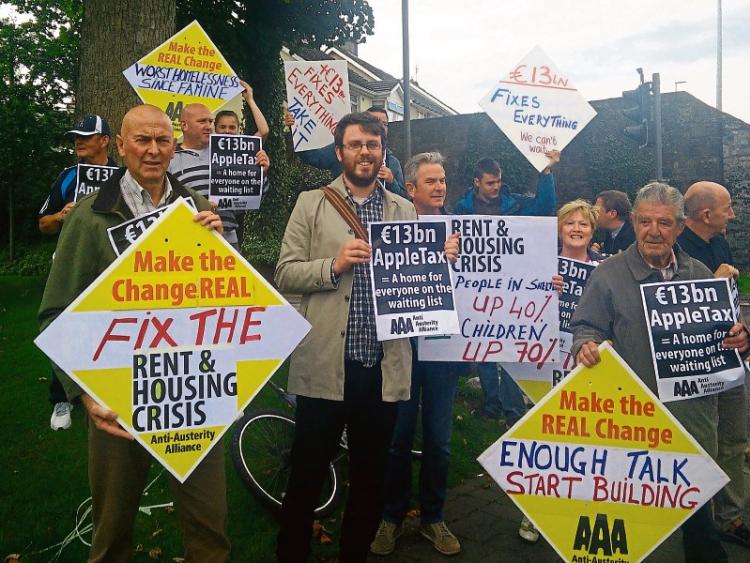 Members of the AAA, including Cllr Paul Keller and Cllr Cian Prendiville, staged a protest during the visit of Minister-of-State Damien English

A SENIOR academic at the University of Limerick says she sees the logic of Ireland appealing this week’s ruling of the European Commission that Apple received more than €13bn in illegal State over a ten year period.

Sheila Killian, Assistant Dean of the Kemmy Business School says the ruling, which was delivered by EU Competition Commissioner Margrethe Vestager has created uncertainty which may be clarified by an appeal.

Reacting to the announcement, which was made in Brussels on Tuesday she said the decision will have implications in Ireland and right across the globe.

“There are wider implications for the world in general and the amount of tax that Apple should pay and obviously they should not be able to churn most of their profits through any country without paying tax on it – that’s obvious,” she told RTÉ radio.

Members of the Cabinet attended a special meeting this Wednesday during which Minister Michael Noonan recommended that an appeal be lodged with the European Court of Justice.

“Our tax system is founded on the strict application of the law, as enacted by the Oireachtas, without exception,” he said on Tuesday adding that he believes an appeal is necessary to defend the integrity of the Irish tax system.

Following the Cabinet meeting, members of the Independent Alliance sought the recall of the Dáil to discuss the matter.

Meanwhile, Ms Killian says one thing which might be helpful would be to change the status of tax rulings, such as those relating to Apple. “There is a strong argument for making tax rulings publicly available which would certainly limit the amount of things which companies would seek rulings for,” she said adding that such rulings are ‘opaque’ as they are specific to individual companies.

Meanwhile, members of the Anti Austerity Alliance (AAA) staged a demonstration during a visit of Minister of State for Housing and Urban Renewal Damien English to the city this Wednesday.

Cllr Cian Prendiville who took part in the protest outside the Strand Hotel says the government should spend the €13bn owed by Apple.

“Instead of appealing this decision, and trying to hand the money back, the government should take as much of the money to invest in housing and other public services. This is more than enough money to build a house for each and every person and family on the housing waiting list,” he said €200 billion,” he said.