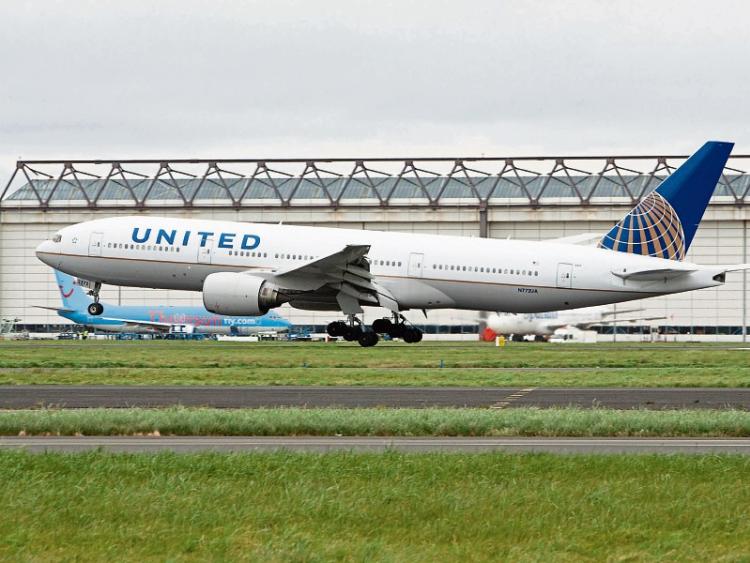 A previous United Airlines plane leaving Shannon. A flight was diverted to the airport after a 'medical situation'

FOURTEEN passengers and two crew on a United Airlines flight have been hospitalised at University Hospital Limerick hospitalised this Wednesday after a plane was diverted to Shannon Airport following ‘severe turbulance’.

United Airlines flight (UA-880) was diverted while it was en route from Houston to Heathrow.

The Boeing 767-300 plane – which had 207 passengers, a cockpit crew of three and 10 flight attendants on board – was diverted after “severe and unexpected turbulence” caused a medical situation on board.

A spokesperson for the airport said the flight was “diverted to Shannon Airport with a medical situation and landed safely at 5.55am.

“HSE ambulances were at the scene to meet the flight. Passengers and crew were treated at the airport and subsequently fourteen passengers and two flight crew were transferred to University Hospital Limerick,” added the spokesperson.

The airline confirmed that turbulence during the flight caused the medical situation.

A spokesperson for United Airlines said it was "providing care and support to customers and crew of flight UA880 which experienced severe and unexpected turbulence during a flight from Houston to London Heathrow today.

"The aircraft diverted to Shannon Airport in Ireland where it was met by medical personnel. 14 customers and two flight attendants have been taken to a local hospital. We wish these passengers and crew a quick recovery from their injuries."

A spokesperson for University Hospital Limerick explained: "When the aircraft landed, initial assessment was carried out by the National Ambulance Service and airport first responders.

"A total of 12 people were transported to hospital, nine adults and three children. Two of the 12 were crew members.

"The casualties in the main presented with soft tissue injuries, minor head injuries and lacerations. As of 10.30am on Wednesday, one patient was still being assessed and the remaining 11 were discharged.

"Hospital staff are working with the airline to transport the passengers back to Shannon Airport to continue their onward journey to London."