RETAIL: EPONYMOUS RECORD SHOP TO CLOSE ITS OUTLET AT THE CRESCENT SHOPPING CENTRE 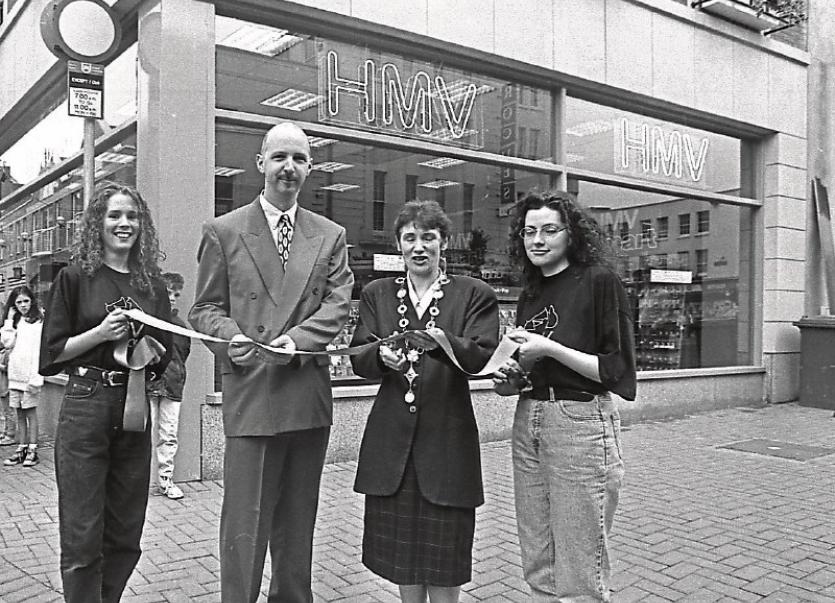 Then mayor Jan O’Sullivan cuts the ribbon at Limerick’s first HMV store at its opening in 1992, with general manager Alan Townsend and staff Roisin O’Brien and Sheila Whyte

THE last remaining HMV store in Limerick, in the Crescent Shopping Centre, is to cease trading this Wednesday.

Restructure specialist Hilco capital, the firm which took the HMV brand of receivership in Ireland in 2013, is bringing down the shutters on the music store as August comes to a close.

The firm had held a huge clearance sale in recent weeks.

Although there are still some small music outlets in the city, the closure of HMV means Limerick has lost its last mass-market music retailer.

When Hilco re-opened HMV three years ago at the Crescent Shopping Centre, some 20 jobs were created.

It is unclear now how many jobs will be lost, but the Limerick and three other stores HMV is closing – in Dublin, the Liffey Valley, and Dundrum – employ 45 people in total.

Hilco Capital has taken the decision to close all the branches after it ended its Xtra-Vision operation earlier this year.

Many branches of the video rental chain – including the one nearby in Dooradoyle – had an HMV presence.

“Obviously my thoughts are with the staff. A lot of them would have been working with HMV for a long number of years. It is sad they have to go through [losing their job] for a second or third time. I just hope they can secure appropriate terms of employment,” he said.

He added: “As a music fan myself, and someone who uses CDs a lot as opposed to MP3s, it is a big loss to the city. It was the last place you could pick up a CD with such a wide range and offering, so it is a big loss in that sense.

The British music retailer’s two Limerick stores – in Cruises Street and the Crescent – first closed in 2013 after its Irish operation collapsed into receivership recording substantial losses.

Staff at Cruises Street and in the Crescent Shopping Centre staged a sit-in protest at the time in a bid to secure their redundancy dues.

In a sign of the times, the landmark unit – first opened as HMV in 1992 – is now a branch of Costa Coffee.

Although HMV is closing, Steamboat Music, at Steamboat Quay, says it is opening an extension to its business near the Clarion Hotel “to ensure Limerick is not left without a music store”.

This is to open by late September.