Regeneration funds worth €410k went into Limerick City of Culture 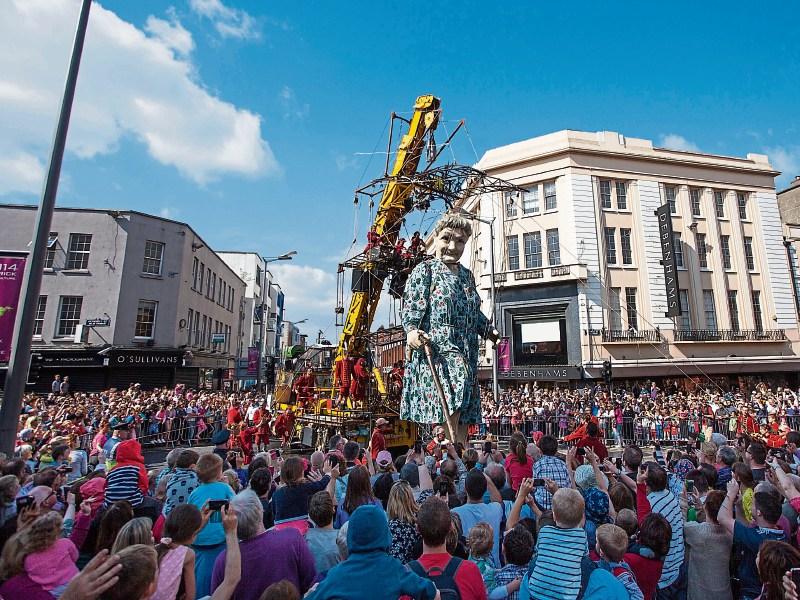 A Giant event: Royal de Luxe was one of the major successes of City of Culture, a fact noted in the report

LIMERICK City and County Council pumped €410,000 of Regeneration funds into Limerick’s stint as National City of Culture in 2014, a new report has revealed.

The figures are contained in an Ex-Post Evaluation of City of Culture, carried out by the Department of Arts, Heritage, Regional, Rural and Gaeltacht Affairs.

Responding to a query about this use of funds for the project, a council spokesperson said: “The council is also very pleased with the impact the use of Regeneration funds had in terms of social engagement, social inclusion and specific projects within the regeneration areas.”

The report adapted the evaluation framework used to analyse European Capitals of Culture to review Limerick’s stint as national City of Culture, a fact that the Leader understands has irked some in the local authority, believing them not to be a “like for like comparison”. Budgets for Capitals of Culture are in the main many times that of Limerick’s total expenditure of €10.9m in 2014.

However, the report is reasonably favourable, concluding that the city “performed well against international comparators in the proportion of funding assigned to the cultural programme”. Yet, it concluded that the level of expenditure on marketing and communications – at only 3.7% of total expenditure – was not in line with an EU Capitals of Culture average of 14.46%. There was criticism during the year of culture of a perceived lack of marketing.

The council spokesperson said that the local authority was “satisfied that we delivered an exceptional year of events with the level of funding received in such a short lead-in timeframe”.

“The year has also lead to a greater understanding of the huge value and impact culture can have on society as a whole within the council,” it said.

Analysing the level of sponsorship the year of culture received – €1,230,791 – the report reveals that City of Culture engaged a marketing company to enhance its ability to secure sponsorship at a cost to the organisation of €55,664 – made up of contract payments of €30,664 and a legal settlement of €25,000 in respect of a disputed performance bonus under the contract. This was E Merge Marketing Communications, owned by Liam Gaskin, it is understood.

The council spokesperson said “a company was awarded a tender to raise sponsorship for the year-long event. Following the end of the year, they contested an amount of sponsorship-in-kind as income generated and anticipated a percentage of this. This figure was queried by Limerick City of Culture and following legal exchanges a settlement of €25,000 was agreed”.