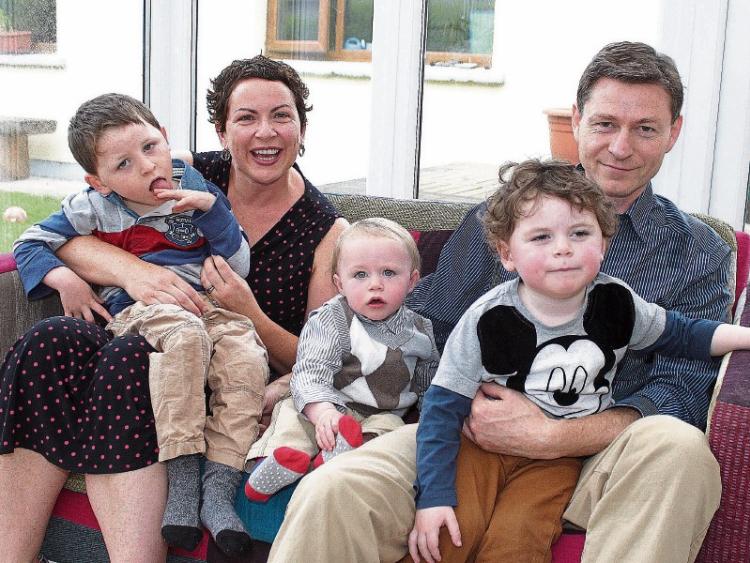 “HE just ran ahead of us and stepped into a lift”.

Martina Collins is sitting in the living room of her home in Farranshone six weeks after her middle child Neil, just two-and-a-half years old, made headline news after falling from the top of the Strand Hotel.

Martina, with husband Michael, arrived in the hotel lobby for a community coffee morning on Saturday, July 2 when Neil ran ahead of them looking for adventure, as toddlers often do.

With the lift doors closed, Martina immediately got into the other elevator.

Taking up the story, she said: “I knew he had gotten into one lift, so I got into the other lift, and went down. He was going up at the same time. But I didn’t think he would be able to get up to the top floor.”

But this is exactly what little Neil did, wandering out onto the sixth floor balcony oblivious to any danger.

From there, he fell to a concrete area on the first floor of the hotel.

In the crucial moments following this, an American nurse, Julie Genova, who was on holiday in Ireland and visiting Limerick at the time, came to administer aid to the toddler, before he was rushed by ambulance to University Hospital Limerick.

In the midst of the shock, Martina – a full time carer to her eldest child Mairtin, who has cerebral palsy – said she took some comfort in the fact she could still hear the toddler’s cries.

She said: “I heard him moan when we were waiting for the ambulance.”

Her husband Michael, who works for Irish Aid in Henry Street, said the parents’ first concern was whether their son would be brain damaged.

“When the ambulance took him to the hospital, the staff, even at that stage, had indicated to us that he would not be,” he said.

After spending a night in UHL, Neil was transferred to Temple Street Children’s Hospital in Dublin, where he spent five weeks in the intensive care unit, where doctors monitored his amazing recovery. He was in an induced coma for over 70 hours.

The family arrived back to their home on the northside of the city this week, and, from looking at Neil, it is hard to imagine he has had a near death experience.

He runs around, giggling, and playing happily with his teddy bear Lola, and his two brothers, Mairtin, 5, and Billy, 1, while his loving mother occasionally shouts ‘Macca Pacca’, or ‘Iggle Piggle’, or sings the ‘Itsy bitsy spider’ to get their attention.

Amazingly, Neil bears no physical scars from his fall.

But, his family say, he has damaged two ribs and two vertebrae, and a bone in his pelvis. As well as this, he has lacerations in his liver, kidney, spleen as well as a fractured skull, but thankfully no brain damage.

“He has suffered to put it mildly,” Martina says.

“It is early days, and we are a little bit unsure. He is still getting medication. We are not certain about what future he will have, but hopefully it will be normal. But we are uncertain at this stage,” Michael adds.

Neil appears blissfully unaware of his experience, and the new found attention being lavished upon him – the family have received many visits from well-wishers keen to meet the lad who has become known as ‘miracle boy’, while he has been given many gifts including a hi-tech present from Martina’s sister Brenda. “I don’t know many other two-year-olds with a tablet,” his mum laughs.

When I ask Neil himself if he realises how well-known he has become in Limerick, he points at my silver microphone, chuckles, and inquisitively asks: “What’s that?”

With three young children, Michael and Martina have their hands full.

“It is challenging enough, as I have one child who is stationary [Mairtin], and two who are mobile. It is hard going. I probably would not have gone to the Strand Hotel that day, only that it was a community coffee morning. It is a lovely morning, and it is nice to get out,” she says.

While the family are keen to ensure their kids are able to be kids, they will be keeping an extra specially close eye on them.

“They can have their childhood out there, where we can see them,” Martina says, gesturing to the large garden to the rear of the home, “They are not going to leave our sight.”

Martina has received letters and emails from parents around the country expressing solidarity with her family.

But it is the support from Limerick folk which has most touched them.

While young Neil lay in hospital, over 200 people attended a Mass at their local St Munchin’s Church, while on their mantlepiece are good wishes cards from across the community.

“We are amazed at the interest in this story. But we are also very thankful for the support of our neighbours here, and Fr Pat Seaver and Fr Donal McNamara. The messages of goodwill were just overwhelming,” Michael says.

Martina – who hails from Castletroy, but has lived in Farranshone for seven years – added: “I am a very proud Limerick woman. I am so grateful for my city. I really felt Limerick behind me. The support helped us cope, and draw a lot of strength during what was a horrible nightmare. We felt very nurtured during that time because of all of this.”

She has also forged a lifelong friendship with Julie Genova, the Bostonian nurse who provided CPR to her son when he initially fell.

On the final night of her trip to Ireland with husband David, Julie met with Martina at her hotel in Temple Bar, and they embraced.

Speaking exclusively to the Limerick Leader from Boston this week, Julie spoke of how she gave an unconscious Neil CPR for five minutes before he began to show signs of life.

“It was a horrible situation,” she said, “this little baby was lying there, not breathing. I gave him CPR for about four to five minutes and he started to cough and come back. He was looking at his mom, he was moving his extremities, he was moving on his own.”

Last weekend, the Shanahan family headed to Kilkee for the weekend to take a break.

It was a double celebration: the first time the family had been together since the horrific accident, plus Martina’s birthday.

Speaking before the trip, she said: “It is just going to be marvellous. I am looking to getting down by the seaside, and spending time with my little boys. And I have a night out with my sisters and husband on Saturday night, which I am really looking forward to!”

Martina’s six sisters, Geraldine, Mary, Mairead, Catherine, Brenda and Della were invaluable to the family, as were her nieces, Aoife and Caroline.

They all cared for their youngest son Billy while she and Michael relocated to Dublin for the period their son was in Temple Street.

”I was never so glad to have sisters!” she laughed, “they all have grown up children and were so happy to take Billy”

She also paid tribute to Linda O’Leary, a support worker with Enable Ireland who provided care for her eldest child Mairtin during this time.

“To have someone at the end of a phone that I could ring. Mairtin’s care is a priority for us, and I need to ensure he is getting the right care. Linda was the obvious choice. I just knew when I rang Linda, he was going to be looked after,” she said.

To show her gratitude to the care provided to her son by medics at Temple Street Children’s Hospital, Martina will organise a street party around the time of Halloween to raise money for the facility. Already her neighbours at Moveen Park, where they stayed at the weekend have raised €800 for the hospital.

Until then, both Michael and Martina are going to enjoy some much needed private time with their three little children.