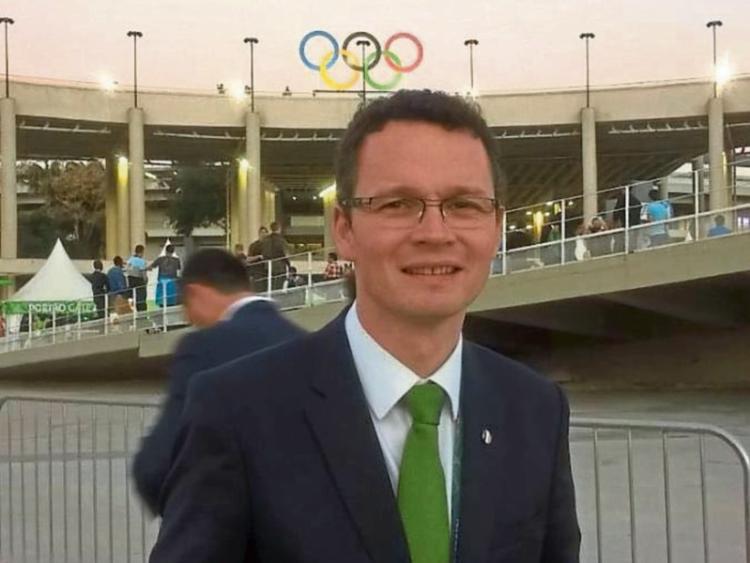 A DEEP sense of pride at having had the honour of representing the Irish government  at Rio 2016 is the over-riding memory for Minister of State for Sport Patrick O’Donovan, now back at home in West Limerick.

“It was a very special experience,” he told the Limerick Leader this week.

But his visit was overshadowed to some extent by boxer Michael O’Reilly’s failed drug test and the continuing scandal over alleged ticket fraud, which emerged after the Minister arrived in Rio.

“I said from the start the best thing to do was to allow the Brazilian investigation to go on  and then for the Joint Oireachtas Committee on Transport, Tourism and Sport to conduct a review as they had done after the London games. “

“​If my suggestion from day one was agreed we could have avoided an awful  lot of what has happened,” he said.

“What I do want to see is that whatever investigation has to be seen to be fair independent, impartial… and the public must be satisfied that the proper questions are being asked.

“I have also said from the start we can’t compel the Olympic Council of Ireland to have an independent person in their investigation,” he said. But he believed it would be in their best interests had they agreed to this. And he felt that any commercial sensitivity that might be involved could be dealt with.

He welcomed the fact that the Fine Gael TD Brendan Griffin, who is chairman of the Joint Oireachtas Committee was now convening a meeting “to scope out what they can do and what they can’t do and the sooner that happens the better.”

“I don’t think it is helping that every day there is a new group being suggested to carry out an investigation. This is a serious issue. It deserves to be treated seriously.”

The Minister revealed that he knew people who had had difficulty in securing tickets and who had to get help from people to do so. “Regardless of whether it is the Olympics or the West Final, people who are genuine supporters should not have to go through that ordeal,” he said.

On the issue of Michael O’Reilly’s failed drug test, Minister O’Donovan said: “He did the right thing by owning up.”

However, he did not believe O’Reilly’s failed test did reputational damage to Ireland. If anything, he argued, it demonstrated the strength of the testing regime we have in place here.

But he pointed out that ever before Rio he, as a minister,  he had signed up to a very strong and unambiguous statement of zero tolerance for substance taking and doping. And he had backed the position outlined by the Danish Sports Minister and now supported by 18 European countries.

“John Treacy (Sports Ireland) and I had agreed that after the games, we would work with other EU and European countries with a view to building a common position on anti-doping. Because if the Olympic Games are to mean anything into the future, it has to be a place for clean athletes.”

While in  Rio, he had begun building on that, he explained, and had held talks with ministers from various governments.He had also agreed to work jointly with his Danish counterpart to co-foster it and drive it through the EU council of sports ministers.

During his Rio visit, Minister O’Donovan met many of Ireland’s Olympians and their families. “I was with Fiona Doyle’s family for her heats,” he explained. . And while he acknowledged the disappointment felt by the young Dooradoyle woman, he was adamant she had achieved something very special.

“There are very few people from Co Limerick or even all of Ireland who can call themselves Olympians. She has something now that nobody can ever take away from her.”

“I know there was disappointment in terms of how many medals we won or didn’t win,” he continued. “But these are young people who have great careers ahead of them.”

Minister O’Donovan will return to Rio next month for the Paralympics and is looking forward to it.

Describing his recent visit he enthused: “From the moment I arrived up til the time I left, there was a huge welcome there for me from the local people involved in the organisation. And there was a kind of surreal experience to find yourself  in a situation where you are representing your government and your country.”

Dating his first memories of the Olympics back to Los Angeles in 1984, when John Treacy won a silver for Ireland, he added: “I would never have thought that, a, I would be going to the Olympics and b, representing the government there.”

Instead, he has now found himself working closely with John Treacy now head of Sports Ireland.

But Minister O’Donovan found “disturbing” a massive screen, erected along miles of the road from the airport and  intended to block out a shanty town from view.

“ It is disturbing that a decision was taken to erect one of these so that people like myself and others weren’t going to have these views,” he said. But, he added, they  couldn’t block out the smell.