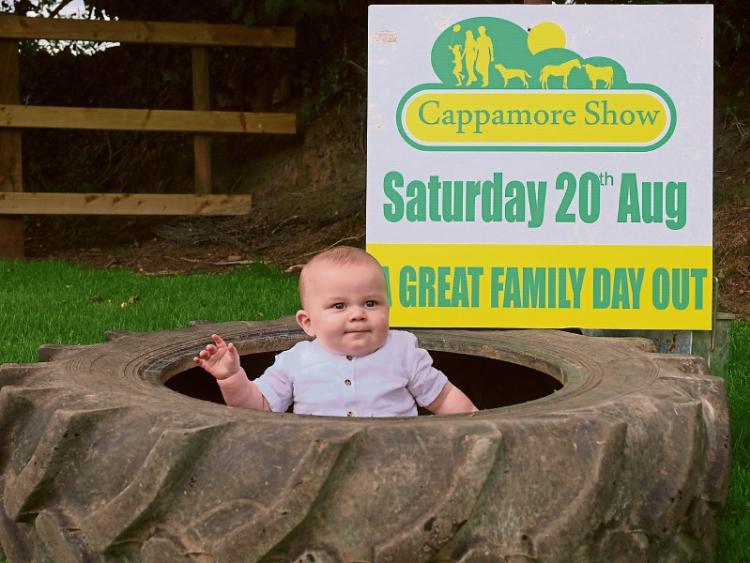 SEVEN-month-old Ollie O'Brien, pictured, is looking forward to his very first Cappamore Show this Saturday, August 20, but in contrast it will be the first one that Paddy Ryan “Luke” has ever missed.

Mr Ryan was at the very first show and has been secretary for the last 56 years. The reason he can’t be in Portnard is that his sister – Sr Mary Anthony, of the Columban Sisters is celebrating her golden jubilee in County Wicklow.

“It is definitely the first Cappamore Show I have missed. I was at the first one in 1954,” said Mr Ryan.

The event is so close to his heart that he gave it “long and hard thought”.

“I will be at the show in spirit but I wanted to support my sister on her day. I’ve known about the dates clashing for the last couple of months. In the last fortnight I gave it serious consideration before I made up my mind. There will be more shows and this is a once-off,” said Mr Ryan.

But the show must go on and Mr Ryan says they are lucky that they have an abundance of committee members and stewards.

As some agricultural shows around the country are struggling for volunteers Cappamore Show has a record number on their committee.

Marie Hayes, chairperson, said they currently have 141 men and women putting their shoulders to the wheel or make that 142 if you include Ollie and his tyre!

The son of Bríd Walsh and David O'Brien, Lower Bilboa, is certainly a candidate for the bonny baby competition. His grandparents, Joe and Nuala Walsh, along with his two aunts, Marian and Noelle are all committee members.

Maura Walsh, PRO, said there will be something to peak the interest of everybody who comes to Portnard.

All the ingredients for a great show.

- Limerick Leader archivist Grainne Keays and editor Eugene Phelan will be at this year's Cappamore Show. Come along and meet them and relive some great memories from previous shows and local events, with hundreds of old photos on sale on the day