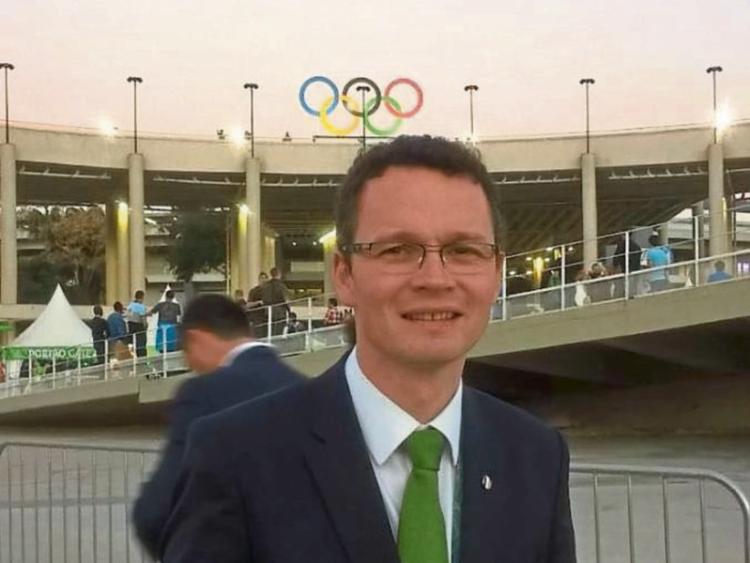 Minister of State Patrick O'Donovan outside the Olympic Stadium in Rio

FOLLOWING the arrest of Pat Hickey, president of the Olympic Council of Ireland this Wednesday, Minister of State for Sport, Patrick O’Donovan is once more at the centre of demands for a full investigation into alleged Irish Olympic ticket fraud.

“The situation is evolving by the hour,” he told the Limerick Leader this Wednesday evening, adding that he would be having further discussions overnight with Sports Minister Shane Ross and with his department officials.

“I don’t want to prejudice any possible case being taken by the Brazilian authorities,” he continued.

However, he added: “There are still questions to be answered and I am very anxious to have the answers and as quickly as possible.”

In an interview with the Limerick Leader prior to Mr Hickey’s arrest, Minister O’Donovan defended his belief that Brazil should conduct its own investigation and that the Joint Oireachtas Committee for Transport, Sport and Tourism was the best vehicle to get to the bottom of the controversy in a fair and impartial way.

In statement, sports minister Shane Ross said that he had "learned from our Ambassador here in Brazil that a second Irish citizen has been arrested in connection with the Brazilian authorities’ investigation into alleged ticket touting.

"I understand that person has accepted consular assistance and our Consul General is engaging with him.

"Given the seriousness of this matter, and in the interests of taking swift and decisive action, I will be returning to Dublin as quickly as possible. I will immediately consult with my officials, with Minister of State Patrick O’Donovan, and with the Attorney General with a view to considering the options open to the Government and decide the best course of action.”

The minister had held meetings concerning the investigation by the Brazilian authorities into alleged ticket touting in recent days following the arrest of Kevin Mallon who had a number of tickets in his possession that were earmarked for the Olympic Council of Ireland.

- For more, see the print editions of the Limerick Leader broadsheet, in shops this Thursday morning