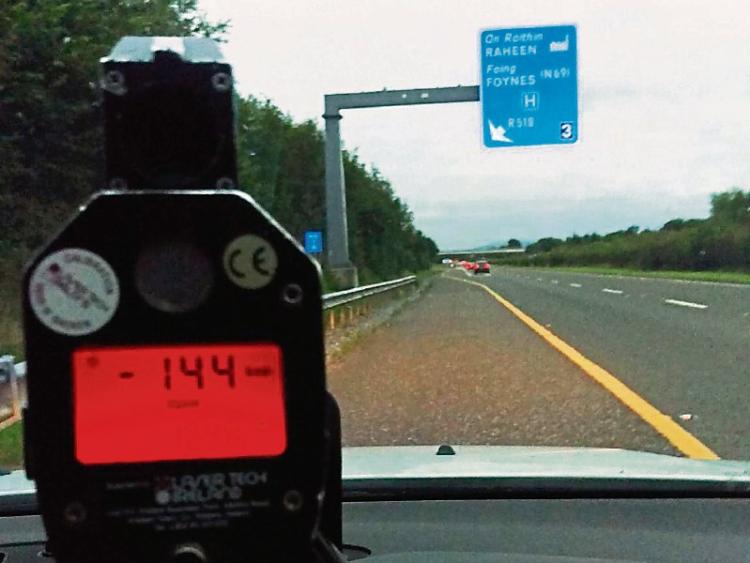 THE head of the divisional traffic corps is appealing to drivers to slow down after it emerged several motorists were caught driving at speed on the M20 at the weekend.

In one incident a vehicle was clocked traveling at 144kph (24kph above the limit) near exit 3 on the inbound lane of the motorway.

“One of 3 motorists detected exceeding 140kph during traffic op on major routes around Limerick” read a tweet which was posted on the official Garda Twitter account (@GardaTraffic).

It is expected Fixed Charge Penalty Notices will be issued in relation to each of the detections and that prosecutions will follow if the fines are not paid within the appropriate timeframe.

Inspector Paul Reidy, who is based at Henry Street garda station, confirmed the detections were made by members of the divisional traffic corps who were deployed on the motorway as part of Operation TISPOL - an EU-wide road safety initiative.

He says motorists driving at excessive and sometimes dangerous speeds remain one of the main concerns of gardai.

“We have had an increase in road fatalities in Limerick so far this year and our priority is to ensure that we reduce the number of fatalities and serious injury collisions,” he said adding that the detections on the M20 at the weekend show gardai are enforcing the road traffic laws on all roads across the city and county.

“We are trying to be as visible as possible and we are out on motorways, regional roads and secondary roads,” he said inisisting that gardai are specifically targeting “accident-prone areas” in an effort to prevent collisions.

Appealing to drivers of all ages to slow down, Insp Reidy said a reduction in speed of just 5kph can have a significant impact in reducing the chance of serious injuries being sustained in the event of a collision happening.

Meanwhile, the number of people using mobile phones while driving is also a concern for gardai despite a major advertising campaign.

“It is still a severe problem, people are just not listening (to road safety experts),” said Insp Reidy who added that the number of people who continue to drive while not wearing a seatbelt is also a major concern for the authorities.

He said new figures from the RSA show a considerable number of people who have been injured in road collisions so far in 2016 were not wearing seatbelts at the time.