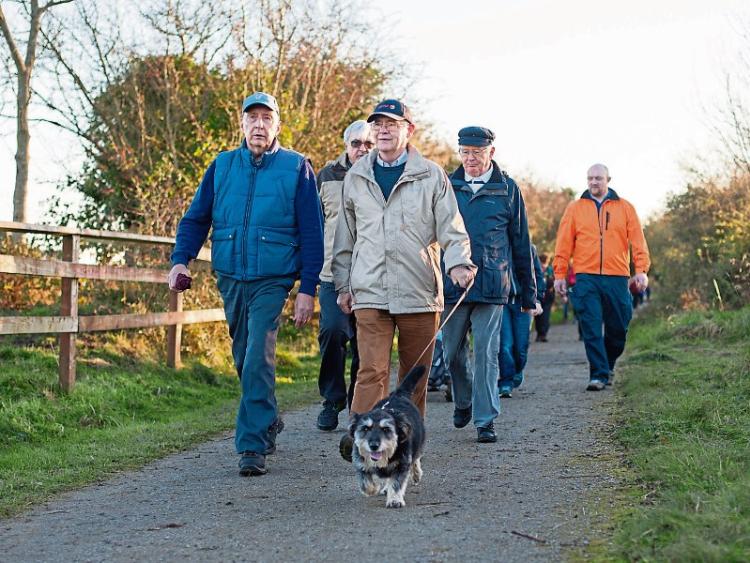 Stepping it out last November to mark 25 years of the Great Southern Trail, which is now set to get €1m in new funding

FIVE projects in West Limerick, including the proposed athletics track in Newcastle West and the Great Southern Trail, are set to benefit from a windfall of €1.75m.

The funding has become available as a result of regeneration in the city and on foot of the Hinterland Report commissioned last year by Limerick City and County Council. That report looked at the impact of regeneration on the county and recommended that infrastructure and services in the county’s towns and villages be improved.

Last week, the Minister for Housing, Planning, Community and Local Government, Simon Coveney announced funding of €1.5m for projects in the county, west and east, with matching funds to come from Limerick City and County Council. The total of €3m was warmly welcomed by Fine Gael TD Tom Neville.

The single biggest project to benefit will be the Great Southern Trail, now in the ownership of the council. A total of €1m has been allocated to upgrade and promote the trail. “This is good news,” said Liam O’Mahony, chairman of the Great Southern Trail Group which developed the trail over the past 25 years. “It shows the council’s commitment to the trail now that they are managing it. We hope the money will be wisely spent.”

The proposed athletics track in Newcastle West has been allocated €452,000. The project involves an eight-lane 400m track with changing facilities and equipment stores. A feasibility study published earlier this summer concluded there was a quantifiable need for the track, estimating that it serve nine athletics clubs in the region and would have over 6,000 potential users by 2021. The estimated cost is €1.3m but the consultants recommended that development take place in two phases, the first phase being the track itself followed by the building of changing facilities and equipment stores.

Welcoming the funding, Cllr Michael Collins FF said it would shorten the time-line for the project considerably. “This will allow land for the project to be purchased and to move on to planning and designing the new facility,” he said. “Our task now and our challenge is to put governance in place. We need to bring the design forward and we need to be ready for the next round of funding from the Sports Capital Grants.”

But Newcastle West may also benefit from €500,000 which has been earmarked for CCTV investment and maintenance. Local councillors have been lobbying for a system linked to the gardai for some time.

Meanwhile, Patrickswell is also set to benefit from the Hinterland windfall. A total of €250,000 has been earmarked for village renewal and a social cohesion project in Rathkeale will get a total of €51,000.

In the east of the county, Murroe will get a total of €500,000 for a sports facility while a pedestrian bridge in Kilmallock has been allocated €247,000.

And in further good news, towns and villages in West Limerick can expect to share in the €380,000 allocated to Limerick City and County Council under the Town and Village Renewal Scheme. Welcoming the scheme, Minister of Sport and Tourism, Patrick O’Donovan said, the council would work with local communities and local businesses to develop and implement ideas that could make “a real and lasting impact in revitalising our local rural towns and villages.” Up to 85% of the cost of each project would be covered by the scheme, he added.

“The focus of this fund for 2016 will be on small towns and villages with populations of less than 5,000, but there will be some funding available for towns with a population of between 5,000-10,000,” he said.