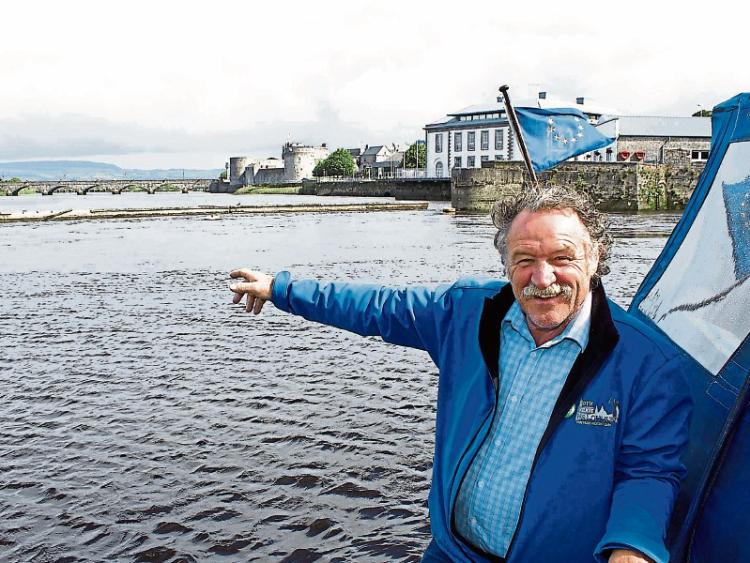 Ray O’Halloran, pictured on the Shannon, is delighted the navigation is reopening

THE Shannon river navigation through Limerick is to reopen after five months today.

It follows remedial work in the area between Parteen Weir and Sarsfield Lock. The decision to close this route was taken in March this year after safety inspections of the infrastructure.

Damage was caused by record flood levels and the prolonged duration of these floods during last winter.

As a result of this, the floating breakwater at the entrance to the Abbey River was no longer in place to protect vessels from striking the fixed weir.

The floating pontoon upstream of the railway bridge was also damaged and unsuitable for mooring to or walking upon.

The works to remediate these deficiencies included the recovery of the breakwayer, and the reinstallation of the breakwater arrest system.

Following completion of the flood damage work, operational maintenance to the sluice and lock-gates of Sarsfield Lock was also required and is now complete.

For the rest of the marine season, Sarsfield Lock is to open on Mondays and Thursdays at various times to meet the tide timetable and operation of the Ardnacrusha power station.

These times can be found by calling 090-6494232, or by visiting www.waterwaysireland.org.

Corbally boatman Ray O’Halloran has welcomed the reopening this Thursday, saying: “It is a long time coming. I am delighted to see it is happening.

“It has happened on schedule. It was a navigational hazard, and at last it has been addressed.”

He added that boats coming up the sea or down from Kilaloe will be able to travel through the Ardnacrusha gates and into the city centre.

In a statement, Waterways Ireland said it recognises the inconvenience the closure has caused users of the navigation and apologies for any difficulties experienced.