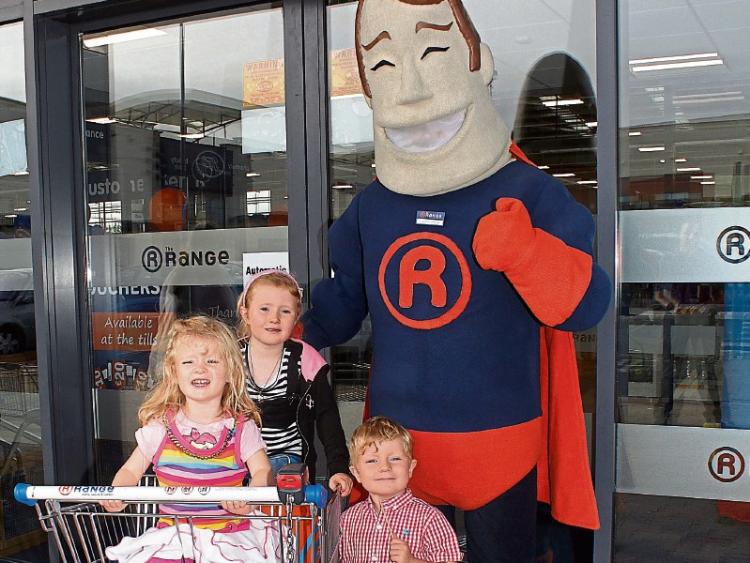 Chloe, Nathan, and Summer Tiernan with Captain Range at the opening

THE Mayor of Limerick has praised home and garden retail chain, The Range, for recruiting almost 70 employees directly from the Live Register.

Cllr Kieran O’Hanlon was speaking after he officially opened the UK-based company’s first superstore in Ireland.

The store is located in a unit which was previously occupied by Atlantic Homecare at the Childers Road Retail Park.

There was a party atmosphere – both inside and outside the store – ahead of the official opening with some people queuing overnight in the hope of securing some early bargains.

“It’s grand and spacious, it’s impressive, it’s spacious and bright and easy to navigate around,” said Pat Rainsford, Dooradoyle, who was one of the first customers through the doors.

Another early customer, Ann Bromell from Kileely, was also impressed with the new store.

“It’s beautiful, absolutely beautiful,” she said adding that prior to it’s arrival in Limerick, she had not heard of the retail chain.

After performing the official opening, Cllr O’Hanlon said he hopes the new store does well.

“I’m so happy, particularly for the staff who are here, because they were all unemployed and it’s great that a company like this will go to the Live Register,” he said adding that the opening of the new super store represents a major boost for Limerick and the local economy.

“I am delighted the company decided to come to Limerick to open their first store in Ireland. Limerick, I suppose, is the capital of the Mid West and not alone can they (The Range) attract business locally but also people will come from County Limerick, Clare and North Tipperary,” he said.

Manager of the new store, Stephen Phillips, says the official opening of the store was the culmination of months of hard work and preparation behind the scenes.

“It’s our first store in Ireland and to have local people on board with us is absolutely fantastic. I’ve worked in Limerick my whole life and to be part of this is an honour for me and its going to do really well in Limerick,” he said.

Regional manage, Ken Fox confirmed the company, which carries a product range of more than 65,000 items has plans to open several more stores in Ireland in the coming years.