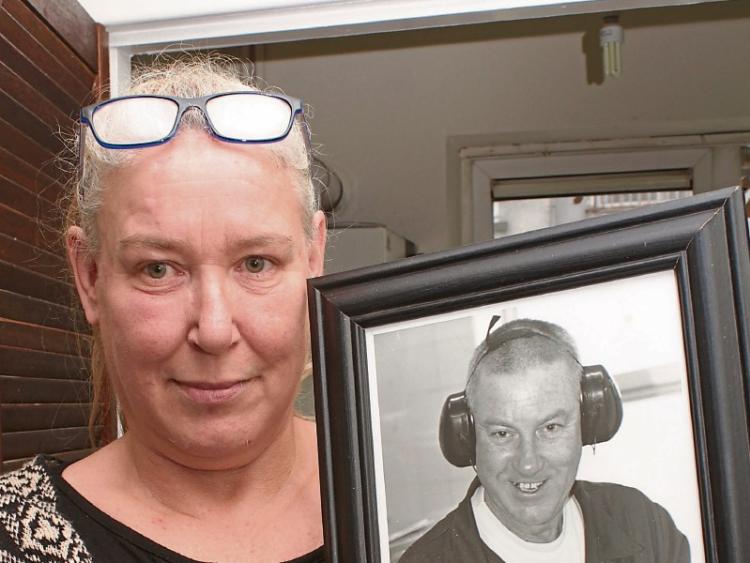 Chantal Wiernik with a photo of her late partner Maurice, who died the day they hoped to marry Picture: Michael Cowhey

A LIMERICK woman who had hoped to grant her partner's “dying wish” of marrying him after two proposals has been left “heartbroken” that he passed away just hours before they were due to become husband and wife.

Chantal Wiernik, 52, a native of Belgium, has now issued a compassionate plea to Limerick City and County Council to allow her to remain in her late partner’s home in Thomondgate to allow her to grieve.

Chantal's partner of 20 years Maurice Motson, 76, passed away on July 13 last in Milford Care Centre in Castletroy. The urn containing the ashes of the English native remains in Cross’ funeral home in city as she said she can’t bear to bring them home.

“I went to the registry office months before he died to sort out the paperwork, but there were complications and delays because he was married and divorced in England years ago, and we were waiting for all the documentation to come through.

“Finally it was all approved. But he passed away in Milford at 7.30 that morning, and I got a call two hours later to say we could marry, but it was too late.

“It was his dying wish to marry me. He was my soulmate, my everything. We were always there for each other. I didn’t know he was going to pass away so soon; I thought we would have had more time. But he got an infection recently, after being diagnosed with cancer nine months ago,” she told the Limerick Leader.

“I said no the first time [he proposed] because I don’t really believe in marriage, but I loved him so much I said ‘yes’ the second time to make him happy after he got sick. Unfortunately we didn’t get the chance, but we got to say our goodbyes, and I was with him at the last minute.”

Leaving her private rented accommodation, Chantal moved in with Maurice in his one-bedroom bungalow in Thomondgate months before he passed away to care for him, while he was cared for intermittently in Milford.

She is now paying some €62 a week to remain in that residence in Canon Breen Park in Thomondgate, but said she has been served with eviction notices and a locksmith came to the property to change the locks.

However, when he saw her tears and obvious grief, she said he refused to carry out the job for the council and left.

“I have no job, no money, nowhere to go. I’m afraid to leave the house again in case the locks are changed,” said Chantal, who is in receipt of disability allowance.

“Every day I say to myself I’ll go and get his ashes, but I just can’t bear to bring them home. I just want the council to give me six months here, or a year, or whatever they can to let me grieve a bit and be with my memories of Maurice.”

Chantal is now living in the property with her two dogs, Bob and Marley, and her two cats, Napoleon and Josephine.

She also has produced a petition signed by up to 50 local residents appealing for her to remain in the modest house. “I’m not asking for anything for free – I have always paid my way,” she said.

In addition, she produced a copy of a letter, which she claimed had been written by Maurice on July 5.

It states: “My name is Maurice Motson. I have a diagnosis of terminal, incurable, oesophageal cancer. It is my last wish to marry my long time partner Chantal Wiernik, to whom I have proposed to twice before over a 20-year period. I am of sound mind to make this decision. The doctor has also confirmed this. I hope you will grant my last wish to marry Chantal. Yours sincerely, M. Motson.”

There are now over 4,300 people on the council’s housing waiting list, and for every single one-bedroom home there are 103 applicants. Speaking recently about the huge demand for housing, Sarah Newell, executive planner with the council, said the demand will feed in to future development plans.

Limerick City and County Council said it would not be commenting on Chantal’s situation.

Ms Wiernik has been in contact with former mayors of Limerick, Kevin Kiely and John Gilligan, regarding her situation, as well as councillor Frankie Daly.

Milford Care Centre confirmed that it regularly receives requests from people to facilitate weddings or civil unions on their premises.