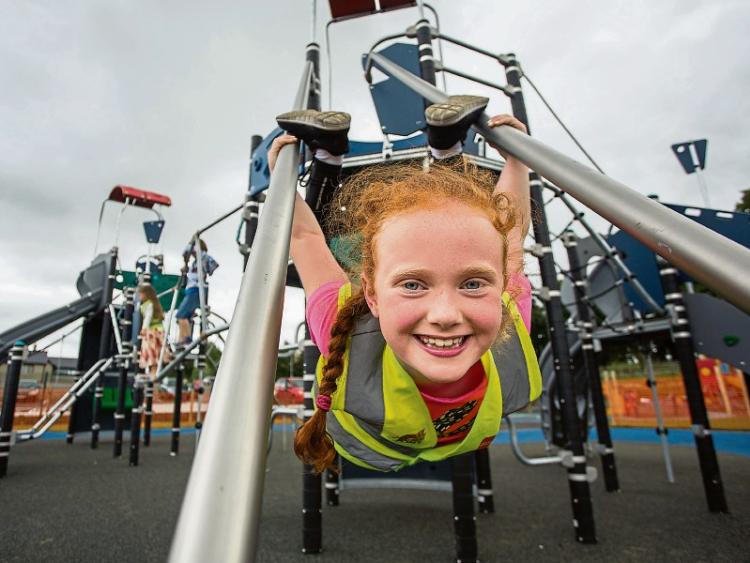 THE SUN shone brightly on the Mungret College campus on Friday morning when crowds of children filled the new park and playground, which opened to the public for the first time.

The €1.2m facility is a sea of colour and adventure, with swings, slides, see-saws, climbing ropes and bridges in every direction.

Mother Maria Maher from Foynes was extremely impressed with the park, which she described as “brilliant” and “amazing”.

“It’s our holiday tradition that we go to a different playground every week for the nine weeks of summer holidays.

“We’ve gone through a lot of them, but this is the top one so far,” she enthused.

The 3,000 sqm development also boasts a special sensory area for children with autism spectrum disorder, making it suitable for all children aged 0 to 14 years.

Commenting on this, Ms Maher said: “There’s so many kids that just can’t have access to playgrounds and even if there is a parent in a wheelchair, they can now go to the playground with their own kid.”

Another parent who was delighted with with the new development was childminder Olga Reddan from Raheen.

“It’s fabulous. This is one of the best parks we’ve seen around. We’ll definitely be coming back,” she said as the group of children laughed and played behind her.

Linda O’Brien was there with her son Harry and her daughter Kate, who was celebrating her fifth birthday.

“It’s just as enjoyable for the parents as it is for the children going around this morning. I’d love to be that age again,” smiled Ms O’Brien.

Little Kate, she said, thought that it was “the best birthday present ever”.

As well as being a play-area for both able-bodied and non-able bodied children to enjoy, the facility also has a 2km cycle/walk pathway and a number of exercise stations.

The council has said that the park and playground opening is the start of "massive plans" for Mungret. It took over the college and surrounding lands, reaching almost 200 acres, from NAMA in 2014. A number of schools are to be built on the site in the near future also.

Tara Flanagan, Senior Executive Engineer with the council said of the playground: “When we sat down to design the playground, we had the needs of less able and non able bodied children in mind. Drawing from our experiences with other council-owned playgrounds across the city and county, we knew the playgrounds were being enjoyed by everyone.

"The play equipment is suitable for both and encourages dual use by able bodied and non able bodied children, while there is a sensory area for children on the autistic spectrum.

"Limerick City and County Council worked closely with Cycle for Sick Children and Sophie’s Journey Foundation in relation to the design to get a real appreciation of the needs of non able bodied children. Kompan Ireland, who installed the playground, really captured our thinking in their equipment design,” she added.

Adult exercise equipment and benches are being provided along the perimeter of the park and landscaping will continue throughout the coming months, to make people’s walks and workouts more visually pleasing.

The official opening is expected to take place in September.