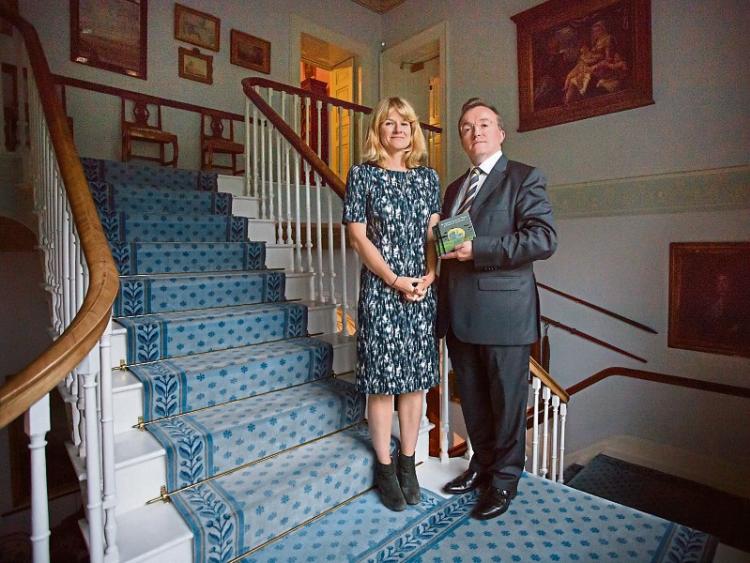 A MAGICAL journey with many stops and Limerick’s answer to the Wild Atlantic Way.

With these glowing accolades, the Mayor of Limerick City and County, Kieran O’Hanlon launched the new short but colourful guide-book which takes the reader on An Architectural Tour of County Limerick, or what could be called 'The Desmond Trail'.

But the Mayor urged readers to do more than read the snappy introductions by historian, Dr Declan Downey and admire the quirky illustrations by Nesta Fitzgerald.

“It looks great, it contains many stories,” he said. But his hope was that the pocket-sized book would pack a big punch and become an unique selling point for Limerick, as a county of castles and tower houses, of big houses and unrivalled architectural heritage.

“The beauty of this user-friendly guidebook is that it brings that list together for the first time,” he said.

Tourist trails are the hottest product in tourism, the Mayor continued.

“The genius of the Wild Atlantic Way is its simplicity. With this architectural necklace we potentially have our own Wild Atlantic Way, We have our own trail. They have given us this gift. It is up to us to make the most of it, “ he told a very crowded Glin Castle at the launch of the book.

An Architectural Tour of County Limerick is the second in the series dreamed up by Tarbert native Dr Declan Downey of UCD and Nesta Fitzgerald, from Glin who currently lives and works as an illustrator in London.

Last summer, their first book An Architectural Guide to North and West Kerry sold out within two weeks, Dr Downey revealed with some glee. And so widespread was demand that it went into a second edition for this summer’s tourist season.

And both he and fellow historian, Dr Liam Irwin are agreed that the Norman legacy, with its walled towns, castles, mottes, cathedrals, monasteries, friaries, convents, has been a rich one, particularly in Limerick and North/West Kerry where the Earls of Desmond held sway, effectively establishing a Desmond Palatinate or semi-independent entity which survived from 1329 to 1583.

“The Normans gave as much as they took,” Dr Irwin said, addressing the gathering at Glin Castle. And apart from buildings, he cited Common Law, chancery, commerce and trade, even parliament as part of the Norman legacy.

“We have in Ireland a very large and important heritage, a heritage which too often in the past and even now is ignored, diminished even repudiated,” he said. “Medieval Ireland is largely neglected and ignored and not taught to Irish children at all.”

“In this context I am welcoming the publication of this lovely book. This is a book to be read, dipped into, consulted and used. It is an absolute delight from the elegant prose of Declan Downey to the artistic talent of Nesta Fitzgerald,” Dr Irwin continued.

It is a book for everybody, he added, but one which would be of particular interest to young people.

“Nesta’s wonderful quirky illustrations, their lively sense of fun and humour, would draw in children and make them realise that studying Irish history could be fun,” he said.

The idea for the series emerged as a result of lots of chats between Nesta and Dr Downey.

“I have always wanted to do these little books. They are such a good size. You can take them with you, you can follow a route. Hopefully, they will trigger something in someone to take an interest in the buildings. We just want people to visit the places.”

Her hope also, is that because the selected buildings are illustrated, and not photographed, it might make people see them in a different light.

“There isn’t one person in this part of the country who doesn’t have Norman as well as Gaelic blood running through their veins,” Dr Downey pointed out.

“All these cultures and the mix of these people are important because they brought in different channels of culture. We see that in the wonderful legacy they have left us in the buildings as well as in our literature, our poetry, our songs our music and sporting activity,” he said.

And he stressed that this would never have happened if Ireland had been isolationist. Instead, we have had very strong links with Europe.

“County Limerick is one of the most unique regions in Ireland in terms of its wealth and density of medieval buildings and their associated history, legends and folklore,” Dr Downey emphasised.

And he pointed out that the book takes a “small but significant” selection of examples ranging from the solitary drama of Shanid Motte and Bailey to “the collective magnificence of the county’s ancient corporate towns of Askeaton and Kilmallock.”

The book is set out, as a tour, beginning with Lough Gur and taking the reader and visitor, step by step and page by page, through Kilmallock, Adare, Newcastle West, Shanagolden, Glin, Foynes and Askeaton. Each selected building gets its own pared-down history and a taster of folklore while the drawing accompanying it knits the two together beautifully.

The Desmond castles in Adare, Askeaton and Newcastle West get a look, along with the friaries in Adare, Kilmallock and Askeaton. But the post-Desmond period, from 1750 to 1900, is also covered. This was a time, Dr Downey explained, when the Fitzgeralds, Wyndham Quins, Southwells, Courtenays, O’Briens and Perys “renewed the regions’ tradition of grand edification” with neo-medievalist themes, such as at Adare Manor, Dromore Castle, Glin Castle and Cahermoyle.

“I am merely carrying on in the tradition of my father in noticing and appreciating the extraording castles, tower houses and religious houses that we live among here in North Kerry and Limerick,” Nesta Fitzgerald said.

The first book in the series was dedicated to her father, the late Desmond Fitzgerald, Knight of Glin while the second book is dedicated to William Westropp, from Patrickswell who researched, wrote up, drew and archived the national monuments of Limerick and Clare in particular.

A third book, about the cultural heritage of Limerick city and its environs is expected next year and hopefully, Ms Fitzgerald said, they will then embark on a book on Clare.

An Architectural Tour of County Limerick is available at local bookshops and at the Foynes Flying Boat and Maritime Museum. It costs €12.