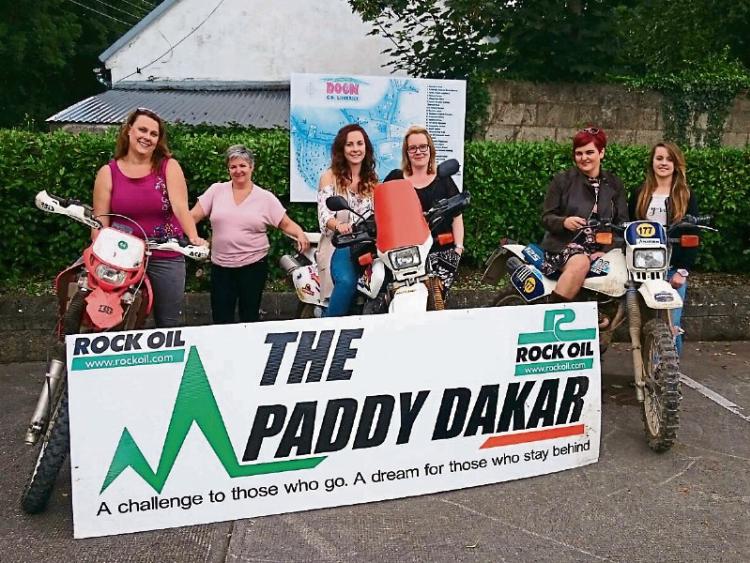 ORGANISERS of the brilliantly named Paddy Dakar Rally in Doon are getting into top gear as they launched the event which takes place on September 23 and 24.

It is an unusual on and off-road ,adventure motorcycle orienteering event which has been held in Doon for the last seven years. It has grown from 20 riders to over 200. All proceeds after expenses go to local causes.

“It has grown to a stage where no one person could possibly do all the work related to the event and now a team of dedicated volunteers has formed to develop and improve the event further.

“Everyone is delighted about the response locally and especially by the enthusiasm and ability of the new volunteers who have emerged’ said Richie Hayes, committee member.

Lisa said: “We are only scratching the surface of this yet and we’ve had Ballyhoura looking at the potential growth and expansion outside of that one week. Without something ‘themed’ like this it would be hard to attract visitors to Doon". We’d like to make more people aware that it's a  really family friendly experience.”

They started the junior Dakar – children's bicycle trail - in 2014 and it proved a big hit. All the boys and girls need is a sturdy bike and protective gear. “There are definitely other potential off-shoots and we'd welcome all suggestions’,” said Ann Marie Richardson.

Steven Byrnes said their event is a take on the famous Dakar Rally from Paris to Senegal. They now have riders from the Dakar Rally coming to Doon as word spreads.

“Nicolas Boyer, three Dakar finishes,  came to Doon solo from France last year but is returning this year with several friends. The main days of competition are Friday and Saturday, September 23 and 24, and then there's the Irish Rovers 10th year anniversary Doon Vintage Rally on Sunday, September 25,” said Stephen. See www.thepaddydaker.ie for more.