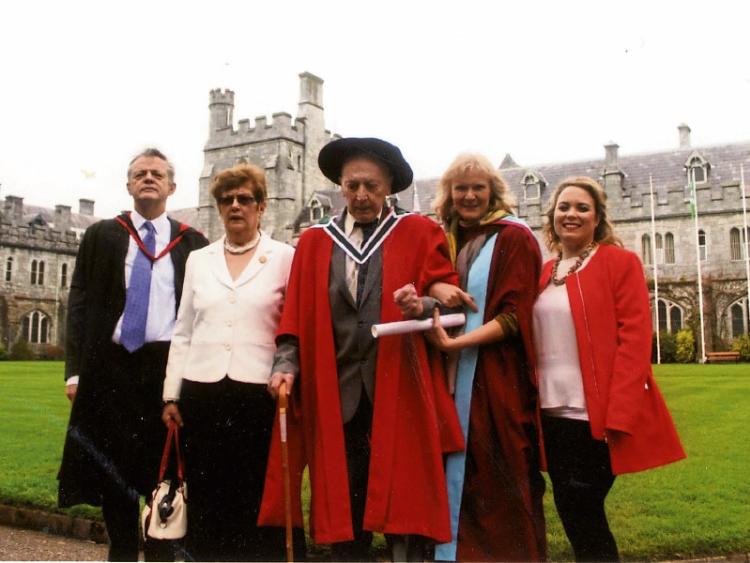 PAT Aylward has a lesson for all of us - age doesn’t matter.

The 83-year-old recently became one of, if not the oldest, people in the country to complete a PhD.

But not only that - he finished his thesis despite falling from a ladder, being rushed to hospital with an abdominal aneurysm and undergoing an operation to remove a growth from a kidney.

When Pat came around from the operation on his aneurysm in University Hospital Limerick, Professor Stewart Walsh asked him did he have any questions.

“I replied that, ‘I am studying for a PhD and am I wise to continue?’. Professor Walsh said, ‘I thought you would be asking me what did I do up in the theatre’,” said Pat, with a wry smile as he hands over the fruits of his labour.

The hardback bound Echoes of existentialism in the works of Carlos Fuentes - a Mexican novelist and essayist. All in Spanish, it runs to over 70,000 words.

While Pat’s name is on the PhD in Humanities from UCC he wouldn’t have been able to complete it without the help of wife Phil, who did all the bibliography and supported him every step of the way.

A corner of their living room in Corbally is full of books from the floor to the ceiling and that is the tip of the iceberg.

Born in Dromcollogher, Pat completed his H Dip and Masters in Education in UCC after leaving school. He taught Spanish in Coláiste an Spioraid Naoimh in Bishopstown, Cork, and also coached Jimmy Barry Murphy.

Pat swapped the south of Ireland for the West Indies for 10 years before returning to his home county and starting in St Munchin’s College in 1973.

It was to be his last job as he taught legions of boys French and other subjects until his retirement in 1998.

“I have very happy memories of my time in St Munchin’s. They completely revamped it since I left, it is a fabulous school, said Pat.

Once his teaching career ended he had more time for painting, crafting bog oak ornaments, his 40 year association with St Vincent de Paul, and politics, as a long standing active member of Fine Gael.

But at the back of his mind was a PhD.

“Something would come up, take over, like painting and I would drop it. I took it up seriously four years ago, about June 2012. I wrote a letter to Professor Nuala Finnegan in UCC and she said come in and have a meeting.

“I thought she would say go home, put your feet up and watch television but it was the opposite - she was very encouraging.

“I would go up to UCC every five weeks, get the work, then come back to study,” said Pat.

Phil said it was like work - he would have his breakfast, go into the dining room and study.

“It was like a hobby for me. There would be nothing on television so I would go in and do some study,” said Pat, who adds that it proves age is only a number.

Professor Finnegan said Pat was an inspiration to “all of us in the Department of Spanish, Portuguese and Latin American Studies and his graduation was a particularly proud moment for me”.

“I have overseen many PhDs to completion but this was very special. He was unable to attend the formal ceremony [due to illness] but President Michael Murphy extended special congratulations to him and his family.

“During our supervision sessions, we used to talk about progress on the PhD in terms of the Cork to Limerick road and Pat would often ask me if he was in Buttevant yet?

“It was a great way of trying to see our way through the process which was, at times, very arduous and challenging. We were delighted when Pat made it through Buttevant, Charleville, Mallow and all the way to Cork,” said Professor Finnegan.

She tried to find out if Pat was the oldest Irish person to complete a PhD but was told that UCC doesn't keep records about the age of its graduates.

“But President Murphy certainly reckoned that he was one of the oldest ever,” said Ms Finnegan.  Making his feat even more remarkable was that his studies coincided with ill health.

In the first year Pat fell from a ladder and was laid up for months. He kept studying.

In the second year he was rushed to University Hospital Limerick with an abdominal aneurism. Between the operation and convalescing he was out of action for six months.

Then in the third year he had an operation to remove a growth from his remaining kidney. Another four months were spent in University Hospital Limerick and St Camillus.

But through it all Pat and Phil kept looking forward. They have nothing but praise for the care he got in University Hospital Limerick from Dr Subhasis Giri: Dr Liam Casserly, Professor Declan Lyons and all the doctors and nurses who helped him on the road to recovery.

“I can’t say enough about the staff in University Hospital. They were like UCC - they couldn’t do enough for me,” said Pat. For example, a student, Nadia Albaladejo, was assigned to help with typing and some research for a year.

When he got the phone call from Dr Finnegan that the external examiner had awarded him a PhD he thought she was “joking”.

As he couldn’t attend the conferring they organised a special one earlier this year in UCC. A modest man by nature, Pat isn’t one to blow his own trumpet.

“I’m happy to have it done and to show age doesn’t matter,” said Pat.