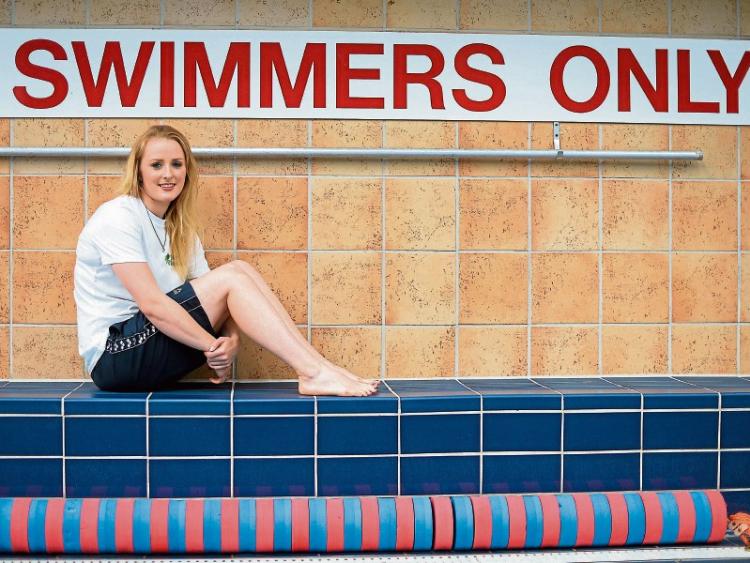 Fiona Doyle will take to the pool in Rio this weekend [picture: Sportsfile]

‘ALL the ups and downs have been worth it.’

Those were the words of not one, but two women, who are finally seeing their dreams of reaching the Olympics in Rio de Janeiro being realised.

This coming Sunday, all eyes will be on 24-year-old swimmer Fiona Doyle, from Raheen, as she steps onto the blocks for her first swim of the event.

“Dreams do come true. Twelve years ago I sat on front of the TV and vowed that I would go to the Olympics. There have been a lot of ups and downs on my journey,” said Fiona.

“Many, many tears spilled, but also many laughs had. I am so grateful to everyone that has supported me on this journey.”

The whole of Limerick is behind her, said the Mayor of Limerick, Kieran O’Hanlon this week, as well as rower Sinead Lynch (nee Jennings), 39, who has by now been adopted by Limerick from her native Donegal.

Sinead, who spoke to the Leader from Amsterdam as she made her way to Brazil, was also feeling a certain degree of satisfaction that she was now going to where she’s meant to be.

“There have been so many ups and downs but it has certainly all been worth it. It makes everything worthwhile - I can hardly express my excitement,” she said.

“On behalf of the people of Limerick, I want to wish Fiona every success in the games. She has trained very hard and consistently for years and now her dream is coming true,” said the Mayor of Limerick city and county.

Fiona will be competing in the women’s 100m and 200m breaststroke competitions and she “can be guaranteed that the whole of Limerick will be supporting her,” he said.

Fiona has been to the semi-finals of the World Championships twice, won silver and bronze at the World University Games, and for the past 12 years has devoted her life to the sport, undergoing grueling training regimes just to put her where she is today.

“She has shown her great determination and drive for many years now, when she used to get a 4.30am every morning to go training before school in Crescent College Comprehensive and all her hard work and sacrifice is now paying off,” he said.

“I know the parish of Mungret, Raheen and Crecora have been supporting Fiona for years and have presented her with a beautiful engraved Dalvey Alarm Clock prior to her departure for Brazil,” said Mayor O’Hanlon.

He also noted that many of the competing athletes have strong links to Limerick, having trained in the county’s “internationally recognised sporting facilities”.

Rower Sinead Lynch (nee Jennings), a 39-year-old doctor and mother of three, will also be competing.

In 2000 she won bronze in the world championship lightweight singles – following that with gold a year later.

She returned to training in June 2014, three days after Hannah, her third child, was born, and qualified for Rio in September last.

She is married to Limerick's Sam Lynch, also a doctor and sportsman of renown, having rowed for Ireland at the 1996 and 2004 Olympics.

“I suppose after missing out on the London Olympics in 2012, I thought the dream was over,” she stated.

“At the same time, I was still training, and I suppose it was always in the back of my mind. But I just had to prioritise other things: family and my medical career. But Sam has always been very supportive. He actually never gave up the dream for me, when at times maybe I did,” said the Letterkenny native, who lives on the North Circular Road.

Meanwhile, acclaimed Limerick physical therapist Gerard Hartmann, who has worked with British and Irish teams at every Olympics since 1992, is not going to Rio.

Speaking on the Marian Finucane show on RTE Radio One at the weekend, he said he too once dreamed of being a competitor in the Olympics Games, but has been to six Olympic Games “working with some extraordinary athletes”.

His decision not to go to Rio was ultimately based on the decision by the International Olympic Committee (IOC), which decries the use of performing enhancing drugs, against imposing an outright ban on Russia, despite the evidence regarding their scale of systematic doping. See sport for more

Hartmann said this “undermines the principles of clean sport”.