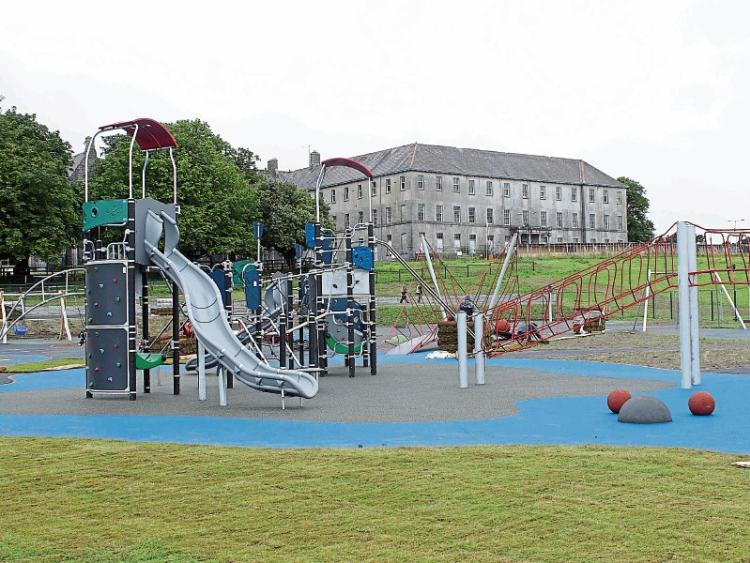 THE LONG-awaited €1.2m park and playground on the Mungret College campus will be made open to the public this week.

Following a lengthy campaign by Limerick City and County Council and the former Limerick County Council, the new community facility will open to the public this Friday afternoon.

The 29-acre facility comprises a 3,000sqm playground with 50% of leisure equipment suitable for all children, aged 0 to 14; a special sensory area for children with autism spectrum disorder; a 2km cycle/walk pathway, with associated exercise stations.

Fianna Fáil councillor James Collins welcomed the development. He said: "It's great to see an idea instigated some time ago come to fruition. This is a project that is long overdue but very welcome. It will be a superb facility for the community.”

Cllr Daniel Butler said that his late father, Richard — who was Cathaoirleach of the County Council in 2010 — campaigned for a public park to serve Mungret, Raheen and Dooradoyle.

“It’s massive news for the people of Raheen, Dooradoyle and Mungret, in particular. There is a huge young population, which is reflected in the need for additional school places, and with that, you do need other facilities like a playground and a park. It is a massive advancement and development of the community. The young families here have been waiting for this for so long.

“My own father was involved in this, going back over 10 years. He worked very hard to try and find and deliver a park. There were a number of times when he came quite close, but it never happened. I am delighted that it has finally happened. And it is important to note that this is a result of a lot of different individuals, and this is an excellent example of communities working together for a community resource.”

Welcoming the news, Labour councillor Joe Leddin said that the development is “an essential facility that has been sadly lacking for many years”.

This is part of a multi-phase master plan for the Mungret community, which will see the development of two primary schools, secondary school, a full length athletics track, a 16-acre GAA facility, commercial and social units, and a number of other projects.

This Friday’s opening will be an informal launch for the public, as works are not fully finished, according to council officials. The official launch for the new facility will take place, sometime in September.

The lands were purchased from NAMA, funded by a loan sanctioned by councillors.

The park received significant funding from the council, with additional funds raised by Sophie’s Journey Foundation and Cycle4Sick Children.