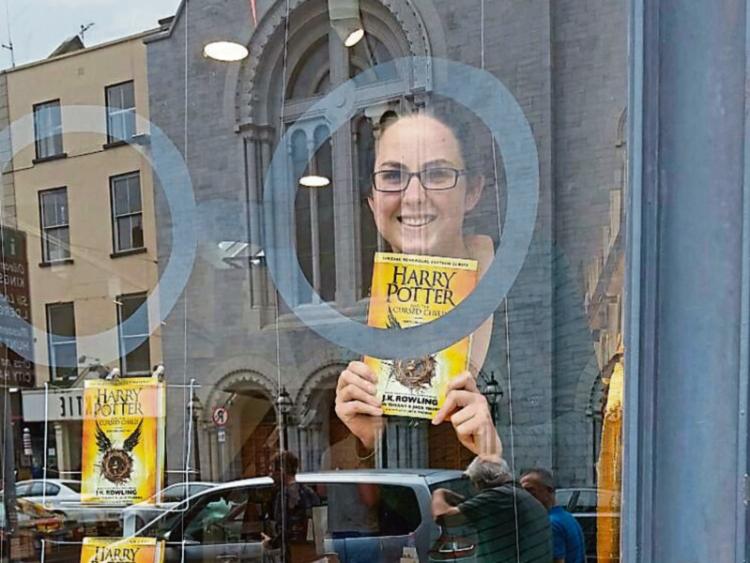 Grainne O’Brien, who works in O’Mahony’s booksellers with a copy of Harry Potter and the Cursed Child

O’MAHONY’S booksellers in Limerick have completely sold out of the latest instalment to the Harry Potter series and are plotting how they can keep the best-seller restocked on shelves until Christmas, writes Anne Sheridan.

Hundreds of copies have already sold in the space of a few days, and thousands more are due to arrive.

The O’Connell Street sellers flung open their doors on Sunday last to queues, and were sold out within hours. After restocking their shelves this Monday after receiving the new batch, they again are waiting to receive a new order to satisfy a steady flow of customers.

Harry Potter and the Cursed Child is a two-part West End stage play written by Jack Thorne based on an original new story by Thorne, J.K. Rowling and John Tiffany.

The rehearsal script, not a novelisation of the play, was released last weekend and became the eighth story set in the Harry Potter universe.

The story is set nineteen years after the events of Harry Potter and the Deathly Hallows and follows Harry Potter, now a Ministry of Magic employee, and his younger son Albus Severus Potter.

Grainne O’Brien, who works in the store, is herself a huge Harry Potter fan, and even organised a conference in the University of Limerick in 2012 dedicated to the cultural impact of the Harry Potter phenomenon, entitled Magic is Might.

“It was a crazy, crazy, brilliant day. I went to see the play a few weeks ago and it was spectacular. I had never seen anything like it. It’s amazing. It’s wrong to say that it’s another book – it’s not, it’s a totally different thing. All the staff here are big Harry Potter fans, have all read it and loved it. I was 13 when I queued up for the first book myself,” she said.

“It’s not a book, it’s a script of this wonderful play, but it’s very obvious she [J.K. Rowling] didn’t write it. It’s a totally different animal,” she told the Limerick Leader.

It was not just kids or teenagers who clamoured to get their hands on the latest installment, but many people aged in their 20s and 30s, she said, who have grown up with the books and the films.