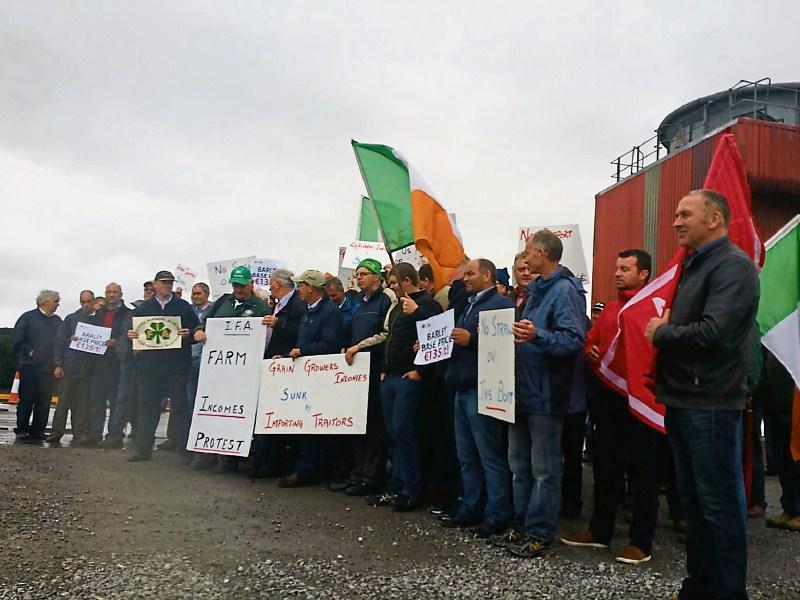 Farmers have been staging a protest at Foynes Port [Picture: Twitter/@IFAmedia]

OVER 100 grain farmers, including some from Co Limerick, have been staging a protest at Foynes Port since 8am this morning.

And so far, they have succeeded in stopping work on unloading a shipload of barley, believed to have come from France.

However, the protestors have allowed the unloading of a shipment of wheat to continue. “We are not self-sufficient in wheat,” the deputy president of the IFA, Richard Kennedy said, speaking from Foynes Port.

According to Mr Kennedy, grain farmers from around the country are extremely angry at the importation of barley by a number of importers and compounders, especially as there are still Irish barley stocks left over from last year’s harvest.  “We are self-sufficient in barley and the quality of Irish barley is very high,” he said.

They want to highlight the fact that grain-farmers are facing an income crisis, Mr Kennedy stressed. This year, he said, grain farmers are looking for €135 a tonne for barley but this is not what they are likely to be offered.

“It is only the efficiency of farmers which has kept them in business,” Mr Kennedy continued. . “But they can’t continue that way. It has to stop. It is time the imports stopped. “

He stressed that not all the compounders, i.e. the manufacturers of animal rations, use imported grain. “Some of the compounders use native barley,” he said. “We are trying to highlight the importance of keeping the grain farmers in business.”

IFA National Grain Committee Chairman Liam Dunne said, “Brokers are up to their old tricks of importing grain ahead of the main harvest. They typically use the threat of imports to undermine local prices in an effort to gain market share and boost their own earnings.