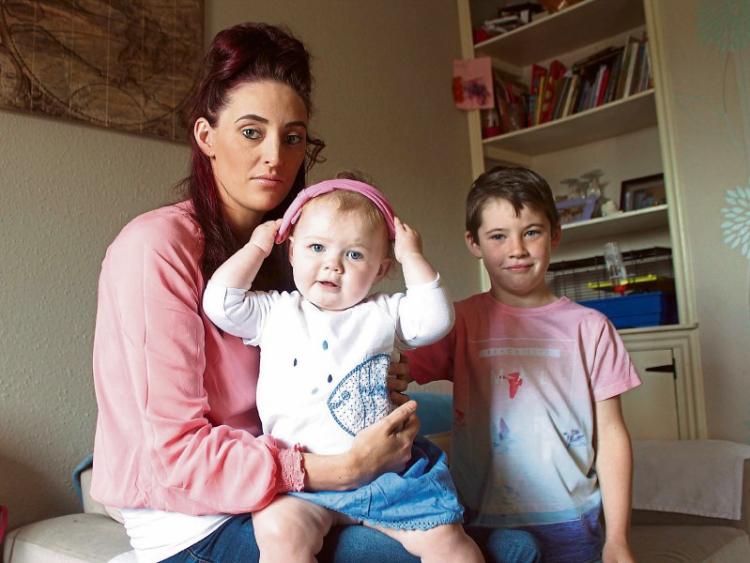 Cally Ryan said it has been a nightmare for her, Leon and Harper as they have to move between family and friends’ houses Picture: Michael Cowhey

A MUM of two children said she has been forced to live out of the boot of a car as she is homeless.

Cally Ryan, aged 30, from Cappamore, claims she first applied to the then Limerick County Council housing list eight years ago when she had her son Leon. In the intervening years she has been working in Murroe and was able to pay for rented accommodation.

However, she wasn’t able to return to work after having her second child Harper 11 months ago, on medical grounds.

“Everything went pear-shaped then as I couldn’t afford to pay for my accommodation when I wasn’t working. The man I was renting from wasn’t eligible for Housing Assistance Payment,” said Cally.

This year has been a “nightmare” for her and her two children, she says.

“It’s been all over the place. I was living out of the boot of a car for a while – just going from house to house to stay with family and friends. It’s a nightmare for all of us and not easy on the children,” said Cally.

“I was speaking to a person in the council and she said I was a new applicant but I am on the housing list since I had my son eight years ago.

“She hasn’t got one offer whatsoever in eight years and they have been giving out houses. At the minute she would take anything –  a derelict house in the middle of nowhere, she would take it.

“At the moment she is going between my house and two or three friends’ houses. All the houses are full.

“She was living out of the boot of a car for a while with her clothes in it. She has clothes in all the houses. It is crazy. She is at her wits’ end,” said Helena.

Helena said her daughter is “homeless” and has been for months.

“My house is full so she just keeps going from house to house. She was working before she was pregnant but she can’t go back to work now. She needs somewhere in Cappamore as that is where Leon goes to school [Scoil Chaitriona]. He loves it there.

“We coudn’t think of anywhere else to go for help. That’s why we came to the Leader. Hopefully it will help her get a place of her own,” said Helena.

The Limerick Leader sent a query to Limerick City and County Council about Cally’s current situation.

A spokesperson said at the end of June there were 4,336 applicants on the housing waiting list in Limerick city and county.

“The circumstances of all applicants are reviewed on a regular basis by council officials, to assess the most up-to-date needs of those on the housing waiting list.