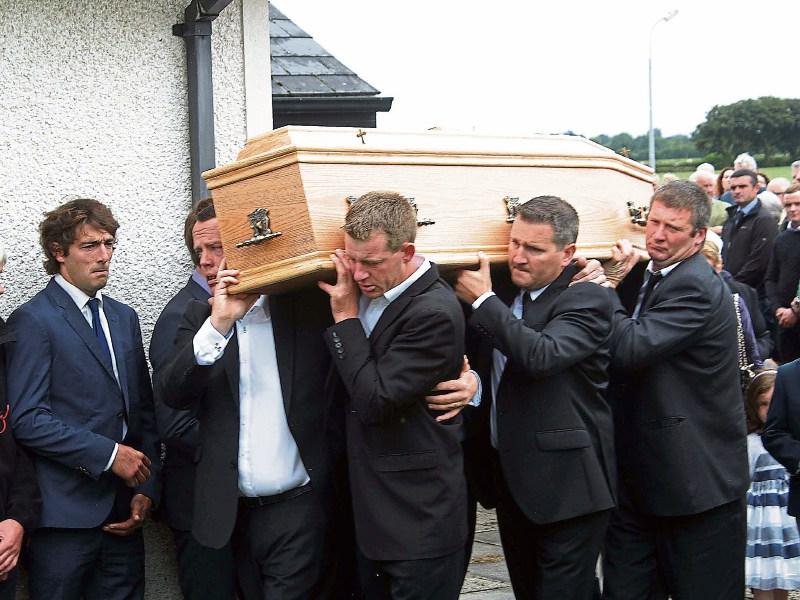 The coffin of the late JT McNamara is carried from St Michael's Church in Manister PICTURE: MICHAEL COWHEY

JOCKEYS from across Ireland and Britain stood silent, shoulder to shoulder, outside St Michael’s Church in Manister this Friday morning, as the coffin of their brother in racing, JT McNamara, was carried to his final place of rest.

AP McCoy, Ruby Walsh, Barry Geraghty, Davy Russell and Nina Carberry were among thousands of mourners who paid their respect to the  renowned jockey who passed away earlier this week.

JT was left paralysed following a fall at Cheltenham three years ago and had suffered ill health since, with frequent admissions to hospital.

He passed away at his home in Croom in the early hours of last Tuesday.

At the start of the funeral Mass which was celebrated by Canon Garry Bluett, JT’s two sons, Dylan and Harry walked forward to their father’s coffin on which they placed his red and white riding hat and whip.

Canon Bluett described JT as “a hero to many people”.

“John certainly made use of his gifts and the life that God gave him. His life revolved around his family and racing,” said Canon Bluett.

“ Racing was his passion and the tributes paid to him in the last few days bear testimony to the respect in which he was held by all in the racing fraternity.

“Strong willed and determined, he had a great command of some words in the English language - some might not be found in the Oxford dictionary,” he smiled.

“As Disraeli said  - the life of the dead is placed in the memory of the living.

“And now we say to John, goodnight sweet prince and hosts of the angels sing thee to thy rest.”

There were emotional scenes when JT’s youngest son Harry, standing on a small stool to reach the microphone read a prayer of the faithful. He uttered the words, “We ask the angels to take good care of you. We love you Dad.”

Speaking at the end of funeral Mass, JT’s wife Caroline paid tribute to her husband.

“You always knew where you stood with John. He was straight, witty and  honest.”

Caroline said her husband handled his injury with strength and courage.

“There was many, many difficult days but his sheer determination and strength of character gave him three years and four months together with us,” she said.

Speaking outside the church, racehorse owner JP McManus in whose racing colours JT enjoyed many wins, paid tribute to Caroline, describing her as “a wonderful woman.

“He was blessed to have a girl like her. He was a very, very direct man. He never used two words when one would do. He told you everything exactly as it was.,” he continued of JT.

Mr McManus mingled with many who had travelled to County Limerick for the funeral including  Jonjo O’Neill, Willie Mullins, Gordon Elliott, Tom Taaffe, and Ted Walsh.

President Michael D Higgins and Taoiseach Enda Kenny were represented by their ADCs at the funeral. The Taoiseach personally rang JT's wife, Caroline to express his sympathies.

Pallbearers including JT’s brother Aongus and his racing mentor and close friend Enda Bolger carried the coffin of the horseman to his final resting place in the local cemetery.