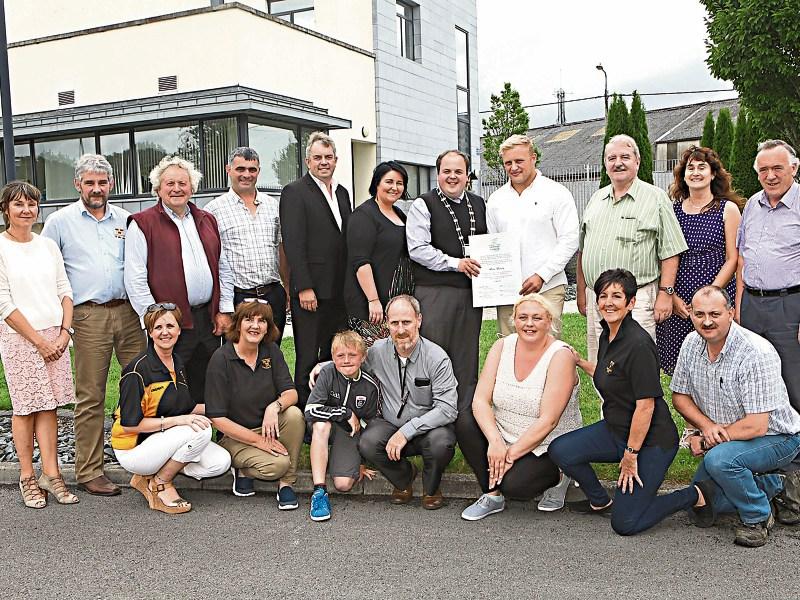 Councillors from the Adare Rathkeale district have honoured Under-20 rugby international Ben Betts with a civic reception.

The Ballyhahill native was one of the stars of the Irish U20 team which reached the final of the junior world championships last month.

Despite losing out to England in the final, the team made history by defeating heavyweights including New Zealand, Wales and Argentina along the way, with Ben playing a key role throughout.

Ben started his playing career with Estuary RFC in Shanagolden before moving to Young Munster. He recently signed a one-year deal with the Leicester Tigers Academy.

He was accompanied by members of his family at the civic reception in the Rathkeale offices of the Council last Thursday.

Speaking at the reception, the cathaoirleach of the Adare Rathkeale area, Adam Teskey, congratulated Ben on his achievements to date and wished him well for the future.

“We are delighted to congratulate Ben on what he has achieved for himself, his team and for the area,” Cllr Teskey said.

Also at Thursday’s meeting the councillors approved a land swap deal between Limerick City and County Council and Rathkeale Community Games. Under the agreement, the council will give a 25 square metre section of the public carpark in the town to the community games group for the construction of a storage shed. In exchange, the council will receive a nearby piece of land measuring 108 square metres.

It was pointed out that the net effect of the exchange would be “marginal”, only involving the loss of two car parking spaces.

The transfer agreement is conditional on the community games group getting planning permission for its proposed development. Meanwhile, Cllr Teskey said the council had agreed to his proposal to draw up a public improvement and landscaping plan for Rathkeale.

“That way, if money becomes available at some time in the future then it will be shovel-ready,” he said, pointing out that such a project would add to the work that has already been done in the town such as the development of the civic offices.