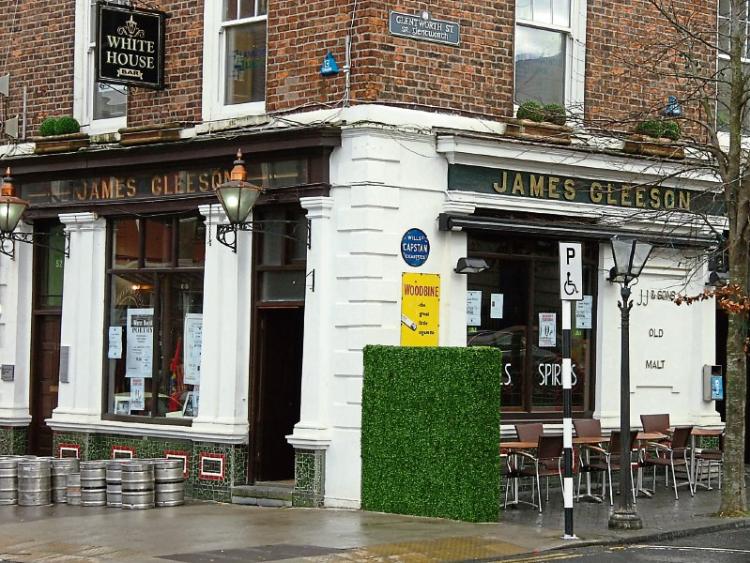 LIMERICK council has confirmed the new owners of the White House pub have sought clarity on what items must remain in the premises for conservation purposes.

The 220-year-old Glentworth Street pub closed for refurbishment last week, and there are fears among its regulars about how the interior of the unique hostelry will appear when it reopens in four months.

The bar has been bought by a consortium believed to be fronted by the former Munster rugby player Damien Varley, plus two other high-profile first team players for the province.

The work which can be done on the interior is limited as the White House is listed as a protected structure in the Limerick City Development Plan.

But a spokesperson for Limerick City and County Council has confirmed the local authority has received a request under section 57 of the Planning and Development Act.

It has also been confirmed the council’s conservation officer has made a number of visits to the pub in recent weeks to “inform” the new owners of the White House of their obligations under conservation law.

Meanwhile, a professional group of architects, historians, planning consultants and conservation consultants are in the process of forming a committee to ensure the White House “retains its unique character”.

It is understood they will hold a press briefing next week after meeting with senior council staff.

The Limerick Leader understands the new owners have already engaged with architects familiar with the city’s Georgian streetscape.

Artist Kate Hennessy, Naughton’s Place, says if any major changes are made to the White House, it would be a “tragedy for Limerick’s cultural life”.

“We have enough bars with huge sports TVs in them. We do not need any more,” she said, referring to constant rumours about the future theme of the premises.

Ballynanty man Mairtin O Briain, a regular reader at the poetry nights which took place in the White House, added: “It is unfortunate we have been unable to make contact with the new ownership to establish what is happening.”

The Limerick Leader attempted to make contact with Mr Varley this Wednesday, but was unsuccessful.

Kate said: “I have been going there since the late 1960s, and it was always a home for artists, actors, journalists, painters, arts students. It was always a welcoming place, and quite bohemian. It welcomed the gay community at a time when they were often barred from other establishments in the city.”

She added: “It was a welcoming place for women and young girls at a time when they could not go into a bar as a young man could unaccompanied. I could walk into the White House bar any night and all my friends would be there. It was fabulous.”

Mairtin said whatever form the White House takes when it reopens in the autumn, its poetry tradition “must be maintained”.

“The important  thing to note about the White House is it was open to all. There was no exclusiveness in the manner which the poetry was run. Everybody could make a contribution and feel free. Also, many of the poets who began their career reading their poetry in public in the White House have also been published. Some of these poets moved onto greater things, but still revisit the pub,” he concluded.