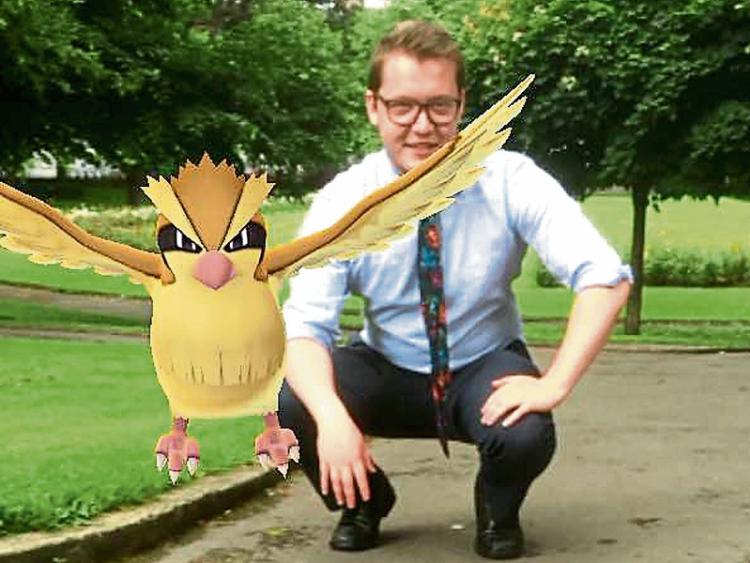 Reporter Fintan Walsh eyes up a ‘Pidgey’ at People’s Park, but fails to catch it Picture: Adrian Butler

TWENTY years after the anime television series won the hearts of nearly every child, the Pokémon fad has returned — only this time through a highly addictive, senseless mobile game.

The Pokémon Go app was launched in the Republic of Ireland last Saturday, days after millions of people around the globe were already glued to game, and it is now — arguably — of one of the most popular, quirky trends in the digital world, so far.

So, if you are one of our clueless readers, wondering why there are congregations of phone-users swiping their devices in shopping centres, or densely-packed places, that is your answer — Pokémon.

The app is simple, but strange. The game is connected to a GPS tracker through Google Maps. After you create your avatar, you can now walk the streets of Limerick in search of the critters. As you walk along, observing your map, a Pokémon will sprout out of nowhere. When you touch it, your camera will be activated, and you will then see the street view in real time, and maybe a purple rat, or hypnotic armadillo appearing on your screen through augmented reality.

Here, you will be able to catch the Pokémon with a Pokéball. Using your trusty finger, you can swipe your Pokéball towards the Pokémon. If you’re lucky, it will hit off the innocent creature and store it within the claustrophobic confines of the ball. You can then force this Pokémon to fight other, more dangerous Pokémon at landmarks around the city. Not very romantic, but this what you have to do to be the very best, like no one ever was.

Limerick has hundreds of Pokéstops — places where you can pick up useful items for when you get slaughtered at impossible gyms. Pokéstops are usually popular landmarks, like the boardwalk, or a church or, weirdly enough, graveyards.

Gyms are places where you can join teams and fight other local players. Gyms are more scarce than the stops, and are situated at more notable places, including the former Presbyterian Church , Tait’s Clock, Sarsfield Barracks and graveyards.

You can train your Pokémon by catching more Pokémon of the same kind. It is also important to note that users should be conscious of their surroundings while playing the game, to avoid any nasty bumps into strangers who may not appreciate your adventures.

When you play it, you intuitively know when somebody nearby is also hooked to it. The other gamer slowly walks by, concentratedly looking at their phone and then gives you a quick, confused glance, as if to say: “Why am I playing a computer game on a boardwalk at 1.30am?”

There are three main reasons why there is a viral fascination in the game; nostalgic entertainment for old Pokémon fans; people’s interest in new technology and trends; and the novelty of seeing monsters dance around your office. Not many people will agree with it and say “Pokémon is for kids”, but, really, games are for everyone.