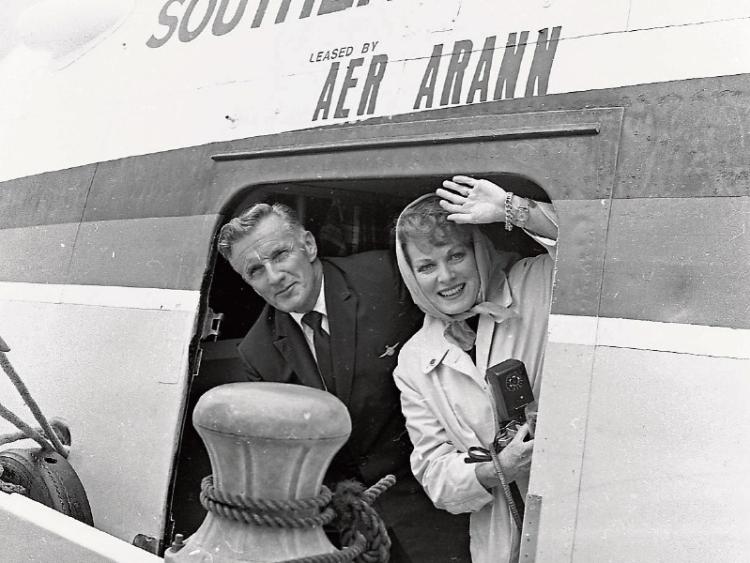 The late Maureen O'Hara arriving by seaplane at Foynes with her husband, Captain Charles F Blair, in July 1976

PLANS are being drawn up to develop a new wing of the Foynes Flying Boat Museum dedicated to Maureen O’Hara after the family of the legendary actress - who died last year - donated her entire collection of memorabilia to the museum.

A container load of items belonging to the star has already been brought back to Foynes, with more to come. According to Margaret O’Shaughnessy, director of the museum, it contains over 50 dresses, as well as all her awards and a plethora of other belongings.

“We have been blessed and delighted and thrilled that Maureen O’Hara’s family have decided to give us all her old memorabilia,” said Margaret, who was a close friend of the actress for over 30 years.

“It is a very exciting development for the museum,” she added.

The collection also includes a number of items belonging to and connected with Ms O’Hara’s former husband, Captain Charles Blair, the aviation pioneer who made the first non-stop commercial flight from Europe to New York.

In October 1945, he flew his airline AEA’s last scheduled flying boat out of Foynes.

Among the items donated to the museum is the Harmon International Trophy which was presented to Blair by President Harry Truman in 1951 in acknowledgement of his contribution to aviation.

“We will be developing a new wing in the museum to house all these items,” Ms O’Shaughnessy said.

Maureen O’Hara, who died on October 24 last, was a regular visitor to Foynes and had many friends in the area. In 1989, she officially opened the Flying Boat museum and remained a patron and loyal supporter for the rest of her life.

Indeed, according to Ms O’Shaughnessy, it was Maureen who first encouraged her to pursue her dream of opening the museum in 1986. “I rang her in her home in Glengariff and I told her what I was thinking and she said: Don’t mind thinking about it. Do it. You must do it”,” Margaret recalled.

Maureen’s visits to Limerick often coincided with her birthday, August 17 and her 80th birthday was celebrated in the Dunraven Arms Hotel in 2000. She also insisted that the premiere of Only the Lonely, the film for which she came out of retirement, would take place in Limerick, in the old Savoy Cinema.

The Dublin-born actress starred in a slew of movies in the 1940s and 50s but was probably the best known in Ireland for her role as Mary Kate Danaher in the 1952 film The Quiet Man.

Later, she would say of the role:  “I have often said that The Quiet Man is my personal favourite of all the pictures I have made.

“It is the one I am most proud of, and I tend to be very protective of it. I loved Mary Kate Danaher. I loved the hell and fire in her.”

Ms O’Shaughnessy said there are plans in the museum to host a special event to commemorate the first anniversary of her death this October: “We will be celebrating her life in music, film and fashion.”