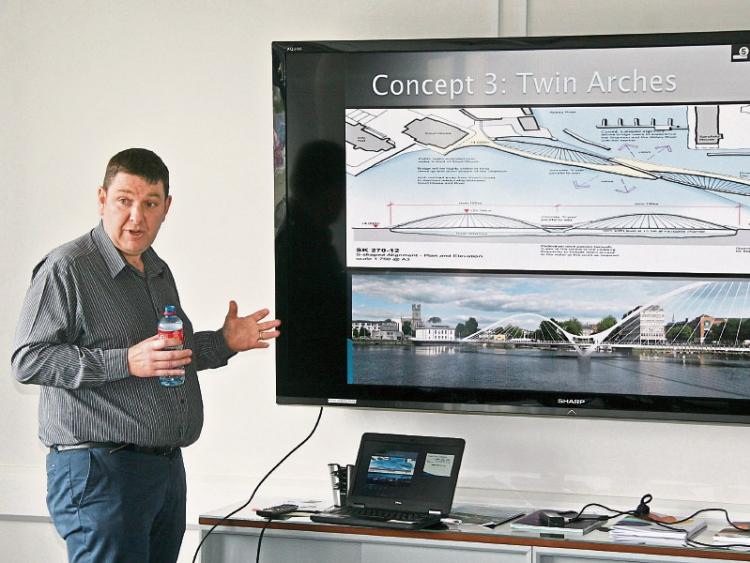 Council official Kieran Reeves addressed some councillors, and members of the media on the bridge last month

LIMERICK council’s economic boss Dr Pat Daly said the anonymous donor - believed to be JP McManus- is not tied to one design for the proposed the multi-million euro footbridge.

He was speaking at a council meeting this week, where members were given a presentation of the controversial project, which could connect Arthur’s Quay to the courthouse, via the old Potato Market.

He confirmed a public consultation would happen on the scheme – which he says would cost between €8m and €17m – adding the local authority is “staying open to any approach and any ideas.”“We are limitless in terms of interpretations,” he added.

Despite this, there was still huge scepticism from the floor to the project, with councillors expressing upset at the location, plus the impact it could have on the flow of the Shannon.

A group from the Footbridge Folly group, and other parties opposed to the project sat in the council gallery, while a notice was erected at the quay behind the Hunt Museum warning the city’s boatmen of the consequences of building a footbridge.

The notice warned that a bridge would “terminate” marine activity, “limit boating and watersport”, “banish birds and fish,” and “multiply flooding upstream.”

Concerns over the impression the bridge would have on the view were dismissed by Dr Daly, who preferred to point out a new “iconic” view which would emerge from the middle point of the footbridge.

But Independent councillor, and barrister Emmett O’Brien, who works close to the area, said council bosses have an “obsession” with it.

He believes any public consultation will have the same result, recalling the quote from Henry Ford that “You can have any colour car you want, so long as its black”.

”It is a form of cultural, and social vandalism, and I cannot understand it,” he said, pointing out that previous plans for a marina in the same part of the river had sunk without trace, because of the sheer current of the Shannon.

“While it was a noble idea, it just did not work. It was a white elephant, and we are talking about putting something on top of it.

“So not only will we have a position where there is an un-navigable stretch of water, we now potentially have a bridge which could cause flooding,” he said.

Mayor Kieran O’Hanlon has welcomed the fact the public will now be asked to submit ideas.

He said: “The perception is there has been no consultation. All the public are to be consulted on this. It is a blank sheet as far as I am concerned.”

The metropolitan district mayor Michael Hourigan said: “I don’t think we should let this project die. All of the ideas are just illustrations on what might happen. At the end of the day, this will create footfall and a public space on the river.”

But Cllr John Gilligan, Independent, warned the current plan would “destroy” the “premier view of our city” between the Sarsfield and Thomond bridges.

Cllr Daniel Butler, Fine Gael, said it is key the money is not wasted, and hailed the “creative yet pragmatic vision” outlined by Healy and Partners. This will see a boardwalk-style development, stretching from the Sarsfield Bridge all the way to the courthouse.

Fine Gael councillor Marian Hurley said many people she has spoken to outside Limerick – including a Sligo engineer – believe building the link is a “no brainer”.

Sinn Fein’s Séighin Ó'Ceallaigh said he would be broadly supportive of the bridge plan, but criticised the council for not consulting properly with councillors, adding the first time he heard about it was when reading about it in the Limerick Leader.