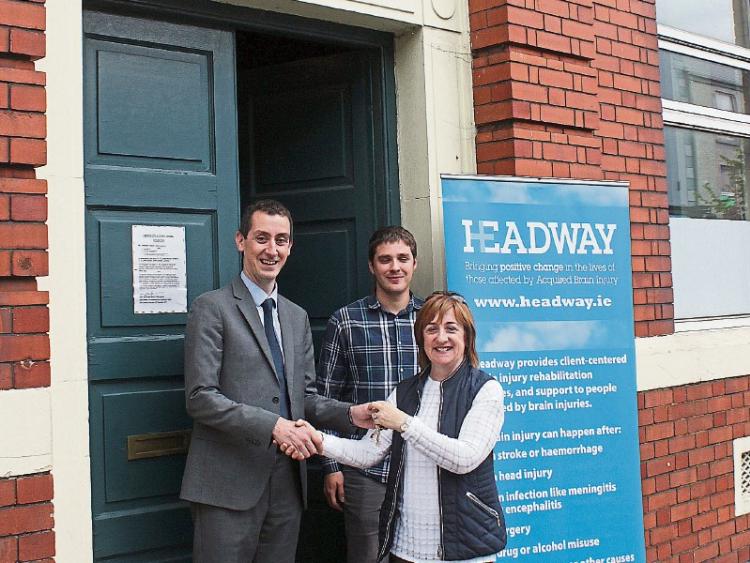 Patrick Seymour, Power and Associates, hands over the keys of the new Headway office

THE former AIB in William Street is to be transformed over the coming months, after the . charity received the keys to the premises.

Thanks to funding from JP McManus, the charity – which exists to help people with acquired brain injuries – was able  to purchase the unit, and is planning to transform the three storey building into an educational centre and office use.

Headway referral officer Rebecca Barry hopes “with a good wind and a good commitment”, they hope to make the move from their current office in the Dock Road by Christmas.

But between now and then, a lot of work needs to be done to transform the interior of the building, including installing a lift to link the three floors.

It means Headway will be able to serve more than 60 clients. It is hoped that unlike now, more people can be seen at once, due to an increase in space.

Rebecca hopes the computer rooms will grow, and there will be a bigger arts and creative space.

Rebecca says: “To date, we have struggled with premises which have not bee designed fit for the purpose for the people we serve, people with acquired brain injuries. But the design for this building is to be tailored for people using it.”

The decision to move to the city centre was taken following consultation with those who use the service.

“We looked at premises outside the city, in industrial estates, but our clients wanted to be in the centre, where it is busy, and they are involved with other people. We took that as a direction,” Rebecca explained.

Paul Creaven, community integration officer with Headway, added: “This is a fantastic opportunity to be more part of the community in Limerick. headway is about integrating into the community, and it doesn’t get much better then being close to the main street in Limerick city centre.”

Headway chief executive Kieran Loughran said: “We owe a debt of gratitude to our benefactor JP McManus who so generously gave to support our services. It is good news for our clients and for people living with an acquired brain injury.”

Patrick Seymour, Power and Associates, which handled the sale on behalf of AIB – which left William Street in 2012 – said: “The building has been vacant a number of years, so it is good to see Headway taking up the occupation of a building on such a prominent corner of the city. It is a good move for Headway, and another occupancy in the city centre, which is good for the city overall.”

In order to ensure Headway is in its new premises as quickly as possible, a ‘Get Headway Moving’ appeal has been launched. You can donate by calling 061-469305 or by visiting www.headway.ie.