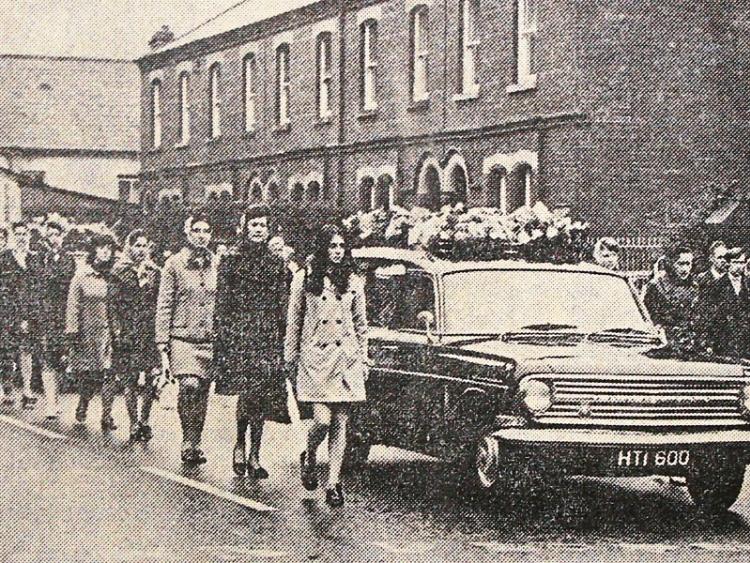 Forty-four years ago: The funeral of the three Limerick women was front page news

THE Mayor in the Greek island of Rhodes has commissioned a plaque in honour of three Limerick women who lost their lives in a tragedy on the island in 1972.

Thirty two people, including Limerick women Theresa O’Shaughnessy, 37, from Sir Harry's Mall, Mary Allen, 40, from St Mary's Park and Josephine Deenihan, 40, from the North Circular Road died when a blaze engulfed the Oscar Restaurant on the island on Saturday, September 23, 1972.

The women, who were close friends, had travelled there for 15 days, and members of their families have been campaigning for years for them to be commemorated in some way.

The women were half-way through their idyllic holiday when disaster struck, after they had arranged to meet a number of other holiday-makers in the popular restaurant and nightclub.

The bodies of the three Limerick women could not be identified beyond a doubt at the time due to the blaze, when around 200 people were in the restaurant, which was burned to the ground within seven minutes.

Some managed to escape, including a Dublin woman, now 82, who was dining with the Limerick women that night.

A faulty electrical system and the highly flammable bamboo walls meant the building was gutted within minutes. The owner of the restaurant was jailed in 1974 for four years for involuntary manslaughter.

Padraig Power, a nephew of one of the victims, Theresa O’Shaughnessy, who worked in Todd’s department store as a cosmetics buyer at the time, said he is delighted that finally the women and other victims will be recognised – 44 years on this September.

“This is the first bit of good news that we have. For many of the families it felt as if there has never been any closure, but we feel that the plaque, which we have been campaigning for since 2014, is a small bit of justice for the women.

“We just want them all to be remembered by future generations. We are very grateful for the assistance of the Irish Embassy in Athens in helping us to achieve this,” he told the Limerick Chronicle.

“I was five at the time, but I remember her [Theresa], she was a lovely person. My parents, who didn’t have a landline at the time, were at mass when news of the tragedy emerged, and a travel agent informed the priest, who ducked out of mass to tell them,” he explained.

Relative Denis O’Shaughnessy said: “It was a hugely traumatic time for the families concerned, more so for our own family, as it took a week for the remains of Theresa to be identified. We will be forever indebted to the late Frank Thompson, undertaker, who went out to Rhodes and came home with the remains of our loved ones.”

Mayor of Limerick, Councillor Kieran O’Hanlon said he is delighted that the Mayor and Municipality of Rhodes has decided to erect a plaque honouring all the people who perished in the fire.

“It was a massive tragedy, which should be commemorated. I would like to pay tribute to those who have continued to look at ways of remembering the victims as a mark of respect and ensure that they have not been forgotten by those in their homeplace.”

A memorial is due to take place in Rhodes in September.

Some 15 to 20 people of the associated Limerick families are expected to attend, along with the Irish Ambassador to Greece.