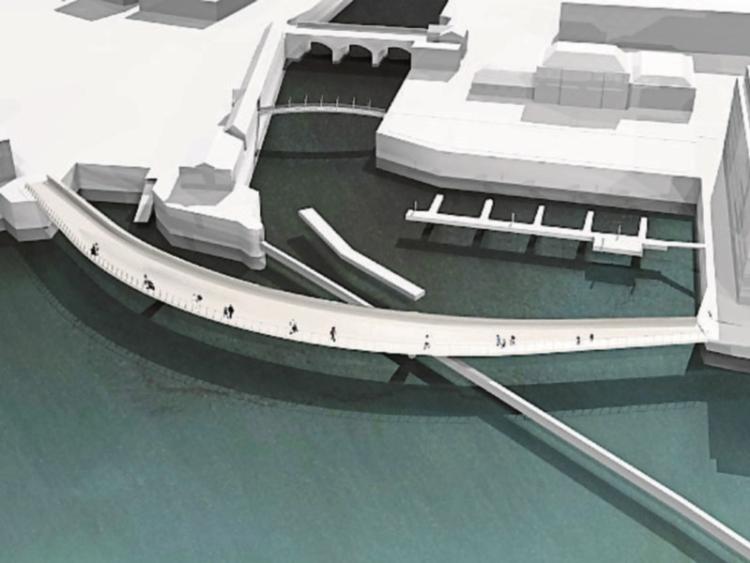 An early design for the Limerick Footbridge, which could link Arthur’s Quay and the courthouse at Merchant’s Quay

THERE are “no limits” on the design of a new river crossing in the city, Limerick council’s economic director Dr Pat Daly has said.

Speaking as he launched the public consultation on the footbridge project – which could cost between €8m and €17m – Dr Daly says the local authority is “staying open to any approach and any ideas.”

“We are limitless in terms of interpretations,” he said.

The local authority – thanks to funding from a philanthropist, and government support – is looking to construct the footbridge, which will link Arthur’s Quay with the courthouse.

But the project has generated controversy, with many expressing upset at the location, and the impact it will have on the flow of the river.

Disquiet has also been expressed over the identity of the private donor, who is giving €6m to the project.

While Dr Daly did not reveal the person’s identity, he said they are not tied to one design.

“The philanthropist supports the best design for the best project,” he told councillors at this month’s meeting.

With members of the Footbridge Folly action group in the public gallery, Dr Daly played down fears of the impact the proposed bridge will have on city views, saying that the centre of the structure will promise a “new and iconic view” of Limerick.

Mayor Kieran O’Hanlon welcomed the consultation, saying: “The perception is there has been no consultation. All the public are to be consulted on this. It is a blank sheet as far as I am concerned.”

Independent councillor John Gilligan welcomed the intervention of a philanthropist, quipping: “You can count what has been donated to the city on one hand and have a couple of fingers left.”

However, he said any link should be at the portion of the river between Sarsfield Bridge and the Shannon Bridge.

“The area between Sarsfield Bridge and Thomond Bridge is the premier view of our city, and to destroy this is just wrong,” he said.

He also claimed that putting the bridge there would be “illegal” and “most likely thrown out by An Bord Pleanala”.

Other councillors were more upbeat on the proposal, with metropolitan district mayor Michael Hourigan urging his colleagues to think of the link not as a bridge, but a public space on the River Shannon.

Cllr Cian Prendiville urged caution on any design, saying: “At the end of the day, this is not something on a postcard or for the front of a brochure, it is something which will make life better for people in the city.”

Sinn Fein councillor John Costelloe, based in nearby Nicholas Street, claimed if the bridge proceeded “it will be the biggest act of vandalism our city has ever seen.”

Cllr Daniel Butler, Fine Gael, says while he does not see the point of a footbridge, he would like to see a crossing of some kind.

“The River Shannon is an incredible resource and we do not use it to its full capacity. It needs to be more than a crossing. It should be about reclaiming the river,” he told the meeting.

His party colleague, Cllr Michael Sheahan, who has been vocal in his opposition to the bridge, praised council bosses, saying: “It is good to see we have stepped back from the brink of public discord and anger. We must do what is good for the people of the city, and all the users of the River Shannon.”

Cllr Marian Hurley says she has spoken to people outside the city, including a Limerick-born engineer based in Sligo, who said building the bridge is a “no brainer”.