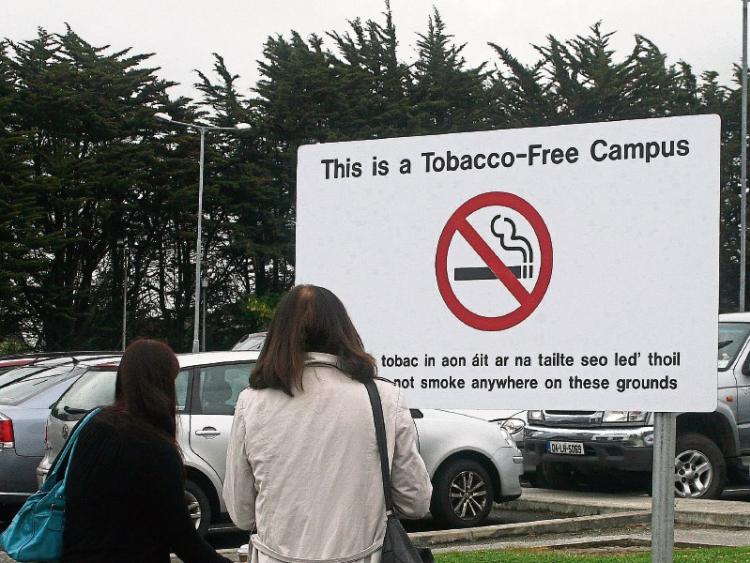 MORE than 1,000 patients and visitors are still smoking at University Hospital Limerick, despite a smoke-free policy in place for the past four years.

According to audits received from the UL Hospitals Group, between January and June, 462 visitors and 667 patients were found smoking on the Dooradoyle campus.

A number of people contacted the Leader to express concern over the issue, as people in breach of the hospital policy can be seen smoking outside the A&E and reception entrance.

One frequent visitor, who does not wish to be named, said that “at any given time, there could be up to five people smoking” on the grounds.

This Monday, the Limerick Leader witnessed a woman smoking while holding a young child, another woman smoking next to her, with a member of security staff nearby, outside the A&E entrance.

There were 251 fewer people found smoking at UHL in comparison to audits in the same timeframe in 2015. This year, there was a 33% drop on the 688 patients found smoking on campus between January and June 2015.

However, there was a marginal 2% decrease in the number of patients smoking this year. There were 682 patients found smoking, between January and June 2015.

In the first half of 2015, 24 staff members were identified smoking on the campus. This year, there were no staff seen to be smoking at UHL.

A spokesperson for the UL Hospitals Group said that, while UHL is “making progress”, the policy remains “challenging”.

“We are making progress and the numbers of people smoking on the grounds is reducing, indeed most visitors and patients do comply with our smoke-free campus.

“Implementing our smoking policy remains challenging as, whilst our grounds are ‘smoke-free’ and it is against hospital policy to smoke, it is not illegal to smoke. We urge all patients and visitors not to smoke whilst on the grounds of UHL or any of the other UL Hospitals sites.”

Tobacco control is one of the “priority areas” for UL Hospitals Group, as part of its recently-launched Healthy Ireland 2016-2019 programme.

“UL Hospitals would like to thank the many, many visitors and patients who have complied with our smoke-free policy to date , we remain committed to reducing the numbers year on year in line with national policy, changing behaviour does not happen overnight and HSE campaigns such as the Quit campaign also support us locally on the ground.”