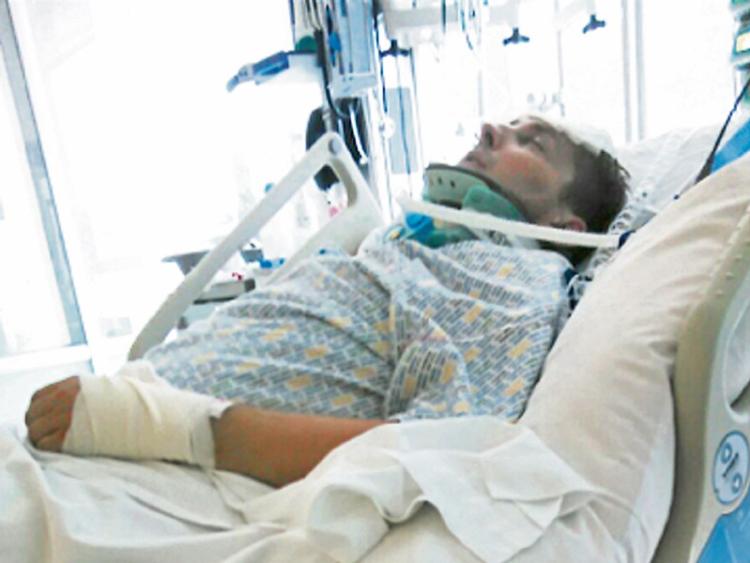 THIS IS the first photograph of a Lithuanian man who was shot in the head by a garda in County Limerick.

Gintare Mikalajuniene, the wife of 36-year-old Tomas Mikalajunas, released the picture to the Limerick Leader. She issued a statement, through their solicitor Michael O’Donnell, which says it is a “miracle” her husband is alive. It is believed the gun may have been discharged accidentally by the garda at a checkpoint between Ardagh and Shanagolden on June 28.

The other Lithuanian man in the vehicle - Aurimas Petraska has been remanded in custody after he appeared in court charged in connection with a series of robberies in three different counties.

In the statement, Mrs Mikalajuniene said that the bullet went in a downward direction after he was shot in the right hand side of his face.

“Part of the lead is lodged around the top of his spine and has not been removed. He has recently been removed from intensive care and now is in the high dependency unit in University Hospital Limerick. He is disorientated and can’t communicate. He has ear damage, his jawbone is damaged, he has lost a lot of teeth. He is fed at the moment through a tube. It is a miracle he is alive,” it reads.

Mr O’Donnell said he has been retained by Mrs Mikalajuniene due to her husband’s condition and has been asked to put the information into the public domain.

“Mrs Mikalajuniene received a phone call in Lithuania telling her that her husband was in a grave and serious condition. This call was received from strangers. This is obviously a source of great upset and distress to her and her two daughters aged 12 and 3.

“The distress is obviously compounded and greatly added to as there are reports of her husband being involved in criminal activity. She is extremely mystified at this and grievously upset because her husband arrived in Ireland on June 23 with a return ticket for July 1.

“Her husband sourced work in the construction industry and was happy at giving his family the good news. He is a qualified builder with certificates and also has a full licence for driving trucks in Europe. She cannot comprehend how her husband came to be shot at very close range and is now left in a very serious condition in hospital.

“She now hopes that GSOC will investigate this is in a comprehensive, detailed and timely fashion and that the truth of the circumstances surrounding the shooting will come into the public domain,” says the statement.

Two separate investigations are underway, one by gardaí in Limerick and the second by GSOC who say it is “ongoing”.