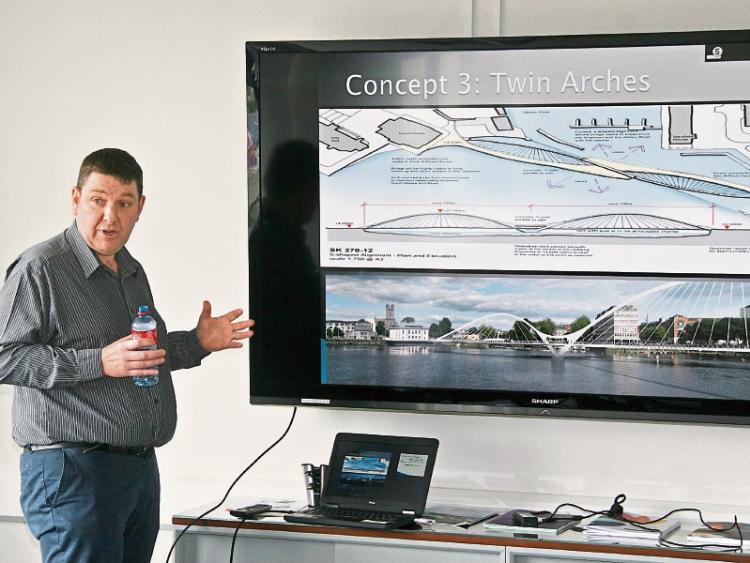 COUNCILLORS in Limerick are this Monday expected to set in train plans to open the proposed €18m footbridge up to formal consultation to the public.

Members will be given a further presentation on the controversial proposal by economic director Dr Pat Daly, before deciding whether to move it to consultation stage.

Opinions remain very much divided on the project, with a pressure group set up in opposition Footbridge Folly, expressing concern over the location of the bridge, its effect on the current of the river, the fact there is an anonymous donor – believed to be JP McManus – and whether the waterway even needs structures upon it.

But boatman Ray O’Halloran, of the Voice of the River believes there are a “silent majority” in favour of the link.

Brian Leddin, of the Footbridge Folly group, said he is “very surprised” to hear these comments, pointing to a petition of 1,000 people against the idea of the footbridge.

“There has been widespread discussion both online and offline, and it is so hard to find anyone in favour of it,” he said, “All the evidence we have is the people of Limerick are very much against it. We had a public meeting in the Strand Hotel, and not a single person spoke in favour of it.”

Mr O’Halloran said: “We have a majestic river, but nothing has been done with it. I think the vast majority of people want this. In the Grand Canyon there are bridges, in Niagara Falls there are bridges. And what are we saying? Not in my back yard?”

His preference would be for the bridge design put forward by the local authority, which has attracted the most criticism.

But the Corbally man said there is finally a “consensus” from various ghroups the river is finally being looked at.

While Mr Leddin says he does not feel there is a need for any structure like this on the Shannon, Mayor Kieran O’Hanlon has differed.

He said: “I would like to see some structure there which is acceptable to the vast majority of people. I don't think anybody has the right to say we will have a bridge or we will not have a bridge. Everyone has an opinion, and i'm happy if we go out and consult with the public. Only after that decide whether to proceed with professional consultants.”