Mixed response to concept for 'People's Footbridge' in Limerick 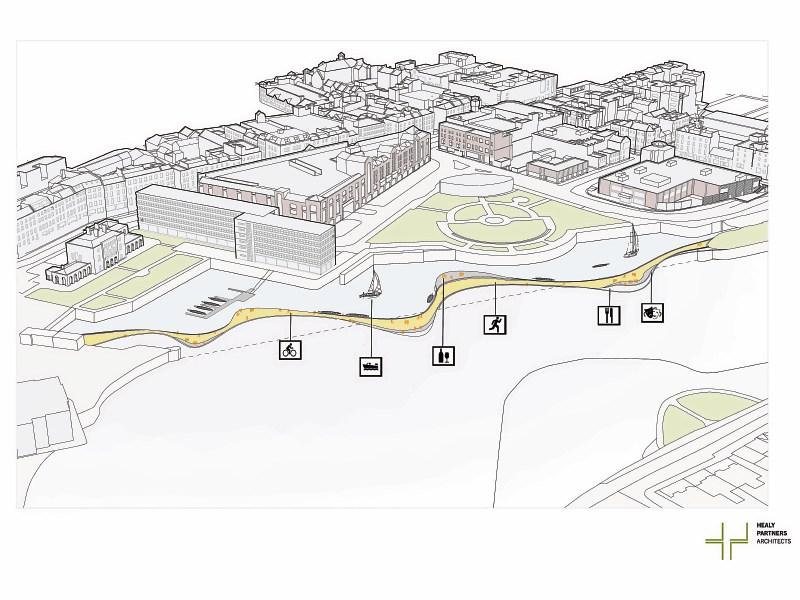 A sketch of the alternative ‘People’s Bridge’ design, by Healy and Partners architects, which may be considered for the €18m project

AN ALTERNATIVE design for the proposed footbridge along the Shannon has been discussed by almost 15,000 people in ten different countries.

In response to huge criticisms of a footbridge proposed by the council to connect Arthur’s Quay and the courthouse, running behind the Potato Market, city architects Richard Rice and Michael Healy have designed an alternative link.

Exclusively revealed by the Limerick Leader last week the walkway – provisionally titled ‘The People’s Bridge’ – would start at Honan’s Quay, and cross the rear of the island of Shannon Rowing Club. It would then link to the old Potato Market.

Speaking to the Limerick Leader this Wednesday, Mr Healy showed statistics from his company’s social media accounts which reveal it has been reached by a total of 14,690 people in places as far afield as Poland, Austria, Croatia and Italy.

“The comments have been mostly positive,” Mr Healy said, “People we meet in the street are discussing it, and the reaction has been overwhelmingly positive.”

However, the Limerick Leader understands problems have been identified with the design, relating to its impact on the main drainage of the river.

Mr Healy rejected this, saying: “The boardwalk is tidal. it works at low tide and high tide. These platforms would be similar to the platforms currently in the river, so you’re changing nothing.”

Healy and Partners has held no formal discussions with Limerick City and County Council, but have engaged with a number of councillors on an individual basis, Mr Healy said.

Corbally man Ray O’Halloran, an experienced boatman though, has expressed concern over the design.

He explains the presence of a ‘wall’ in the river, which would cause a ‘waterfall’ in the water across from the Hunt Museum.

“They are talking about pontoons running up along it.  There is a breakwater at the end of the Abbey River. The tide runs down there at 900 cubic metres a second. Five minutes up the river, there is a pontoon similar to what they want to put there. It is mangled. The steel in it is twisted and contorted,” Mr O’Halloran said, “You cannot believe the power of the water at that stretch, it is incredible.”

Former metropolitan district mayor Michael Sheahan, who has been one of the more vocal voices against the proposed footbridge, is reserving judgement about the new design.

He said: “Pardon the pun, but I have seen nothing concrete on what I am voting on as regards visuals. These are the most important things here. The visuals and the location. There is total confusion regarding the finished project, its possible shape and design, and most importantly of all, no-one can put a figure on what it is costing.”

However, there has been praise for the new concept from former mayor of Limerick Jim Long, who said: “It is a wonderful alternative to what was proposed. Well done to all concerned, and congratulations on their vision.”

Mayor Kieran O’Hanlon has said the new proposal is “worth considering” alongside a list of other designs.He said: “I hope it will become something iconic, another Thomond Park in a sense that when you look at it, you will say ‘That’s Limerick.”

On Monday week, metropolitan councillors will vote to decide whether they should seek consultants views on the bridge – – despite the design of it remaining unclear.

It is understood that contrary to some reports, no formal party whip will be imposed.

This will mean councillors, regardless of party, can vote in whichever way they please.

There had been reports that Fianna Fail and Fine Gael may vote en-bloc in favour. See Letters Page 16.