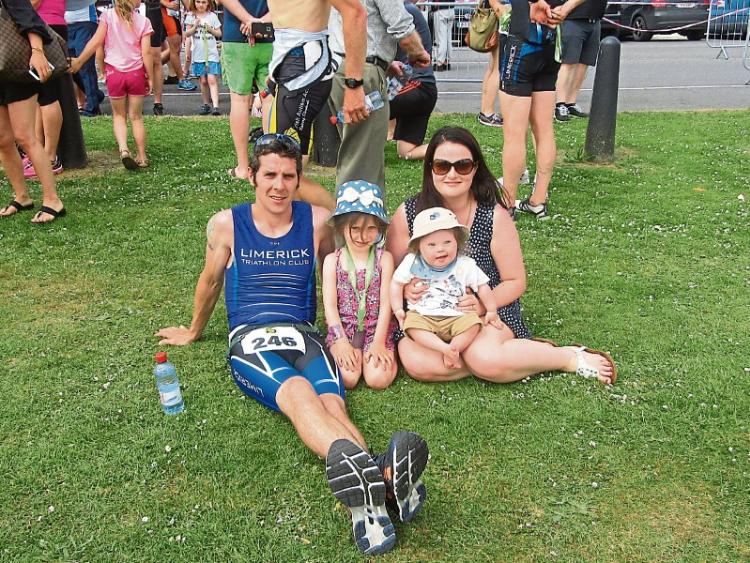 Cycle organisers: Craig and Stacey Storan, with their children Aoife, 5, and Ben, who is almost two years old

A CHARITY cycle in aid of Down Syndrome Limerick takes place on Saturday morning.

Up to 80 cyclists will get in the saddle, and cycle the 100km to Kilkee as part of the fundraiser, which is being organised by   Stacey and Craig Storan from Kildimo.

The cycle will kick off from Tom and Jerry’s pub in Lower Glentworth Street at around 9am on Saturday, and the chairperson of Down Syndrome Limerick Noreen Keane hopes €2,000 will be raised for the charity, a parent-led group which supports parents and children with the genetic condition.

Stacey and Craig welcomed their second-born baby Ben into the world last November.

He receives regular speech and language therapy from Down Syndrome Limerick, and takes part in a weekly music therapy class.

Noreen, who praised Stacey and Craig for organising the event, added: “The money raised will contribute hugely to providing support services to our children and adults with Down Syndrome, for example in speech and language therapy, which we heavily subsidise, music therapy, drama, dance, arts classes. We would provide a range of services for children and families.”

While she will not be donning the lycra herself, Noreen has been told by cyclist friends the 100km trek to the coast is “a nice, easy cycle”.

Registration for the cycle costs €25, and participants are also welcome to collect sponsorship.

Upon arrival in Kilkee, all are welcome at the town’s Greyhound Bar for a pig on the spit barbecue between 5pm and 7pm.

Noreen has also asked people not taking part to support the cyclists as they depart, along the route and on arrival in Kilkee.

Ben has one sister, Aoife, who is five years of age.

Ger Storan, Craig’s father is the proprietor of Tom and Jerry’s pub.