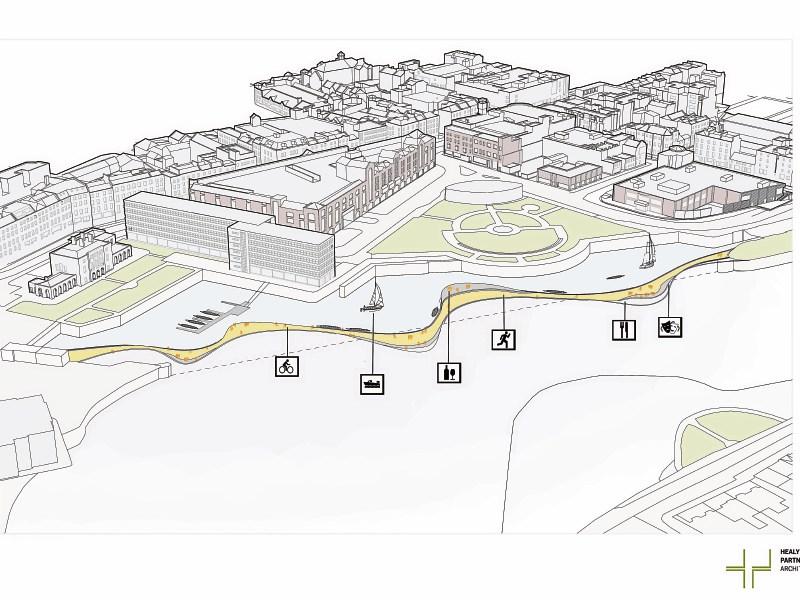 The alternative People’s Bridge design, by Healy & Partners architects. Below, an example in Toronto

THE newly elected Mayor of Limerick has urged people to “keep a cool head” over the plans to build a new footbridge across the river Shannon, saying it could take two to three years before it is built.

While the current proposal has been widely criticised, there is now hope that an alternative vision proposed by Healy & Partners architects in the city could finally be the bridge that calms troubled waters.

The latest proposal was exclusively revealed in the Limerick Leader broadsheet edition last weekend, and has already garnered positive support.

Former mayor of Limerick, Jim Long, said this “new concept is a wonderful alternative to what was/is proposed. Well done to all concerned and congratulations on their vision”.

Councillor Kieran O’Hanlon, the newly elected mayor of Limerick, said the new proposal is “worth considering”, but he believes other designs will also be considered in due course.

“It’s a pity that the project has been mishandled to date, in terms of how it was announced. But the benefit we have gotten from it is that everyone is talking about what we should do with the river. I hope it will become something iconic, another Thomond Park in a sense that when you look at it you say ‘That’s Limerick’.

“The council will soon vote on whether they should seek consultants’ views on the bridge – not on any specific design yet – and there will be widespread consultation with the public. We want the bridge to be something that everyone can be proud of. It could be two to three years yet before we see any work on it, so people should keep a cool head,” he urged.

Michael Healy and Richard Rice have designed a longer, more interactive bridge for the public, which they claim could also be built within the €18m budget.

This alternative strategy has the river crossing starting at Honan's Quay and crosses over to the rear of the island of Shannon Rowing Club. The boardwalk achieves a connection linking over to the Potato Market, with the opportunities for activities and kiosks on the route.

The engineering of these boardwalk platforms would be similar to the river platforms currently used on the river.