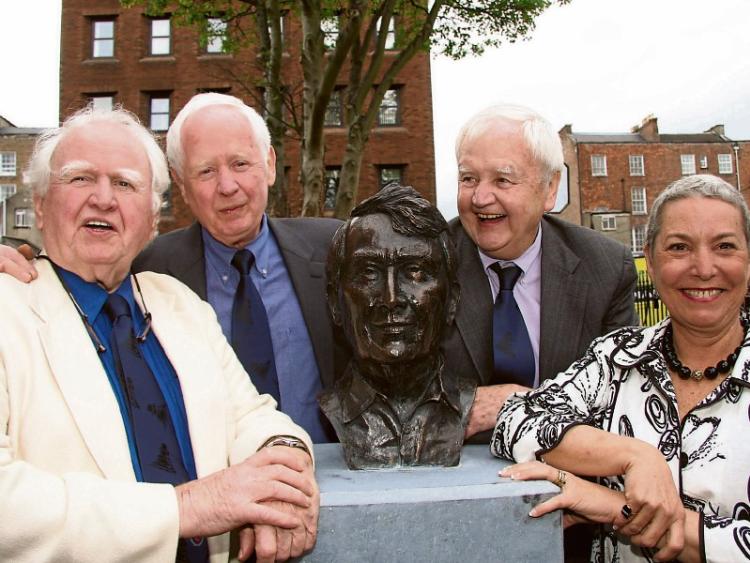 The McCourt family on a visit to Limerick in 2011 for the unveiling of a bust of the legendary writer Frank McCourt. Pictured are Malachy McCourt, plus his late brothers Alphie and Michael, and Frank’

TRIBUTES are being paid on both sides of the Atlantic to Alphie McCourt, Frank's youngest brother, who passed away suddenly in New York at the age of 75.

His only surviving brother Malachy McCourt, 84, confirmed the sad news in a message on Facebook in the early hours of Sunday morning, saying he had passed away while taking an afternoon nap.

“We have no celebrations of his life or the books yet but we won't let him go gentle into the good or bad night,” Malachy added.

Dominic Taylor, of the Limerick Writers' Centre, who invited Alphie to a plaque unveiling of his brother Frank last year outside South's bar, said he was saddened to hear this news but said "it was a privilege to have known him".

Adam Howell, who produced the musical of Angela's Ashes, staged for five nights in the Lime Tree theatre in Limerick in 2013, also paid tribute.

"He became a great supporter, confidant, advisor and friend. I used to joke with him that I had to pinch myself sometimes because he'd always been a 'character' in a book and film and now I knew the real person. He always found that funny, I think. He was extremely generous and giving," he wrote.

Born in Limerick in July 1940, Alphie grew up in the city, before emigrating to America in 1959, spending a good part of his life in the restaurant and bar trade. During his youth he toyed with the idea of journalism, and later undertook a degree in law at University College Dublin, which he didn’t finish.

While Alphie grew up in the city’s back lanes, went to the Christian Brothers, played rugby with Young Munster and was a member of the Limerick Debating Society, he said he always felt "a little bit removed" from Limerick life.

He left for the land of opportunity at the age of 19, and alternated between living in New York, then Montreal in Canada, before moving down to California, and settling back in New York, with his wife Lyn and daughter Alison.

He built swimming pools in California - “a different kind of university” - and was drafted into the Army for two years, where he was a food inspector.

The youngest of seven, Alphie was the last to leave Limerick, and left with his mother Angela, now immortalised in his brother's first memoir, Angela's Ashes, which won the Pulitzer Prize.

“But I knew I wouldn’t come back. She eventually settled in New York and it was Okay [for her], just Okay, never good. If you’re going to New York, you have to go at a young age, 19 or 20. Going away from Limerick at that time was par for the course. Just about everybody I knew left, except people who had family businesses or something. Our situation would have been enormously different if we had a piece of land.

"We were pretty much first generation in Limerick. We didn’t have the close connections that other people had. I always felt a little bit one step removed.”

He also spoke about death in that interview.

“When we were landing in Dublin [Airport] I had a touch of it [nostalgia], because I began to realise all the people who aren’t here. All the time that has passed. I don’t want to get too deeply into that, but we’re here today and we’re gone tomorrow. We had our good times, enjoyed each other and made the most of each other. We’re all passing on through.”

A celebrated writer, his works have appeared in the Washington Post, and the Villager (New York), and in 2009, he published his own memoirs, entitled A Long Stone’s Throw in 2008, joking that he didn't want to be just a footnote in his family's history.

Frank published his trio of memoirs - selling more than 10 million copies to date -  and a children’s book, Malachy followed with a further two memoirs, and Alphie then succumbed to the repeated queries of “When is your book coming out?” and wrote is own version of history, which has since been reprinted.

“I felt I should tell my part of it because my experience was very different from my brothers. Somebody asked me that before and I said ‘So I would not be a footnote in the history of my own family!”

Last September, his brother, Michael, a much loved bar-tender, passed away in San Francisco aged 79.

Quieter in nature than his older brothers, Alphie described his older siblings as "heavyweights".

“Maybe it’s in the nature of things that when you’re the youngest brother you tend to be quieter in the company of your big brothers. I don’t know if it’s typical...I think it probably is, especially when you’ve had such heavyweights as I’ve had to deal with. They were men of accomplishments; men of large, large vision. But they always encouraged me, and I had a particular understanding with Frank. And I think we had a respect for each other.”

He is predeceased by his siblings Frank, Michael, Oliver, Eugene and sister Margaret, and survived by brother Malachy, wife Lyn and daughter Alison.