Representatives will be asked to approve footbridge project on July 18 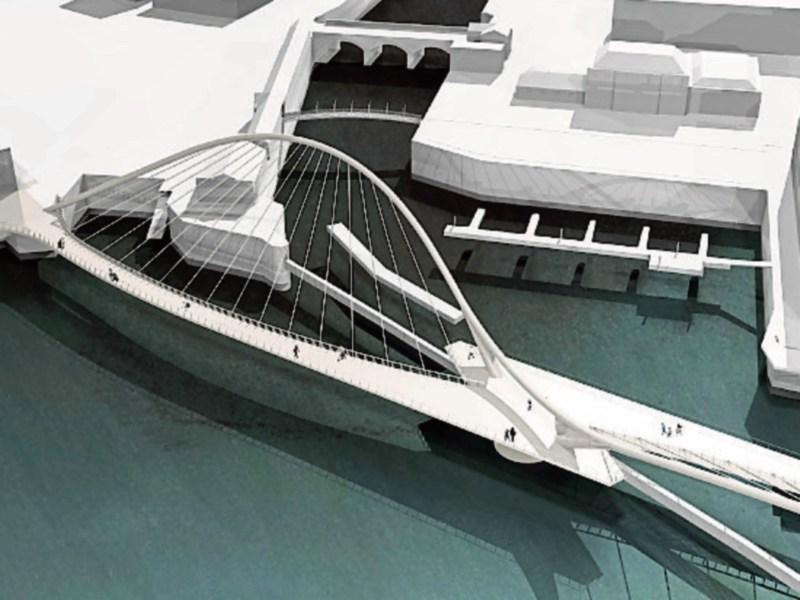 An artists impression of how the footbridge might look

IN LESS than three weeks, elected representatives will be asked to approve of Limerick City and County Council’s proposals for the controversial city footbridge.

Last Thursday, the council held numerous briefings for councillors and the media on preliminary plans for the project, which has faced criticism from politicians, members of the community and lobby groups for a number of months.

During the all-day briefings at City Hall, led by economic director Pat Daly and senior council planners, there were presentations on the project history, the cost range and the proposed designs.

Mr Daly told the press that the footbridge will require approval from the councillors and, finally, An Bord Pleanála. He said that if councillors reject the plans, on July 18, the “project is dead” and money for the project “is lost”.

Newly elected metropolitan district mayor Cllr Michael Hourigan said he found the information sessions “very positive” and that he is “keeping an open mind” in relation to the advancement of the proposals.

“I am not just thinking of the bridge. This is the start of a bigger, bigger picture. It is all about the development of the city. I am very open-minded about it. If you look at it in isolation, you will find negative things to say about it, but when you tie it into the rest [city development plans], it is all very positive,” he said.

He said that a footbridge could be “iconic” in the city centre, and that projects like the boardwalks have been a “tremendous success”.

Though a large number of councillors are still considering their vote, Independent councillor John Loftus said that he is voting “absolutely no” to the project.

“They told us nothing new. If anyone thinks that this is going to attract tourists to the city, you are either a liar or a joker. They have to get real, here.”

Senior executive planner, Kieran Reeves stated that the council has an “indicative cost estimate” that the bridge, depending on the chosen design, could cost between €8.1m and €17.1m.

Mr Reeves said that the project has secured €6m from the Department of Transport, Tourism and Sport, and will secure matched funding from an anonymous philanthrophic source, if the plans are approved.

The three project concepts include a regular platform bridge that stretches out from Sarsfield House to the side of the courthouse, adjacent to the Curragower Boat Club; a bridge with a centre point that “engages with the river”; and the familiar twin-arch bridge that starts at Arthur’s Quay Park and finishes at Merchant’s Quay.

In response to criticisms that relate to environmental damage and a possible impact on the King John’s Castle view, Mr Reeves said that the council “still has to carry out a full environmental assessment, but it is not seen as a major impediment to the project”.

He added that the bridge will also make the castle view “more iconic” to the public.

He also compared the concept to the £14m Derry Peace Bridge and the £22m Gateshead Millennium Bridge in Newcastle-Upon-Tyne.

AAA councillor Cian Prendiville said that he feels they are “being kept in the dark” in relation to the project’s particulars.

“One of our key questions that we [Cllr Prendiville and Cllr Paul Keller] asked was that we wanted to get more information on where this idea came from. We feel that someone is pushing or driving this project,” he said.

Mr Reeves said that the project initially started in response to research undertaken by Fáilte Ireland for the Limerick 2030 economic development plan.

It stated that the Shannon and its riverway were “integral parts” of Limerick city, and that they offer a “new way of experiencing the city”.

Cllr Prendiville said that it “will be a difficult decision and that they will consider it fully”. However, he added that his “gut feeling is that there are other projects that are more important. The real question is that, is this the best use of public money? We need to develop the city for the people who live in it, first and foremost.”

Sinn Féin’s Séighin Ó’Ceallaigh said that the council “should definitely take the views of the public into account and they should be updated, instead of reading it in the newspaper”.

Meanwhile, Labour councillor Joe Leddin has submitted a motion for the July meeting to invite Fáilte Ireland to attend a future meeting to discuss and debate the development of tourism in the city.

Mr Daly said that last Thursday’s discussions were “very positive. We have had good feedback and looked at a number of issues, and we will go back then with a formal presentation in answering those remaining questions and then seeking consent on the day”.

He added that, because the money is on offer, there is a “sense of immediacy” to bring the plans forward.

Letters to the Editor, page 18