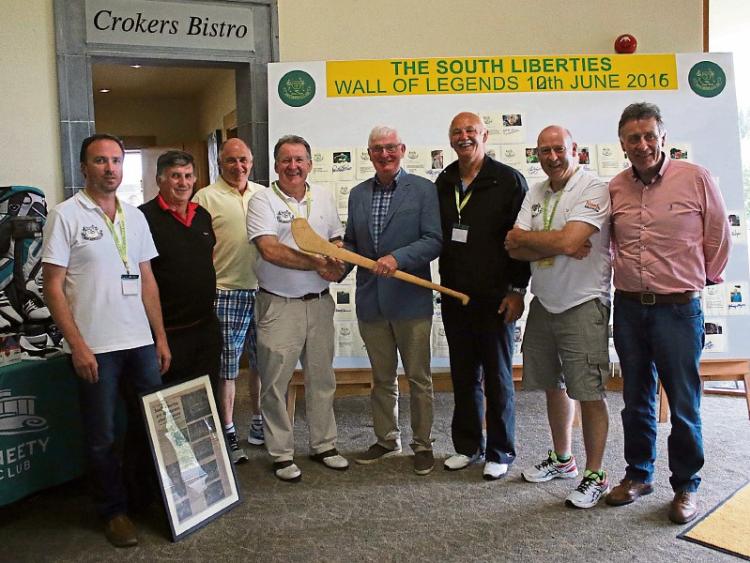 A SIGNED hurley by the 1973 All-Ireland winning hurling team and management has turned up out of the blue because of a supporter’s  dying wish. The touching background story adds even more value to the link to Limerick’s  last Liam McCarthy Cup win.

It started with a chance meeting at a GAA tournament at Wembley Stadium in London in the late Sixties/early Seventies and ended at the South Liberties golf classic at Ballyneety this month.

In the intervening years, the memento of Limerick’s last senior All-Ireland went from Leopardstown Racecourse to Cardiff to Galway where it was kept under Noel Lane’s bed. The Galway legend presented the famous piece of ash to the club and a piece of Limerick GAA history is home for good.

With the help of one of the best full-backs ever to play the game, Pat Hartigan; former leading GAA official, Declan Moylan; chairman of South Liberties, Albert McSweeney and Mr Lane, the Leader was able to piece the tale together.

It begins in London almost 50 years ago at an exhibition game between Limerick and Kilkenny in Wembley.

Mr Moylan, a then Limerick county board official, remembers it well.

“It was a beautiful stadium except the sliothar wouldn’t bounce!”

After the game the Limerick Association in London hosted a reception for the team.

“I saw this couple standing over on their own, I knew they weren’t part of the group. They looked very distinctive. I strolled over and said: “You are welcome.”

“He introduced himself as John Fitzgerald from Cardiff but originally from Abington, Murroe. He was about six foot four inches - a big man - had a moustache and was  very well dressed.  He said he came to see the game, heard we were here and came up.

“I said, ‘You are one of our own, join the crowd’. We had a great chat and a drink and I said they were welcome to join us afterwards, that there might be a bit of a party in the hotel’s residents lounge,” said Mr Moylan.

Mr Fitzgerald and his wife went along and enjoyed the sing-song featuring the likes of The Fair of Cappamore. The expat from neighbouring Murroe even sang a few songs.

“He couldn’t thank me enough for inviting him to the party. We became great friends. He came across to several Limerick matches and the All-Ireland every year.

“He told me something - he said he was in every rugby ground in the world but when he went into Croke Park it was the only ground where the hair would stand up on the back of his neck. He was a huge Limerick supporter,” said Mr Moylan.

Mr Fitzgerald grew up on a farm but had no grá for the land. He told Mr Moylan that he cycled into Limerick railway station, got the train to Dublin and then the boat to England. Cardiff was his final destination where he built a very successful business.

The day after defeating Kilkenny in the 1973 All-Ireland final the Limerick players were feted at a reception in Leopardstown racecourse. “I got all the lads to sign a hurley and present it to John,” Declan added. “He was over the moon with it, he was an amazing character. Limerick won the first All-Ireland football champion-ship in 1887 and when a medal was up for sale he bought it. He had a good business in Cardiff and that’s where the hurley finished up.

“I didn’t think any more of it. John came to Limerick regularly and I used to bring him socialising, he knew all the lads.

“He went to his God two years ago. I didn’t know anything about the hurley until Pat [Hartigan] rang me after the golf classic. It it nice to have it back thanks to John -he was a great man. You would forget about the hurley, it’s a long time ago. It is too long since we won the All-Ireland,” Declan said ruefully.

The hurley is in immaculate condition and all the signatures are as clear as they were in 1973. But how did it get into Noel Lane’s hands?

“I was just the conduit,” said the Galway man.

“What happened was John Fitzgerald was a very close friend of a brother-in-law of mine, Benny Mulkerrins. Ben lived in Cardiff all his life and Ben and John used to come home to matches together .

“When he was ill he contacted Ben and said he wanted him to have the hurley and take it back to Ireland. I was up visiting my sister Mary who is married to Sean - Ben Mulkerrins’ brother.

“We were just chatting away and she produced this hurley, ‘Look what we got from Ben’.

“She showed it to me and I was absolutely amazed. She realised I was amazed with it and she said, ‘Would you like to have it?’”

Mrs Mulkerrins insisted her brother take it and Mr Lane did so with the plan of bringing it back to the Treaty County.

“I wanted it to go back to Limerick,” said Noel, who would have hurled against a number of the 1973 team in the 1980 final and 1981 semi-finals. By coincidence the last two digits in his mobile phone number are 73.

“I would know a lot of them from playing golf and, of course, hurled on as well. I know how passionate JP McManus is about Limerick.

“When I was invited down to the South Liberties golf classic I said I will take the hurl out from under the bed and bring it with me. I was using it as a kind of weapon in case of any robbers coming in. I had it beside me. I respected it so much I had it in the bedroom,” said Mr Lane.

He joked that if any criminal knew he had a hurley under his bed signed by Pat Hartigan they wouldn’t break in!

“I had many the duel with Pat but, of course, never got the better of him. The hurley itself is a great hurley, I’m sure Pat would have been very happy to play with in 1973.

“I brought it down, presented it to Pat and chairman of the club, Albert Mc Sweeney. They were very grateful and I am delighted they are grateful. It is a happy ending,” said Mr Lane.

After studying it, Mr Hartigan confirmed its authenticity.

“It would be wrong to say I remember signing it because we signed so many. You would come across some hurleys in pubs with maybe one or two signatures but not the entire team. Everybody signed it including Declan, the selectors and mentors.

“If the golf classic didn’t take place and we didn’t invite Noel Lane - Galway have four All-Irelands in their history and Noel has three of them - down we would never have got the history of it. Declan was key there.

“When a factual story originates it is nice to bring it to fruition. A lot of people were in awe of it. The story starts almost half a century ago,” said Mr Hartigan.

Albert McSweeney, the chairman of South Liberties, says the hurley is in “mint condition”.

“I think it must have been in a glass case. You can make out every name. It is going to have pride of place in the clubhouse, I think we will encase it. It’s a lovely piece of history to get and totally unexpected,” said Albert.

And while everyone is delighted to have the hurley signed by the All-Ireland winning 1973 team home they all hope - even Mr Lane if his beloved Galway don’t win the Liam McCarthy Cup - a new piece of ash signed by the current crop of players will join it soon.

After the disappointing display against Tipperary Mr Lane – a former Galway manager – gives some hope to Limerick fans.

“I wish Limerick all the best, I hope their day will come sooner rather than later, no more than ourselves in Galway. I think Limerick aren’t that far away. I think they are better than they were last Sunday week and I think they will be a fair force in the back door. I wish them the best of luck,” said Noel.

Maybe, just maybe, the 1973 hurley will bring that badly needed bit of luck.